A grant application submitted in January by Colorado Central Telecom, with the support of Mount Princeton Hot Springs Resort and Chaffee County, would supply broadband service to Alpine and other Chalk Creek Canyon residents. Colorado Central Telecom is reaching out to the Chaffee County public for comment to bolster the chances that the county would receive the $1.62 million grant.

The grant is currently under consideration by the Colorado Department of Regulatory Agencies (DORA). The Chaffee County application faces competition from several other projects vying for DORA broadband grant funding. The state broadband board says that it will consider public comments regarding grant applications. 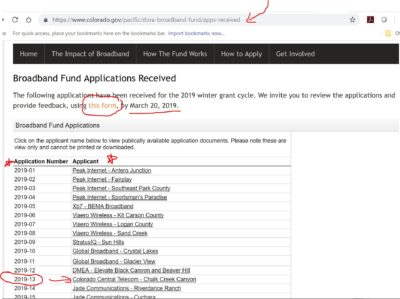 Residents of Chalk Creek located west of Mount Princeton Hot Springs are being urged to submit comments before the March 20 deadline. County residents who recreate in the canyon areas, and county businesses sending tourist into activities in the historic districts surrounding St. Elmo.

“The prospect of bringing broadband — which today is an essential utility, even if it is yet to be regulated as such — to an under-served area is exciting,” Commissioner Keith Baker said.

“There is a significant public safety dimension to the project, as many homes now rely on voice-over-internet for their telephone service, and the St. Elmo-Hancock-Tincup Pass area is one of our most heavily-visited destinations for heritage tourism and backcountry exploration,” said Baker.

This is Colorado Central Telecom’s second try at putting broadband up Chalk Creek Canyon. A previous effort to deploy broadband service to St. Elmo was abandoned due to legalities around right-of-way access. The current proposal uses county easements, thereby circumventing the right-of-way issue.

Though funding was not available to extend connectivity an additional 3.5 miles from Alpine to St. Elmo, Colorado Central Telecom says the proposed project would enable future broadband deployment for those last few unserved miles.

The case to complete broadband to St. Elmo is strong. Thousands of visitors flock to St. Elmo every year, but the ghost town lacks both cellular, broadband and landline phone service. This creates a major challenge for emergency first responders, who have limited communication options in the area.

Comments may be submitted at www.colorado.gov/pacific/dora-broadband-fund/apps-received. Those wishing to comment can follow the link on the site called “this form” to submit comments. The application number is 2019-13 and the applicant name is Colorado Central Telecom.

The public is being encouraged to include speed test results with their commentary because the state’s broadband map incorrectly shows internet service available in the Chalk Creek Canyon area.

“The broadband board really likes to see these speed test numbers from people in the community,” said grant writer Denise Shorey, who worked on the application on behalf of Mount Princeton Hot Springs’ parent company, Morgan Reed.

Shorey explained that the best submission comments should include speed test results from two sites, www.speedtest.net and http://maps.co.gov/publicspeed/.

“It may seem like a duplication of work, but the committee really respects the data from two different tests that show the same result, “ said Shorey. Those with questions can reach her at denise.shorey@e-luminosity.net.