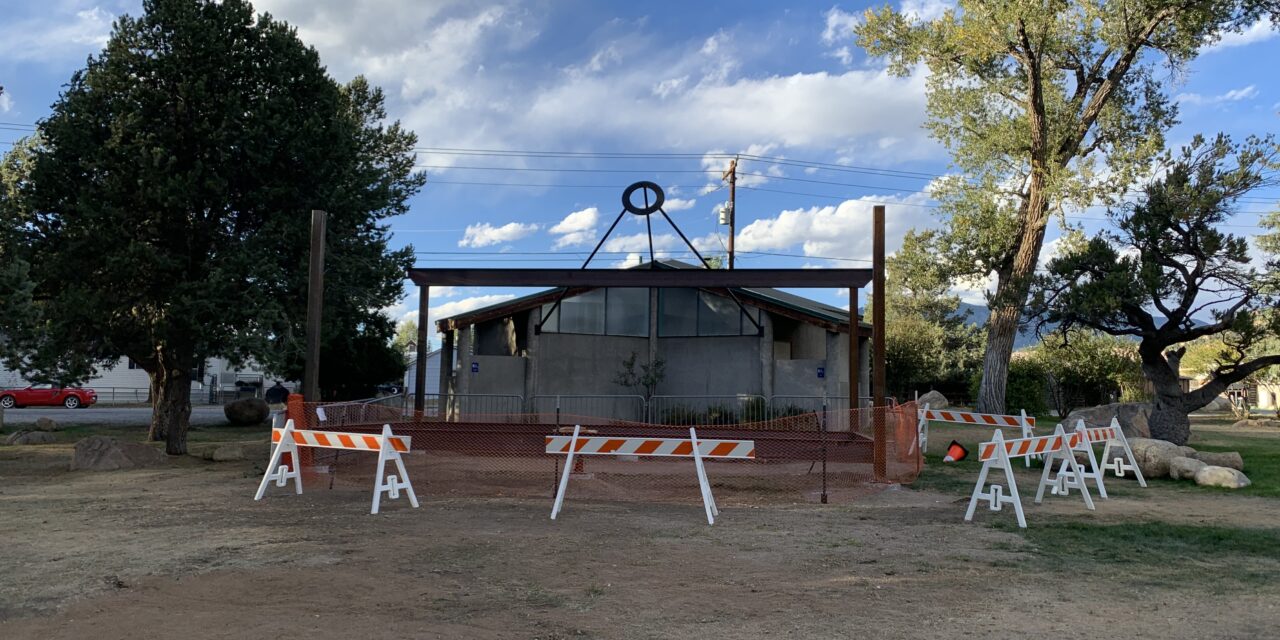 The McPhelemy Stage project is progressing smoothly as the town of Buena Vista (BV) continues to come together to make this long-time dream a reality.

With a projected completion date of October 30, 2022 there’s a lot to get done in a little time, but BV Recreation Special Projects Manager Earl Richmond says he isn’t worried. “The project’s going great! Everything is on track.”

Construction officially began on Sunday, August 21 after the BV Chamber of Commerce helped host an informal, yet emotional, groundbreaking ceremony.

“The groundbreaking in and of itself was amazing,” said BV Chamber of Commerce Executive Director Heather Rupska.

Since then, the concrete footers have been poured, several support beams have been raised, and metal supports have been attached to the existing bathroom building directly behind the stage. All construction work is being executed by Arkansas Valley Welding and Fabrication.

The idea for a stage at McPhelemy Park was conceived more than 15 years ago when local designer and builder Steve Jacobson brought the notion before the BV Recreation Advisory Board. Despite enthusiasm for the idea, the town was unfortunately not ready to tackle such a project at that time so it was put on the shelf. For those not familiar with Steve Jacobson, he is the architect and designer behind the BV Splash Park on East Main Street.

In 2018 the town decided to revisit the idea with the goal of creating a simple and small-scale stage; however, they quickly realized this plan wouldn’t work.

“There was a lot of desire right away to make it bigger,” explained Richmond.

Richmond said the Town and Recreation Department knew that if they were going to execute this project they had to do it right. This meant going back to the drawing board for funding and design ideas to create a stage that was big enough to serve McPhelemy Park the way it deserved.

For several years the project sat on the back burner with nowhere to really go. That is, until a little over a year and a half ago local arts and music lover Tom Rollings proposed reviving the project. With the help and input of local musician/Mountain Mantra founder Bill Kelly, and BV Chamber of Commerce Executive Director Heather Rupska, Rollings was determined to see this project become a reality. However, there still wasn’t enough capital funds to see the project through.

The whole project was projected to cost upwards of $60,000, no small amount of money for a special project in BV.

Undeterred, Rollings made a very generous legacy donation to the town of $30,000 to jumpstart the project.

Rollings, a former Special Education/K-12 teacher, has been involved in the performing arts and music scene in BV for well over a decade and founded the Buena Vista Events Cooperative (BVEC). The BVEC is a “nonprofit organization that sponsors live music and performance art in downtown Buena Vista for the benefit of locals and visitors alike.” according to BVEC’s contact page.

BVEC originally began with a stage beside the Pearl many years ago as part of the Colorado Main Street Program. This organization centered around supporting “community-led downtown revitalization” and helping “communities thrive by providing a customizable framework to focus efforts, energy, and resources to create a more vibrant community” according to Colorado Main Street’s website.

Rollings helped organized well over a dozen shows the first summer the stage beside Pearl’s was active. Money was tight so Rollings and his team brought in hay barrels for people to sit on and enjoy the show. Rollings recalls the joy of watching children dancing to the music all summer long.

“It’s just such as heartfelt emotion. It brings people together, it brings joy. Music is love,” Rollings explained with a big grin.

As enthusiasm for a permanent musical stage in town grew, Rollings and BVEC eventually moved to the Watershed Stage beside Simple Eatery and held musical and performing arts shows there for several years.

Currently, BVEC’s main stage is located behind The Roastery and hosts incredible local talent within Chaffee County. Saturday, September 10 marked BVEC’s final concert of the season as local Grateful Dead cover band Roundhouse Assembly took listeners on one last strange trip until next spring/summer. Rollings recalls the joy of watching mothers and daughters and families dancing in the sand in front of the stage.

“Music helps you figure out what’s important. It relieves the pressure of the day”.

Although the BVEC Stage is an amazing platform for local musicians, Rollings’ dream of a large, permanent stage for BV locals was slowly coming into focus. However, despite his generous donation, there was still a lot more funding needed to begin moving forward with the McPhelemy Stage project.

Moved by the amount of passion and love being put into this project, Rupska started brainstorming to find a way to help fund the rest of the McPhelemy Stage project. Rupska came up with the idea of selling personalized bricks to build a special walkway/patio in front of the stage. After crunching the numbers, Rupska, who is no stranger to large fundraising projects, projected that the Chamber of Commerce’s Legacy Brick Program could raise $30,000 to put towards project costs.

Despite some hesitation, Rupska was confident she could reach her goal.

The Chamber offered three different brick sizes over the summer and the deadline to purchase was August 15.

In order to insure this project would be funded, Rollings generously donated another $20,000 in case the Legacy Brick Program was unable to reach its fundraising goals.

Yet despite the odds, Rupska and the Chamber managed to raise an astounding $41,000 through their Legacy Brick Program.

“BV is an extremely generous community when they get behind something,” Richmond said with conviction.

Rollings says he shared his love for performing arts and music with his late wife Colleen who passed away in March 2022 from lung cancer. Toward the end of her life, Rollings said Colleen entertained the idea of donating money for a permanent stage in BV. To say this is a labor of love is an understatement.

“It’s the evolution of a dream and it’s coming to fruition,” Rollings beamed.

From the beginning, the McPhelemy Stage project has been about love, family, and community. “It’s [the stage] an iconic statement as to what this town is about: the people. The heart that’s in it will be felt for generations. But, tangibly, over and over again, it’s going to be a community gathering place,” said Rupska.

Through the intense collaboration of Rollings, Richmond, Kelly, and Rupska, the Chamber of Commerce and the Town of BV have become closer than ever before.

“It’s been amazing building a relationship with the Town,” added Rupska. She says she has also been moved by the opportunity to work so closely with Rollings, someone whose passion and love for this town is contagious.

“It’s been such a privilege and honor to develop our relationship over our time together. He’s 100 percent hands-on and we’ve become friends through the process. It’s his legacy,” Rupska said while fighting back a tear.

Rupska, Rollings, and Kelly regularly meet with Richmond to stay up to date on the progress of the stage and all say they are committed to the target completion date of October 30 of this year.

With the majority of the construction still to come, Rupska is confident the new stage is going to turn out even better than planned. “If you think my sketch is good, just wait till you see the real thing!”

With each passing day, it would appear the love continues to grow for the new McPhelemy Stage and with each new brick, the community appears to grow closer.

“We’re investing in Buena Vista,” said Rollings. “This community’s going to build a place to live, love, and celebrate. This community has a place for the performing arts. We have a place here.”

Featured image: The construction of the new stage at McPhelemy McPhelemy Park is proceeding on schedule, with completion expected around October 30. Photo by Landon James