Melvin Seals has been a powerful presence in the music industry for more than 30 years with a long-established reputation as a performer, recording artist, and producer. He brings his music to Buena Vista for a two-night run, Friday, Dec. 9, and Saturday, Dec. 10 in the Ivy Ballroom of the Surf Hotel. Doors will open both nights at 7:30 p.m. and the show begins at 8:00 p.m. 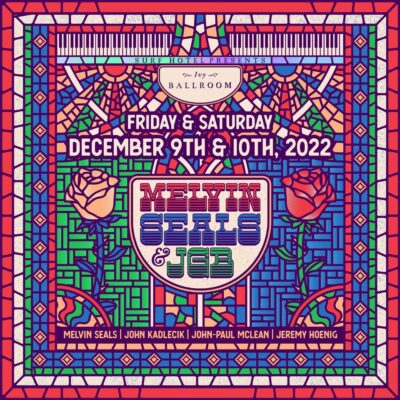 Melvin is most revered for his powerful, high-spirited, Hammond B-3 organ, and keyboards in the Jerry Garcia Band. Band members include: Melvin Seals on the Hammond B3, keyboards and vocals, John Kadlecik on electric guitar and lead vocals, John-Paul McLean on bass, and Jeremy Hoenig on drums,

Melvin spun his B-3 magic with the Jerry Garcia Band for 18 years and in doing so helped pioneer and define what has now become “Jam Band Music”.

From blues to funk to rock to jazz, Melvin Seals serves up a tasty mix with a little R&B and gospel thrown in to spice things up.

Melvin and JGB bring an intuitive, expressive style, soul, spontaneity, and remarkable chops to the table. John Kadlecik’s lead guitar and vocal duties, John-Paul McLean’s savory bass, Jeremy Hoenig on the drums, and, of course, a heapin’ helpin’ of the wizard’s magic on Hammond B-3 Organ and keyboards round out the sound.

Their chemistry is the focus from which they create a spontaneous and high art where the sky is the limit musically. They offer an exciting, often psychedelic musical journey featuring Grateful Dead faves that changes nightly and keeps the audience dancing and smiling (and some staring in amazement) for hours.

Concertgoers can expect a broad horizon mix of original songs in addition to both popular and obscure Jerry Garcia Band and Grateful Dead covers. The band has also been known to throw in song selections by bands like the Meters, Bob Dylan, and Rolling Stones.

Adding his rock-gospel-soul-rhythm and blues touch with his funky style of playing, no wonder Jerry nicknamed him “Master of the Universe”. Melvin continues to treat music lovers to his unique brand of melodic flavor with JGB.

Tickets are $70 single, $125 for both nights and all ages are welcome. Tickets may be purchased here: https://tickets.surfhotel.com/e/melvin-seals-jgb-at-surf-hotels-ivy-ballroom/tickets