The country-Western twang and Americana songs of Michael Martin Murphey and Carin Mari return to the Tabor Opera House in Leadville for the second year in a row, at 7:30 p.m. Friday, Aug. 23. Murphey’s opening act, backed by his Rio Grande band, is a shadowing of his creative relationship with Willie Nelson, once credited as birthing the modern Americana music scene in Austin, Texas. 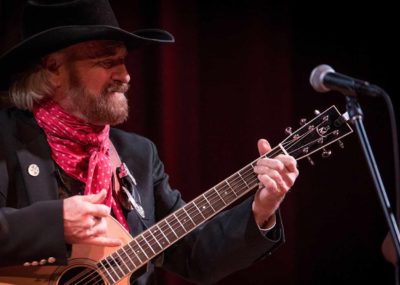 Murphey has released some 35 albums during his career, topping multiple music charts including international and national pop, country, bluegrass and Western music charts. His crossover hits include “Wildfire,” “Carolina In The Pines,” “What’s Forever For,” “Long Line of Love,” and “Cowboy Logic.”

He recently released Austinology: Alleys of Austin, celebrates his early days as a music pioneer with guest artists Willie Nelson, Steve Earle, Lyle Lovett and many more. Murphey says the album isn’t just a trip down memory lane; it illustrates that great songs withstand the test of time.

Accompanying Murphey is Carin Mari, a songwriter from the heart who friends say plays her own brand of music inspired by the mountains of Colorado where she was born and raised. She is a guitarist, singer and songwriter who has won numerous awards including 2009 Entertainer and Songwriter of the year from the NACMA, and Southwest Regional Winner of the Texaco Country Showdown. Carin and her two brothers performed coast-to-coast as the band “Carin Mari & Pony Express,” winning numerous awards and playing formidable venues.

Tickets are available online at www.TaborOperaHouse.net ($40) and the box office, 308 Harrison Ave., Leadville. For this special evening, concertgoers can arrive at 6:30 p.m., buy a $15 VIP Pass at the box office, enjoy drinks and snacks at The Jolly Cork, the Tabor’s updated South Storefront, then get early seating.