Militias are Unlawful in the State of Colorado 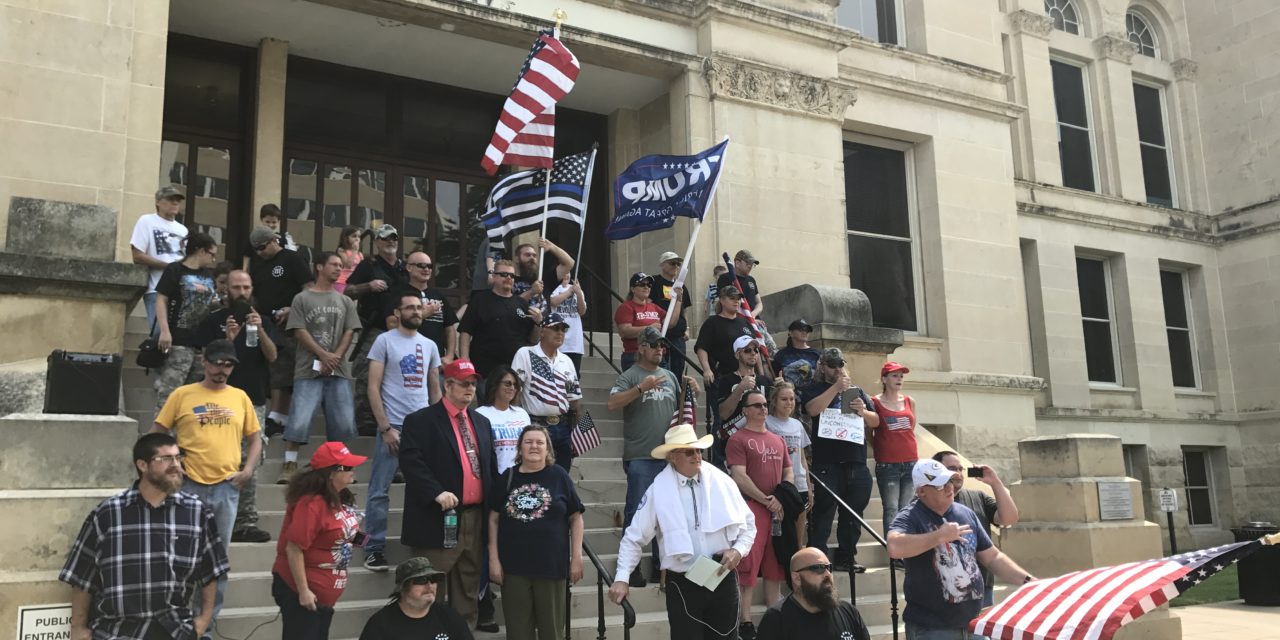 As the 2020 election looms, anxiety about the Nov. 3 election day, its results, and its aftermath loom. With a country deeply-divided over social issues, an armed element of the population, and a presidential candidate continuing to fuel doubts about mail ballots, and undercut his public health experts to call the surging COVID-19 pandemic a hoax, the situation is ripe for conflict.

The mix of guns, pandemic and election has been called”a toxic brew”  by experts in global conflict, who for the first time are turning their attention from third-world countries’ democratic processes to the U.S.

Already this fall, there is a widespread concern — particularly on the left — about the role self-styled militias could play after two protesters were fatally shot in Kenosha, Wis., earlier this year, and after the FBI says it thwarted a plot by right-wing militia in Michigan to kidnap Democratic Gov. Gretchen Whitmer.

The introduction of a recent article by the Anti-Defamation League mentions the Chaffee Patriot group, outlined in this Sept. 2020 AVV article. They introduced the subject of potential extremist actions this way:

“Like it or not it’s about to become a ‘significant time in American history’: Patriots vs. traitors…Start preparing now: food, ammo, fuel…ballots and/or bullets. God knows my heart, and my aim is true.”

Such a message would not be a surprising discovery on extremist platforms like Telegram or Gab, but we are increasingly seeing this violent and apocalyptic rhetoric on Facebook “Patriot” pages, populated largely by non-extremist users.

For those who may be unnerved by the rise of self-styled militia groups and patriot groups across the country, including an active Chaffee Patriot group, there is a growing sense of unease. But into this reality, the laws of our country come into play.

There are actually several laws on the books at both the national and the Colorado levels that prohibit the kinds of militia and paramilitary activity gaining traction among some right-wing groups.

First, these self-styled, private militias are unlawful in Colorado.

Federal and state laws generally use the term “militia” to refer to all able-bodied residents between certain ages who may be called forth by the government to defend the United States or an individual state. See 10 U.S.C. § 246.

When not called forth, they are sometimes referred to as the “unorganized militia.” A group of people who consider themselves part of the able-bodied residents referred to as members of the militia under state or federal law is not legally permitted to activate itself for duty. A private militia that attempts to activate itself for duty, outside of the authority of the state or federal government, is in fact, illegal.

The Second Amendment of the U.S. Constitution regarding the right to bear arms is often cited by advocates as the document that protects their right to form a private militia. It does not. 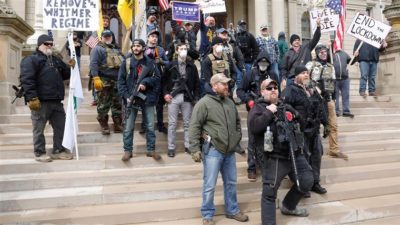 Not only are private militia not legal in Colorado, but all 50 states also prohibit private, unauthorized militias and military units from engaging in activities reserved for the state militia, including law enforcement activities. Some, including Colorado, also prohibit paramilitary activity during or in furtherance of a civil disorder.

Colorado’s laws are described below: 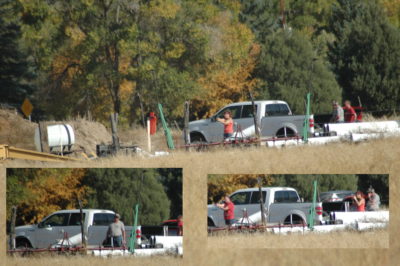 Target shooters practicing in Smeltertown in Chaffee County close to residential houses. The identity of this group is unknown. AVV image.

Colorado Statutes–Prohibition on paramilitary activity. It is a felony in Colorado to either:

(1) teach or demonstrate how to use, apply, or make “any firearm, explosive or incendiary device, or technique capable of causing injury or death, knowing “that the same will be will be unlawfully used in furtherance of a civil disorder;” or

(2) assemble“with one or more other persons for the purpose of training or practicing with, or being instructed in the use of, any firearm, explosive or incendiary device, or technique capable of causing injury or death to any person with the intent to unlawfully use the same in furtherance of a civil disorder.”Colo. Rev. Stat. § 18-9-120

How to determine if a group of armed militia is acting legally:

First, were they called out by the Governor or the federal government? Without that occurring, they are acting as an unauthorized private militia. 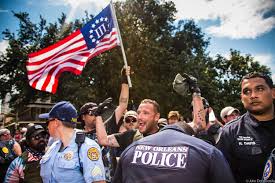 Three percenters rally at a recent protest, are friendly with police. Image by DeSmog

Yes, these groups have been seen to train together, dress in military-style gear, carry firearms, or engage in other paramilitary training techniques. But while they say they have some authority to engage in military and law enforcement functions (for instance claiming to protect businesses or doing “crowd control”), they in fact have no such authority.

Though these groups often engage in behaviors that show their intent to act as a private militia, this is the West – not the Wild West. Wearing military-style uniforms, tactical gear, or identifying insignia; wielding firearms or other weapons; and operating within a coordinated command structure or making statements that appear to direct the actions of others certainly suggest a private militia structure. But it is, in fact, unauthorized paramilitary activity.

What to do if you see armed people near a polling place or gathering space:

According to the Institute for Constitutional Advocacy and Protection (ICAP) at Georgetown University Law Center, there are several things you can do as citizens if you see armed people approaching a polling place or a gathering of citizens.

First and most important — document what you see:

➢What are the armed people doing?

➢What are the armed people wearing?

➢Are they wearing insignia? If so, what does it say or look like?

➢Are they bearing signs or flags?

➢Do they seem to be patrolling as a law enforcement officer might do?

➢Do they seem to be coordinating their actions?

➢Do they have a leader?

➢Are they stopping or talking to people outside of their group?

➢Do they appear to be provoking or threatening violence? If so, what are they doing specifically?

➢Are people turning away from the polling station after seeing or speaking with them?

Assistance is also available in other languages:

With this as background and the Nov. 3 election looming — where does that leave the Three Percenters … or Chaffee Patriots?