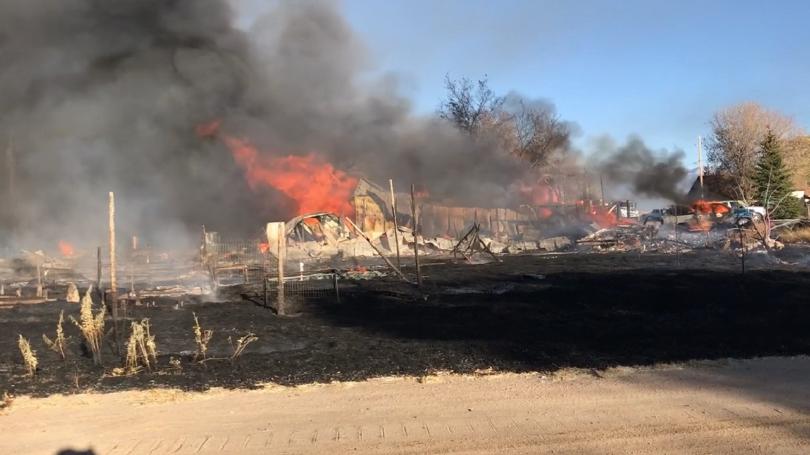 A fire raced through a block of the small San Luis Valley town of Moffat on Tuesday, Oct. 14, destroying three homes and leaving at least five residents homeless.

According to a press release from Saguache County Sheriff Dan Warwick, the fire was reported about 4:19 p.m. It began at or near a business know as Crystal Stix. The origin of the blaze is still under investigation.

Thursday, Saguache Sheriff’s Office spokesman Sgt. John Huffman told Ark Valley Voice the investigation is being conducted by the sheriff’s office, as well as the Colorado Division of Fire Prevention and Control (CDFPC). Huffman said although some victims have been identified on social media, the sheriff’s office was not “disclosing any names at this time.”

He also said crews were still on scene assessing hot spots from the fire and that a total of four structures were lost in the inferno. 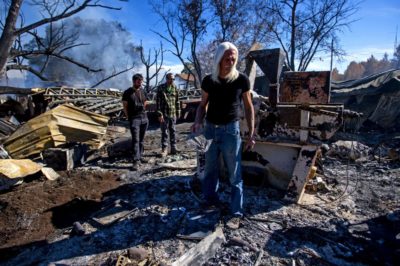 The Moffat blaze, which began late afternoon Tuesday, destroyed an entire block of the town. (Photo by Gazette)

Video on social media showed thick smoke spreading from the scene and the apparent explosion of a propane tank during the blaze.

Colorado Central Magazine publisher Mike Rosso, who’s very familiar with the San Luis Valley, said two friends of his were among the victims, losing their home, three dogs and all possessions in the fire.

A fundraiser was started on Facebook by Travis Rinaldis and Ryken Bristle’s daughter Stohry, who said they also lost all tools and equipment for their part-time businesses. The couple was not home when the fire began. They were in Colorado Springs, celebrating Ryken’s birthday when the fire spread from a neighbor’s home to theirs.

“My parent’s three beautiful dog’s lives were lost in the fire. Jilly Jane, Tina and Rowdy Girl, your companionship and love will never be forgotten and always be missed. Chickens were lost, and two cats are missing. Ryken and Travis were successfully starting a T-shirt screen printing company out of their garage. All the equipment was destroyed. My parents were also proud owners of a landscaping company that did beautiful work; sadly, all the tools for this were also lost. Artwork, pictures, childhood belongings [are] all in ashes, along with all the other things a family acquires after a lifetime of raising three kids together,” she wrote.

Moffat has no fire hydrants or a central water system. The local fire department’s 2,500-gallon tanker truck had to rely on local water wells to refill to try to control the blaze. One local press report said among the homes lost was the first home built in the town.

The American Red Cross is organizing help for the people who lost their homes, some of which burned to the ground.