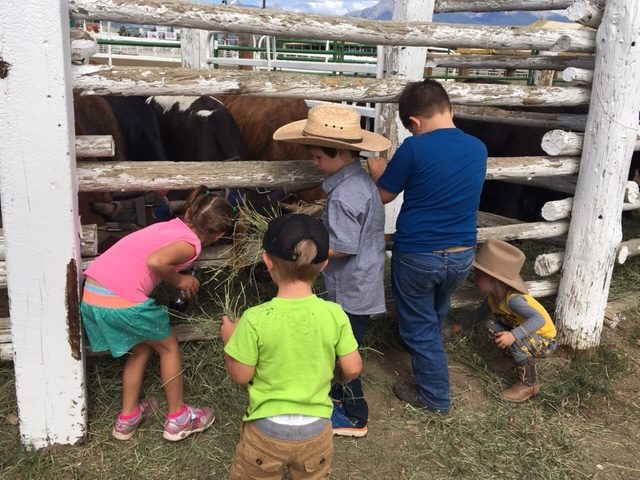 As the Chaffee County Fair wrapped up Aug. 5, a group of nervous kids lined up for the finals of the Muttin’ Bustin’ competition. At the same time while the greased pig competition, with three age ranges for the flock of kids waiting to participate. Both were an exercise in good plain country fun.

Ahead of the competition, extended families with youngsters milled about. The children were especially enthralled with the cattle. Five young cousins focused on pushing handfuls of hay through the fencing around a few steers. The children, Brooklyn Benesch, 5, Lane White, 2, Sawyer White, 5, Ryker Benesch, 7, and Craig Pryor, 3, didn’t even look up from their self-directed task. As they pushed the hay through the fence, the steers calmly accepted the donations, although the hay had come from the bale in front of them.

“We wouldn’t miss this fair,” said their moms in unison. “We get together here every year.” Asked where they were from, they identified hometowns of Loveland, Berthoud and Pueblo. 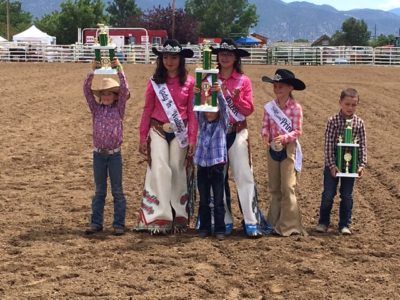 The Muttin’ Bustin’ event drew a crowd full of adults and kids in the new grandstands, as well as clustered around. Three winners were chosen from what began Saturday as 35 entrants ages 5 through 7, with the best 10 competing on Sunday. All the contestants received a competition fair belt buckle.

They were thrilled to get their trophies and a photo with the Chaffee County Fair Royalty; Queen Analyse Watts, Lady-in-Waiting Maia Lee and Princess Emma McWhirter.

Lee was crowned Chaffee County Fair Queen for the 2019-2020 season later that afternoon. 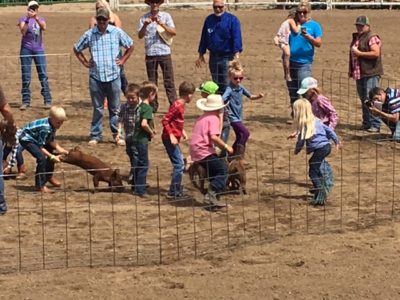 The greased pig competition was a slippery affair, with two groups of 10 kids per age group. Rules said that a five-minute limit applied, with whoever was in control of a pig receiving a Murdoch’s gift certificate.

The kids were persistent, with the most successful technique appearing to be catching one or two back hind legs and dragging the pig to a judge.

The young pigs were equally persistent in slipping out of the grasp of even the most determined child. For the most part, the five-minute rules were followed.