On Sunday, September 26, Salida’s own Jan Justis brought union organizer Mother Jones to the Leadville/Cork Twin City ceremony. Held at the Healy House Museum in Leadville, the event commemorates the Irish immigrants from Cork, Ireland who were part of the mining trade in Colorado. 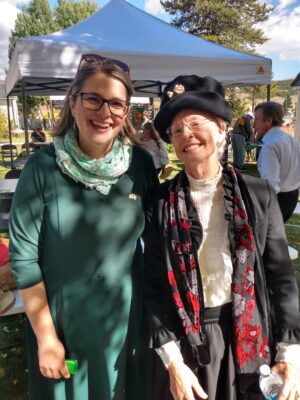 Mary Harris ‘Mother Jones’ emigrated to the United States from Cork in 1847, when she was 10 years old. Mother Jones became known as ‘the most dangerous woman in America’, focusing on organizing miner strikes, advocating for an 8-hour workday, and championing children’s rights.

Present at the event was Claire McCarthy, the Consul General of Ireland, Colorado State representatives, labor leaders, union workers, the Irish Network Colorado, and descendants of Irish immigrants who were part of the mining trade in Colorado.

The twin city ceremony was performed by the Mayor of Leadville, Greg Labbe, and City of Cork, Ireland council members (via Zoom). The Leadville-Cork Twin City program was spearheaded by Jim Walsh, professor of Irish studies at Denver University. Professor Walsh nominated Mother Jones to be the 248th inductee into the Mining Hall of Fame.