“Mud season” and what that means in rural counties 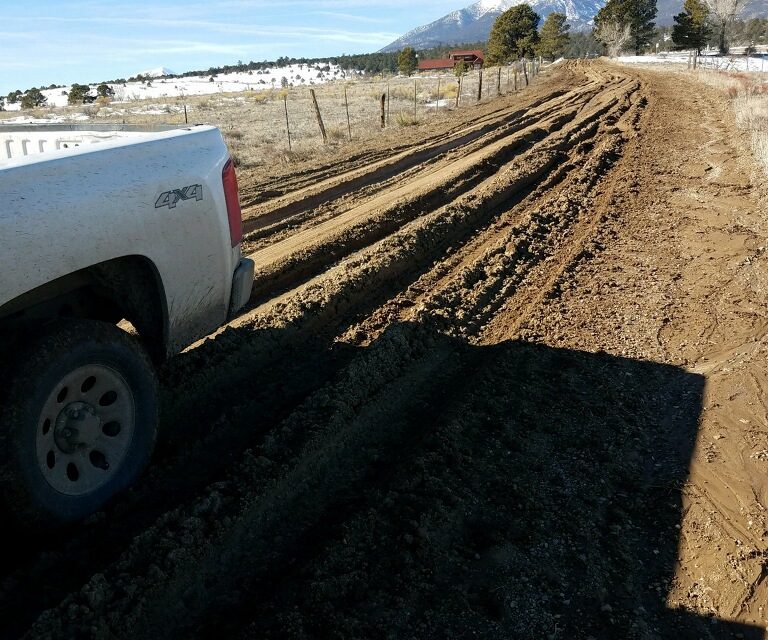 For the uninitiated, or for those who grew up in a city where all roads are paved, the season that follows a winter of average, to above average, snowfall is known as “mud season” for a very good reason. Judging from the calls coming into the county administration office, and directly to Chaffee County Road & Bridge Superintendent Mark Stacy, many residents of this county appear to have forgotten, or not known, what that means.

Outside the main valley in the canyons, most of the dirt roads have turned to mud. Stacy says one of the most common requests in those calls is to come to plow the mud off the road.

“I’m not going to plow the mud off the road right now – we need to have patience while it dries out and then the crew can blade it,” said Stacy, who that morning had been up C.R. 271 to Brown’s Creek to assess the road. “We’re going to get more snow, more moisture. If I plow the mud off the road, with the snow and snowmelt that is still coming, we’ll get more mud. Then we’ll basically lose the road.”

The atmospheric river that has streamed nearly continuously across Colorado since December has been a boon to help alleviate the drought, but it has loaded the slopes and turned dirt roads into mud that can run inches deep. Stacy said that with more moisture in general, this spring’s continuous freeze-thaw cycle is breaking up the paved roads, contributing to an above average number of potholes. At higher elevations, the frost has come out, making the surface conditions worse. An avalanche on C.R. 306 two weeks ago closed the road, far below the winter closure for the construction at the top of the pass.

While people who grew up here understand this season, those who have come from other places, especially from metro areas, seem to be struggling with mud season. 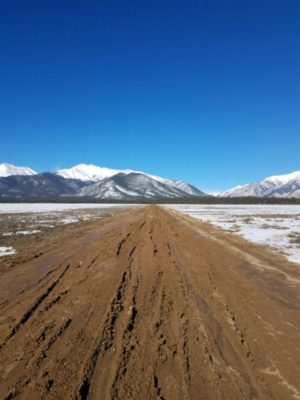 “People come here from the city, they don’t understand. Even if they grew up on dirt roads in the Midwest, they don’t understand the materials are different here,” said Stacy. “We don’t have the clays — the binders – that hold the road base. Our roads are decomposed granite. Without the binders, it decomposes faster, and you get potholes. I’d like a 7 percent PI (plasticity index) of clay in the gravel, when I can get it.”

“We’ve had days where several feet of snow has fallen on St. Elmo and C.R. 162 was down to one lane,” said Stacy. “We plow up C.R. 175 all the way to our county line and we’ve tried to get over a couple of times and help the folks who live a couple of miles past the line.”

The county road crew total 16; including six operators on roads from C.R. 162 to the south end of the county, and five working from C.R. 162 north past Granite. Stacy has a foreman in Buena Vista, an administrative person, a safety person and three mechanics who take care of all county vehicles. Stacy said that between the weather and a bad flu season (he’s had two to three people out sick on any given week), road crews have been working from early morning to late at night six days a week. “Between the staffing issues and the moisture, it’s like everything hit at once – the crew is tired.”

As to paving, Stacey said that he works up a plan, which changes every year. “We look at traffic volumes on the roads and the road conditions. I try to pave the main roads — like county roads 162, 140, 321 – with a two-inch mat asphalt.” 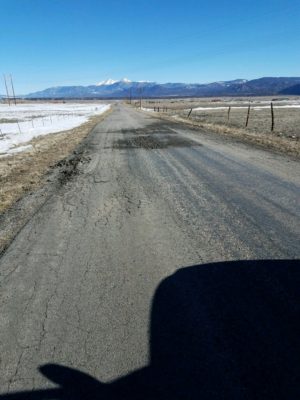 Chip seal roads in Chaffee County have many potholes. This view is C.R. 270 looking north toward Buffalo Peaks. Photo by Mark Stacy.

Stacy says the county’s paved roads were done when costs were down and it was cheap to chip seal and get rid of dust. “Now we have 150 miles of chip seal roads that I don’t have the budget to maintain. All chip seal is, is a protective wear surface for asphalt. It’s not designed to be pavement, but that’s what we’re using it for,” said Stacy. “A chip seal is only as thick as the biggest rock in it – so that’s about one-half inch thick.”

Stacy said that it will be another three weeks before the hot mix plants (there are two in the county — ACA and Hard Rock) go back into operation. The county has to wait until the local materials are available to get to work on the potholes.

Contrary to popular impression, most of the county road budget comes from the highway user tax fund (gas tax) not property taxes. “People think that road maintenance comes out of their property taxes and that’s just not true,” said Stacy. “ I get one mil of property taxes [for roads]. The rest is fuel tax, and PILT funds pay for the actual materials – gravel and asphalt – in the budget. (PILT stands for payment in lieu of taxes, a fund that compensates local government for the property taxes not received, where the vast majority of county land is state or federal lands.)

Asked about the current complaints, Stacy is sanguine; “People don’t know what it costs to have that road in front of their house. They don’t know what it costs to get that snowplow out there to plow. The expectations of the public are more demanding these days – they expect the same treatment from us as from CDOT” (Colorado Dept. of Transportation).

Stacy said the county has only a few agreements with other counties for road work. “We do C.R. 101, but it’s only a half mile long, then you’re in Fremont, so we take care of that. We have an agreement with Park County up at the top of Trout Creek Pass to cover Ranch of the Rockies. We have a few agreements with the forest service on outlying roads. In other places, there are roads we can’t get to. In Granite, we can’t cross the bridge to plow or grade because the bridge can’t take the weight of the grader.”

Stacy says he’s been so concerned about the road conditions that it’s been hard to sleep at night. His message to Chaffee residents; have patience. “We’re a long ways from out of the woods. The mud issue is because of the snowpack and the runoff – that will get better once we start getting warmer and start to dry out – then the motor-blades can swing into operation.”

In the meantime, remember – its’ mud season.