As President Donald Trump was standing in the Rose Garden at the White House, officially declaring the COVID-19 pandemic a National Emergency, the Chaffee Board of County Commissioners were finalizing a local disaster emergency declaration. The signed declaration was covered at the Chaffee County Public Health virtual town hall meeting at 3 p.m. today by the Chair of the B0CC Greg Felt.

The president, flanked by national public health officials and representatives of some national companies announced that the nation is moving to a full emergency status and taking steps to expand coronavirus testing for the highly contagious disease. The announcement frees up some $50 billion to address the crisis.

The disease has now expanded across more than 120 countries, infecting more than 125,000 people and killing people at a rate ten times that of influenza. The U.S. now has more than 2,300 cases, up one third in the past 24 hours. Twenty three states, including Colorado, are now operating under various forms of emergency management. 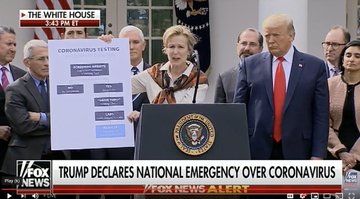 The messaging about test kits was similar to one delivered a week ago (apparently with no effect on the nation’s abysmal ramp-up of testing). This time, the involvement of retailers offering their parking lots for drive-through testing areas and the involvement of commercial labs for test kit production might yield different results.

In response to some actual action, the markets responded today with a nearly 2,000 point gain – among its largest in history. This followed yesterday’s 2,300 point, largest-in-history-drop.

The Chaffee County Local Disaster Emergency Declaration, issued under the authority assigned by the State of Colorado to local governments contains this sobering finding: “That Chaffee County Public Health and Environment anticipates that due to the contagiousness of the illness and the fact that numerous travelers from around the world visit the county, Chaffee County will see cases of the virus and its transmission within the community.”

The declaration establishes that given the contagion risks, that establishing social distancing parameters before we have a major outbreak is the wise course of action. It lists “cancelling and postponing large scale public events” as a logical and needed next step.

The announcement includes the fact that the BoCC will convene in its regular meeting room at the County Courthouse for the Tuesday, March 17 session, rather than in Buena Vista. The county plans to organize technology so as to be ready to move to virtual meetings. County offices will be open, but decisions on work-from-home arrangements will be made on a case by case basis. 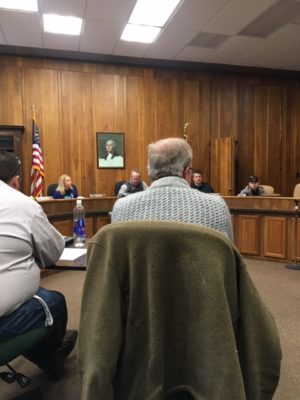 The decision to declare a local emergency followed a meeting Friday morning between Chaffee County Elected officials and the leadership of county departments. The room, full of dozens of county department heads and staff was sober, the mood serious.

The group discussed critical staffing functions, separating that which must be done for the local government to continue to function, as opposed to other perhaps important, but non-critical services.

Supervisors such as Chaffee Clerk and Recorder Lori Mitchell expressed concerns for their staff. “I’m worried about my staff – they come into contact with 50 to 100 people every day. I’m just saying that aggressive social distancing is where we are at right now.”

The Director of Chaffee County Public Health, Andrea Carlstrom agreed, saying “In the last 72 hours social distancing is becoming a cultural norm and it will be our reality for the next two to three weeks. It’s for us to take a proactive prevention approach, because we don’t yet have a vaccine and we don’t yet have a clear understanding of the virus.”

She pointed out that Chaffee can benefit from what other counties have already learned “Our Colorado friends in Eagle and Pitkin counties have been hit hard in last few days.”

Other managers, such as Salida Airport Manger Zeek Papp brought up that their public contact comes from far outside this county.

“Out there you never know where they’ve come from and where they are going, except the UPS plane coming in five days a week,” said Papp. “A lot of the pilots who come in are commercial airline pilots – just yesterday one came I who said ‘I was just in Detroit, Chicago, and San Francisco,’ and I said ‘Oh great – you should go home!’”

Sheriff John Spezze and Coroner Jeff Graf expressed concerns due to the close contact they and their staffs face; Spezze reminded the room that his jail staff get coughed and sneezed on all the time.

Graf said “We have gloves, but not full PPE (personal protective equipment). For John (Spezze) and I, if we go in without the appropriate gear – one accident could wipe out our department’s functionality.”

Felt and Chaffee County Director of General Administration Bob Christensen confirmed that the county is working on a general operational guideline document, to which department leads will be contributing department operation plans. Felt said he hoped that would be ready by Monday and once complete, confirmed that he expects it will be made available to the public so that reasonable expectations can be established.

Disaster response plans tend to focus on single-point disasters such as tornadoes and fires, while the COVID-19 situation is a full, countywide emergency and part of both a state and a nationwide health emergency. The effect of the county’s declaration today activated the recovery and response mechanisms of the Office of Emergency Response, the fire and rescue resources of the county, working with Public Health and Human Services. As in the case of the Decker Fire last fall, the Chaffee County emergency declaration is a seven-day, renewable order.