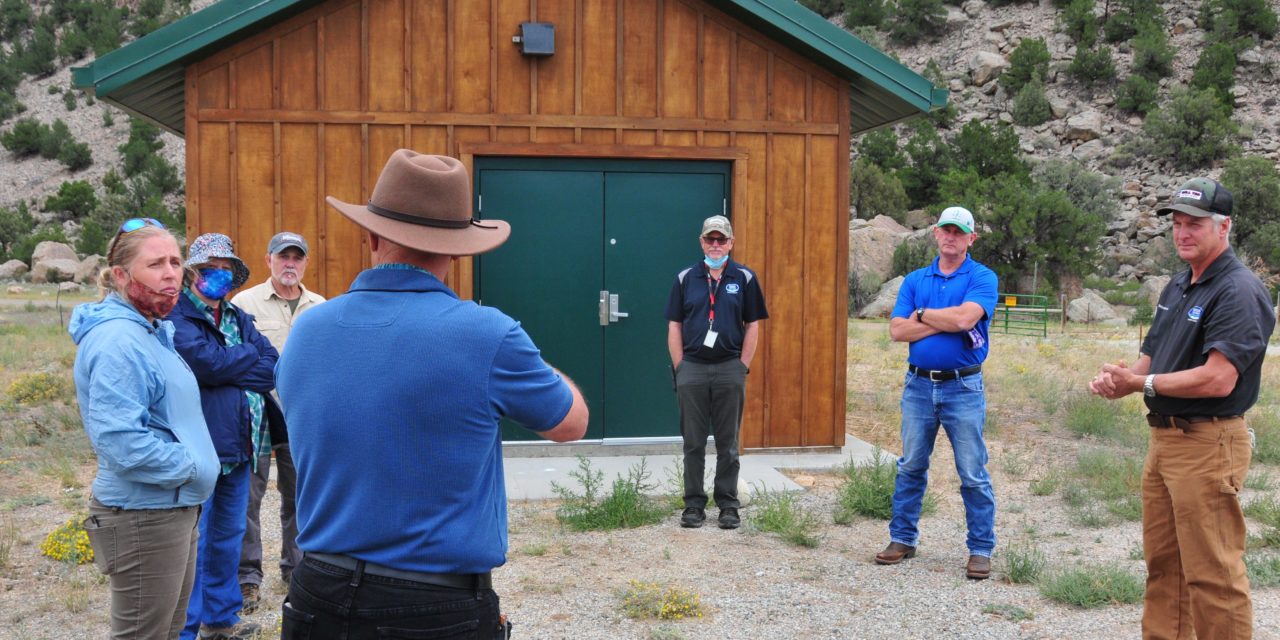 Editor’s Note: This is the third in a four-part series on the Nestlé Waters North America 1041 Permit Application. Public hearings on the permit are scheduled for next week, Oct. 20 and Oct. 22.

Chaffee County Commissioners regularly have to handle controversial issues – development of land, land use regulations, health regulations in the COVID-19 pandemic, to name only some.

The proposed renewal of a 1041 permit to allow Nestlé Waters North America (NWNA) to continue to pump water from the Ruby Springs Aquifer in the north county is one of the more contentious issues to come before the commissioners in recent history.

In earlier stories, we outlined the history of the Swiss multinational company which first obtained a 1041 permit in 2009 to tap into the spring to pump up to 65 million gallons of water a year from the aquifer that feeds into the Arkansas River. The permit was for 10 years.

The water is collected at a pumping station in Johnson Village, loaded onto tanker trucks and driven east on U.S. Highway 285 to a Denver bottling plant, where it is packaged as Arrowhead Spring Water in plastic bottles and sold in stores.

Nestlé wanted to simply renew the earlier agreement for another 10 years. But just as in 2009, many community members have raised protests mainly focused on environmental issues; from selling the county’s precious water resources in an expanding drought, to concerns over the proliferation of ubiquitous plastic bottles and their global pollution impact. Others concerns have been expressed about increased truck traffic on the state highway, whether the company has kept the terms of the original 1041 agreement, and what’s viewed by some activists as generating obscene profits from a locally vital resource.

For it’s part, Nestlé says that it is an environmentally sensitive operation. It has held to the terms of the agreement, and has voluntarily been a good neighbor. It has contributed to many community organizations and causes, including a $500,000 endowment to Salida and Buena Vista schools, besides paying hefty fees for water augmentation into the river for what it uses from the spring aquifer.

Nestlé spokesperson, Catherine Herter Ervin, told Ark Valley Voice they have also given $25,000 to the Chaffee County Community Foundation: $10,000 for the GARNA/Chaffee Green Waste Audit Study and $15,000 to the Emergency Response Fund.

The main opposition comes from the organization calling itself Nestleave! Unbottle and Protect Chaffee County Water. It is headed by Tom and Francie Bomer, along with spokesperson Jennifer Swacina. They have teamed with 350 Central Colorado to voice opposition to the permit renewal for another 10 years.

Swacina, with a background in journalism and environmental studies in college, said she learned to speak truth to power from her mother.

She said she was not here when the original 2009 permit was granted by the then Chaffee Board of County Commissioners, but heard about the renewal effort and decided to get involved knowing, she says, that Nestlé had a bad track record about caring about “profit over humanity…”

She then provided an example. “Starting in the the 70’s how they convinced people in Africa they could not trust their own breast milk. There’s a correlation here that they’re telling us we can’t trust our tap water,” she said. (Nestlé was promoting the sale of baby formula over breast milk).

“Taking perfectly natural things and privatizing and making money off them …. I don’t trust them,” she added.

Swacina has been instrumental to the opposition group by requesting records and documents from officials reaching back to a decade ago to the present time. According to Swacina, she doesn’t believe Nestlé has kept all the original pact requirements.

She also questioned whether a conflict existed when one of the Chaffee Planning Commission members, Mike Allen (whose company early on acted as a consultant for Nestlé) acted on behalf of the applicant at the same time he was serving on the Planning Commission.

“I have nothing to lose, nothing to gain, I didn’t want to call out community members but …. I’m telling the truth,” said Swacina.

She has also questioned the data from the hydrological studies and monitoring wells (mostly overseen by Nestlé), and added, “The county, I’m sorry, is not even capable of providing oversight over a multi-billion dollar corporation like Nestlé.”

On the side supporting a continuation of the 1041 permit for another 10 years is Terry Scanga, head of the Upper Arkansas Water Conservation District. He says Nestlé in is compliance with the 1041 permit, as far as its use of the water it pumps.

“As far as the water is concerned (because I don’t know the other pieces of that), in term of water they’re in compliance,” he said. “Compliance in the 1041 permit for them is; one, you have to have an augmentation plan decreed and they do …. number two, that the replacements would be made with trans-basin water and not native water, and number three, that replacement would be made above their wells. They’re compliant.”

In terms of water supply, Scanga says he doesn’t buy the argument that prolonged drought in our area of the state will have a detrimental effect on the spring.

“You always are either going into a drought or coming out of a drought in Colorado,” said Scanga. That’s the history of Colorado.”

One major source of water here is snowmelt, he noted. It melts rapidly, so storage and the building of reservoirs “has always been preeminent, in water resource management, and it’s even more important today.”

“So the district has a policy of requiring that we keep two to three times as much water in storage as our annual demand, and we do that.”

“Since 2009 we have had some very wet years and some very dry years,” said Scanga. “I expect that same thing will continue – I don’t think you’re going to see it any different than it has in the past…”

What’s changed, he said, is the amount of development in the area. Meaning that while traditionally, agriculture was the largest water use for the county, the kind of growth the county is seeing means demand will shift to serve a growing municipal use.

Scanga said he believes water demand can be met in Colorado well into the future; with a small reduction in agricultural use balanced with increased urban demand.

Nestlé has test wells around the drainage basin in the area above the Ruby Mountain Spring, he said, that supply data for the district for  a pilot project, on alluvial water, examining storing water underground.

Monitoring wells used by Nestlé show that the spring is doing well and that the integrity of the well water is confirmed.

With a spring flow estimated at about 12 cubic feet per second, that means 24 acre-feet per day by Scanga’s math, or about 8,700-plus acre-feet annually. He said Nestlé is currently using up to 196 acre-feet per year. Even if Nestlé went to the full 65 million gallons per year allowed by the current 1041 permit, said Scanga, (they pump much less than that now, but could increase) it would amount to a very small percentage (less than three percent) of the spring’s production potential.

Commissioners will hears presentations from staff, Nestlé and the opposition group, as well as take public comments in person and online over the two days of hearings.

Due to recent increases in cases of COVID-19 in the county, the public hearings set for the proposed permit renewal Oct. 20 and Oct. 22 have had rule changes, limiting the number of participants allowed in person at the Chaffee County Fairgrounds.

Residents can view the proceedings on ZOOM and, officials say, will be able to provide comments during those online session, in addition to providing written comments. See a related Ark Valley Voice story and the county website for details.

Next, we’ll examine some of the comments already made and review more main points from both sides.