The newly-elected Buena Vista School District board members were sworn in at the start of the Dec.1 board meeting on Monday, Dec. 2, signaling the next era of collaborative board work. Chaffee County Clerk and Recorder Lori Mitchell did the swearing in of the entire group of five board members who were re-elected or elected in the Nov. coordinated election. 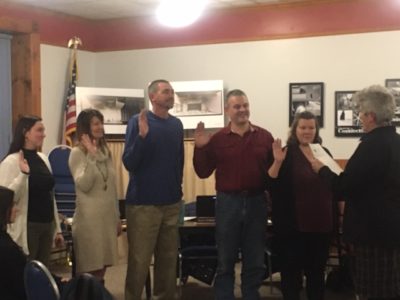 Superintendent Lisa Yates presented outgoing board members Nancy Best, Erin Flavin and Leslie Quilico with commemorative school bells, commenting that “For our gift to you we chose a bell, for its significance to schools. We can imagine kids running down the road to the bell to school. A bell awakens, invites, calls, sounds the beginning. I have to say I am impressed with how well this board has worked together through challenges.”

Following a reception for outgoing and incoming board members, the board elected new officers for the coming year. Suzette Hachmann was re-elected President, Ken McMurry Vice President, Tracy Storms as Secretary and Jessica Crites as Treasurer.

Next on the agenda came the Educational Showcase, which featured seven Buena Vista Community Education Assistance Fund (CEAF) grants; representing close to $10,000 for projects proposed by BV School District teachers to aid instruction in their classrooms, and engage students in learning. CEAF Board members Dan Potter and Arla Page handed out the certificates, noting that while there were fewer awards, that some of the projects are larger than in years past. 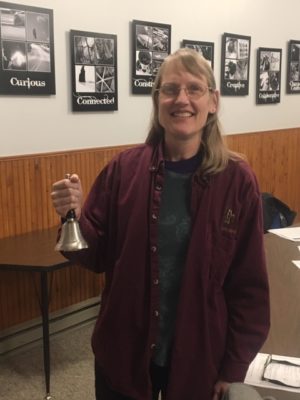 One popular project grant awarded to Heidi Ada, a Buena Vista fifth grade teacher, purchased a giant Colorado floor mat, some 14′ x 21′ feet in size. “I went through a training to use it– it’s portable,” said Ada. “I wanted it at my disposal so when I’m teaching railroads, regions, latitude and longitude, its visual. It requires teamwork and the kids loved it. It requires lots of critical thinking skills and the rest of the school can the school can use it as well.”

Other grants included a “diversity through school literature” project that provides literature with diverse characters matched to every grade level. It means that every grade will have grade-level appropriate books representing diversity for the libraries and each classroom.

Another grant application funded “human-read” audio books for kindergardners through high-school age students, under a Title I grant for multi-sensory readers. The audio books are designed to improve a student’s ability to decode letters and words, increase reading fluency and comprehension.

A grant was awarded for a filmmaking project for teaching the visual languages in the school’s performing arts department, another for bongo drums for the music department (required for nearly every concert piece), and a third grant was awarded to the athletic department to fund a hamstring machine. The machine is expected to decrease athletic injuries in students doing strength and conditioning exercise who overdevelop their quad muscles, leading to hamstring injury.

A final BVCEAF grant was awarded to fifth grade teachers Bonnie Grover, Joy Duprey and Becki Cummins for their project known as   “ CaveSim — Bringing Science Home.” The portable cave, created by an MIT grad, teaches cave ecology through computer simulations, with a goal of getting through the cave. Students learn how to squeeze through tight spaces, how to climb and rescue, and the importance of bats in the environment.

Among other business items on the agenda, the Director of Early Childhood Lynell Denton reports that it has applied to the state for 104 preschool slots, adding 16 additional preschool slots representing $68,500 in state funding for a total of $368,132 in state preschool funding. While last year Buena Vista received temporary state funding, this year that funding has been moved to permanent status, allowing the county to place many families into the program tuition-free due to the Colorado Preschool Program funding. “Our goal is to keep tuition at low cost,” said Denton. “This is a big deal for this area.”

With the winter weather, she noted that kids throwing snowballs can be a hazard, so a low-cost solution has been found. “The McMurry’s brought over eight bales of hay, we added snow ball targets and now that’s the only place to throw snowballs.”

Chaffee County High School Interim Principal Christine Bailey discussed graduation guidelines for their career pathways graduation certificate, which is set to begin in 2021. While it’s been discussed for the past couple of years, the number of credits and the routes to graduation and what constituted the intense skill level course work for certificates were in flux.

“So there are three pathways for graduation,” explained Bailey. “The University pathway is 50 to 55 credits. The Associates pathway is 34 credits focused on core credits. The Career pathway is 34 credits with at least four credits of English. We set that because we shouldn’t be holding senior’s hands as they prepare for senior pathway. Plus 10 credits that are a mixture of CMC classes, and internship hours, and taking advanced classes in their skill [area].

A motion to develop a written policy regarding the career path to become part of a future consent agenda was made by Erik Phillips, seconded by Tracy Storms and passed unanimously.

Brett Mitchell was approved as the board’s representative to the Mountain Boards of Cooperative Educational Services (Mountain BOCES). The board moved to executive session with a motion by Ken McMurry, seconded by Brett Mitchell, which passed unanimously.