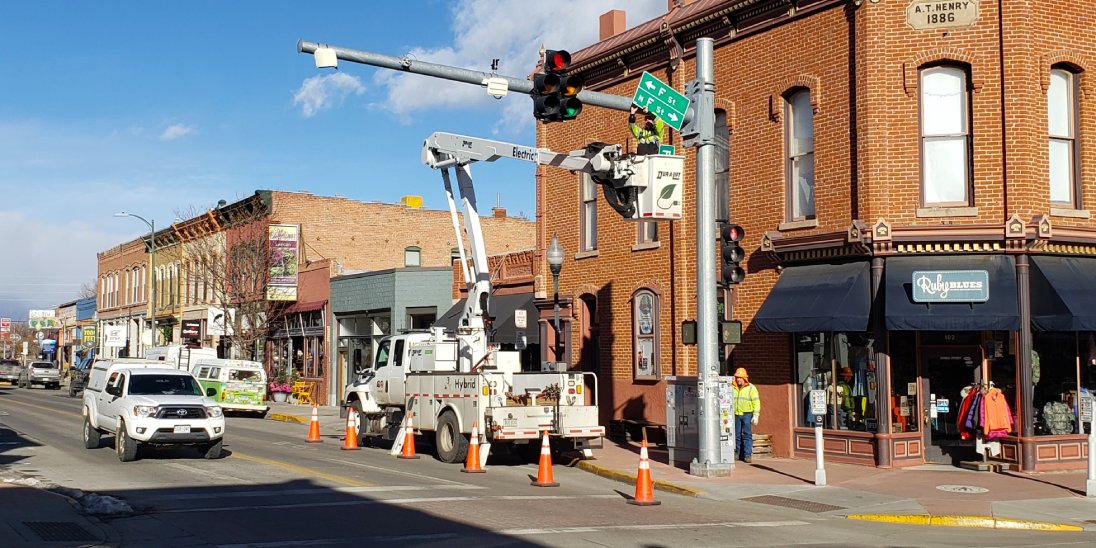 Mid-morning today, Jan. 10 a crew from the Colorado Department of Transportation, Traffic Engineering Division out of Alamosa, Colo. arrived, setting cones in place at the First and F Street intersection. Not long afterwards, the first of a pair of signs were hung on the traffic light arms, clearly showing North F Street (towards S Mountain) and F Street (traveling south and “up” F Street). 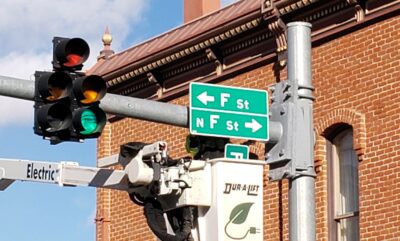 Long-time locals take it for granted. But how many newcomers or tourists know that First Street is the dividing line between street number addresses that are “north” and those that are just “plain” numbered addresses with no directional?

A single missed digit is enough to throw off the new USPS mail carrier or FedEx driver. Google maps may or may not give you what you’re looking for.

If you’re driving, you could end up circling a few blocks using trial and error and if you’re on foot on a scorching summer afternoon or hunkering down against a windy winter’s day, this is even more frustrating.

123 F is the address for Edward Jones Investments

118 F is the address for Four Winds Gallery

101 N F is the address for the Twitchell Building with its colorful, vintage “Enjoy Salida” mural

101 F  is the address for Krivanek Jewelers – just across First Street, on the corner.

If you’re coming into Salida from either east or west on First Street (aka CO HWY 291), approaching the major (and only) traffic light downtown, making a snap decision to turn left or right could be hazardous to your health or the many pedestrians, pets, e-bikes, scooters, and skaters trying to cross in all directions.

It all Started Last July

Last July, AVV was approached by Linda Frances, long-time artist and owner of Four Winds Gallery at 118 F Street. “I am constantly being asked by confused visitors for directions to locate an address on North F Street,” she said. Many of the older business buildings in the 100 block of North F just have (often faded) numerals over their doors; no easily spotted directional. Other shopkeepers who are out on F Street opening up their businesses, as well as joggers and dog-walkers also report being asked for help in the hopes that they are “locals”.

Following up, AVV contacted David Lady, Director of Public Works for the City of Salida with a suggestion for new signage. Lady promptly forwarded the idea to the local CDOT maintenance manager for their review and consideration.

Salida Public Works and CDOT to the Rescue

The wheels of government agencies often turn slowly and it took a while for the proposal to wend its way through the Colorado Department of Transportation (CDOT) which controls U.S. 291 — even the short stretch that we know as First Street in Salida.

On Sept. 7, the CDOT Region 5 Traffic & Safety Program Engineer replied that the “request for the North F street sign, is being reviewed by our engineers.” In mid-November, a follow-up from David Lady noted that the project “had been approved and was in the CDOT work queue.”

Today, Jan. 10, 2023, Salida’s turn came up for CDOT to install the signs. CDOT employees John, David and Doug (the bucket lift operator/installer), explained that it’s not as easy as it might sound. Traffic Engineering needed to approve the sign wording and agree that the new wording would help and not distract drivers.

The signs themselves are made in a CDOT sign shop in Denver, which had been backed up for some time. Finally, materials, crew, and an open time slot came together (and fortunately on a sunny, balmy day with little wind to get in the way of progress).

Told of the news, artist and Four Winds Gallery owner Linda Frances was delighted. “Just yesterday, a man approached me looking for places that sold art and jewelry downtown. He had a list of names, but couldn’t locate them all, so I set him straight, as always,” she said.

Thanks to concerned residents, together with prompt action and consistent follow-up by the City of Salida Department of Public Works with CDOT, hopefully, the new signs will help locals give better directions, allowing newcomers and visitors to find their way a little easier.