In a bittersweet goodbye, Mayor P.T. Wood received gifts from city staff and council. “Thanks, you guys, it’s been just truly a pleasure to work with you and staff and to serve the city that I love with all my heart,” said Wood.

Shore then led his first meeting as Mayor where the council held the second reading and public hearing on Ordinance 2021-17. This ordinance amends Chapter Six and Chapter 16 of the Salida Municipal Code concerning short-term rentals (STRs). Council voted to approve the ordinance. 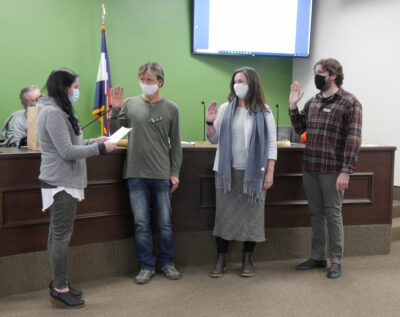 Harald Kasper, Dominique Naccarato and Justin Critelli being sworn in on November 16. Image courtesy of the City of Salida.

During council reports, Councilperson Critelli explained, “I wanted to reflect back on why it made sense for me to run. I want to be a part of this for the next four years. While we have done so much, now it seems like we are still back to the same things that made me want to be on council to begin with. A couple weeks back we had a business owner refer to homeless people as ‘freeloaders’ and complain that they were living in their car, and I just wanted to remind people that I lived in my car when I first came to town here.”

“I’m one of those ‘riff raff’ and I’m on council because I was given a chance to contribute to this community. Good thing I wasn’t chased out with a broom, like other communities might do,” he added. “I look at my business and a lot of people are looking to my business yet again for housing solutions because they need a bed. So, where we’ve done so much, we have so much more to go. I think it is so poignant to have a council that keeps that in mind, that we don’t necessarily have a tourism problem. We have a locals problem.”

Critelli continued “That local’s solution is dwindling. I see a lot of young folks, millennials, Gen Z that are leaving in droves that want to contribute to this community (and were) and literally just didn’t have as much as a place where they can safely park their car to sleep … [There’s] this rhetoric that is seeping back into the dialogue, which is: ‘those people’  or ‘the takers vs makers’. I will continue for the next four years to fight for the people that serve tourism and keep this place from becoming an automated theme park.” 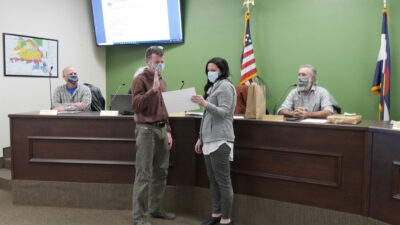 New Salida Mayor Dan Shore being sworn in. Image courtesy of the City of Salida.

Mayor Shore added to Critelli’s report “If I were to reflect back it would be: let’s get to work.”

“First off I just wanted to say how honored I am to be sitting up here with such an amazing group of people and amazing staff,”he added. “We can get a lot of stuff done and I am really looking forward to being your mayor. I really hope people will reach out and share their ideas and concerns. I am definitely going to have very much of an open-door policy.”

Shore continued, “We are wrapping up on the assessment with that third-party investigative firm [regarding the September 23 incident at Salida High School]. We hope to have a preliminary report shortly, at which point we will get together with the school board.”

“Secondly in regard to the original skate park; we are still waiting on final reports on the October 26 accident there and our condolences continue to go out to the family. I want to assure everyone that we are not having discussions behind closed doors, we are simply taking the time to grieve this tragedy and wait for these reports to come in,” said Shore.