No Name Evacuated as Grizzly Fire Grows, I-70 Remains Closed 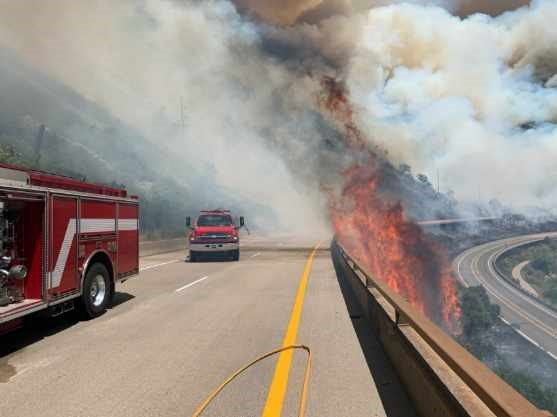 The Grizzly Creek Fire in Glenwood Canyon is spreading and residents of No Name are being evacuated as the fire spreads southward. 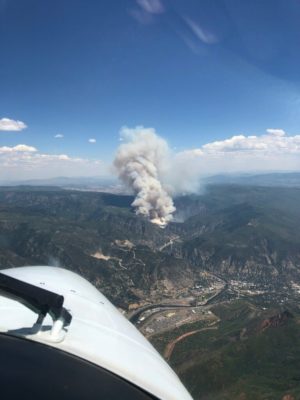 As reported by Vail Daily a short time ago, the Grizzly Creek Fire Incident Command has directed an evacuation notice for the residents of No Name. At this point in time, the Glenwood Springs Community Center is the emergency relocation point and shelter.

The stretch of I-70 in Glenwood Canyon from exit 116 to exit 140 remains closed to traffic in both directions. The fire began from a lightning strike and yesterday grew from 100 acres to 1,300 acres.  The name of the fire which began as the 120 fire was changed yesterday to the Grizzly Fire. No word is available as to the extent of its expansion today.

Yesterday afternoon the hiking route to Hanging Lake in the canyon was closed as the fire grew. Hikers there reported that in the space of little more than 15 minutes Hanging Lake went from clear blue skies to dark smoke.

Today, Fire Incident Command reports that the fire is moving uphill on the south side of the Colorado River. The command has expanded evacuation notices to include the residents of Lookout Mountain as well as a pre-evacuation of Bair Ranch.

Traffic this afternoon is reported to be bumper to bumper over  Cottonwood Pass moving both directions, made worse by a semi trailer rollover between Garfield and Eagle counties around 3 a.m.

Eagle County Emergency Management Director Birch Barron advised county commissioners this morning that when Cottonwood Pass reopened only smaller vehicles capable of maneuvering the tight roadway should attempt the route. “And you can expect some serious traffic,” he said.

Meanwhile, the Colorado Department of Transportation (CDOT) in a press release advised motorists to avoid Cottonwood Pass altogether, as well as Independence Pass. except for local traffic only.“CDOT asks that motorists not use Cottonwood Pass or Independence Pass as detour routes, as these roads are not built for heavy traffic or commercial oversize vehicles,” CDOT said in its latest release.

Traffic heading to the southwestern and western portion of the state is being detoured. One route recommended by CDOT is to head south on U.S. 24 through Chaffee County to U.S. 50 in Poncha Springs, so traffic in  the county may be heavier than normal this week.

This afternoon, as reported on the Glenwood Springs Fire Department Facebook page by traveler Starla Quealy, “We just came over Cottonwood Pass to Eagle! Bumper to bumper traffic both ways!”

The Grizzly Fire now has its own Facebook page: https://m.facebook.com/GrizzlyCreekFireCO/