NORAD’s ‘Santa Tracker’ Up and Operating for 65th Year 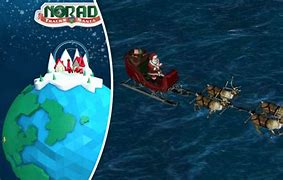 For the past 65 years, North American Aerospace Defense Command (NORAD). located at Peterson Air Force base in Colorado Springs, has tracked the movements of Santa Claus, as he leaves the North Pole to travel around the world on his mission to deliver presents to children every year on Christmas Eve.

NORAD began simulating the tracking of Santa Claus, in 1955, when a local department store printed the wrong phone number in one of their holiday ads. A child called the number on Dec. 24 of that year, reaching NORAD. It was the cold war and the red phone that rang wasn’t one that rang much, unless there was a national emergency; meaning it could be the President of the United States on the line.

Instead, a small voice asked  ““Are you really Santa Claus?”

Rather than hanging up, Lt. Colonel Harry Shoup , who was then a 38-year-old father of four,  took the call, and reassured the child that Santa was indeed going to find him this year. He came to be known as Santa Colonel.

That began an annual effort reassuring children that “American forces would ‘guard Santa and his sleigh on his trip to and from the U.S. against possible attack from those who do not believe in Christmas.'” It was the cold war, so there was a clear allusion to atheistic Soviets and their fellow Communists. 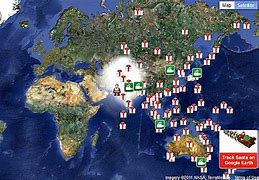 This community outreach function of the North American Aerospace Defense Command  is a  popular volunteer activity, involving more than 150,000 military and civilian volunteers in the United States and Canada.

Beginning at 6:00 a.m. Eastern Time on Christmas Eve, kids of all ages can call 1-877-HI-NORAD or send an email to noradtrackssanta@outlook.com to receive updates on Santa’s location.

The program starts on December 1, but the actual Santa-tracking simulation starts on midnight of December 23. As we write this, Santa is heading for Dushanbe, Tajikistan and has already delivered  2.1 million gifts.