North side of Decker Fire at 14 percent containment 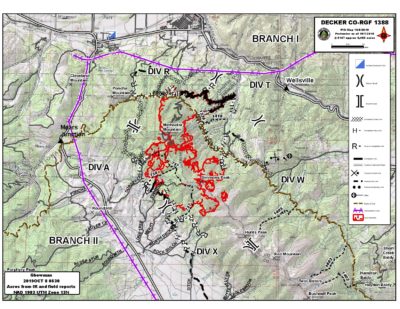 The Decker Fire Incident Command is nearly at full strength with 896 personnel in the fight. As of this morning, the fire has burned 6,482 acres. It was started by a lightning strike in the wilderness area nine miles south of Salida on Sept. 8.

Firefighters in Division R and T are reported to have made substantial progress yesterday in holding fire from the canyon areas of Wellsville, Swissvale and Howard. Crews created a direct hand line (a hand-built fire containment line) that wraps around the top and the “arm” of the fire that had reached down toward Wellsville. They’ve also constructed a hand line that starts at the tip of that arm moving south along CR 101/49 in conjunction with a dozer line running from the southeast toward the Rainbow Trail. A large section of this is now considered contained (shown as the black line on the fire map).

Division X crews kept building indirect lines when the terrain nearest the fire is so rugged that fire crews can’t get in to establish direct lines using existing trails and roads. Division A crews built a fire line along a ridge toward the telecommunications repeater on top of Methodist Mountain. 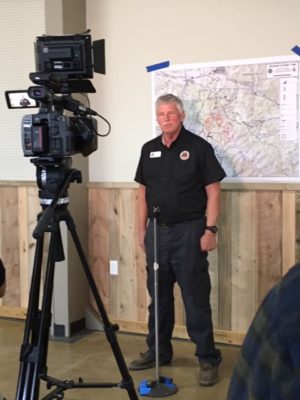 Incident Commander Jay Esperance took command of the Decker Fire on Monday. This is not his first fire in central Colorado. Esperance commanded the response to the Hayden Pass Fire in 2016. (Photos by Jan Wondra)

Incident Command says Tuesday’s efforts will continue the work that began yesterday, securing a direct line n the north side and northeast side of the fire. Crews will also be doing “mop-up” along already contained areas. In this work, ground crews work in tandem with aerial water drops to fully extinguish smoldering materials. It ensures that partly-burned logs can’t roll into unburned areas, searching for roots that might be burning underground, only to burst into flames later.

Also on Tuesday, crews will begin doing chipping operations along CR 101/49 that will take several days. Division W  will be improving both hand and bulldozer lines between Howard and the fire. Division X crews are working the hand line close to the fire’s southern edge. This will strengthen the Bureau of Land Management (BLM) roads and hand lines that run along the fire’s southern edge.

While structural protection crews remain in the neighborhoods around Howard, pre-evacuation orders were lifted in some areas yesterday. Officials are assessing whether they can be lifted in other areas. 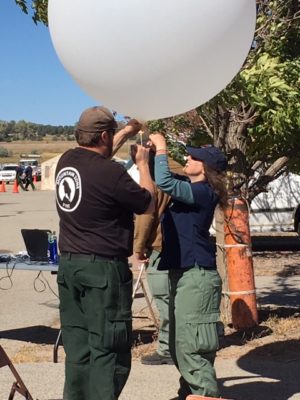 National Oceanic and Atmospheric Administration Meteorologist Aviva Braun, adds radiosonde equipment to the weather balloon launched Monday afternoon over Chaffee County. Braun is one of 98 professionals across the nations who rotate in to provide weather forecasting for fire fighting operations,

The experts say that all handwork, bulldozer work and aerial operations will create a backfire line that will assure that an area doesn’t have enough fuel left to reignite. The operations depend upon weather conditions. As these occur, Salida residents may see increased smoke.

Wind gusts today, as with yesterday, are expected to be strong, with gusts up to 40 mph on the ridges. Winds will be from the south/southwest, a continuation of the unstable atmospheric environment, and the county will remain dry. Incident command expects that it will be issuing Red Flag Warnings both today and tomorrow. Thursday, a cold front is forecast to move into Colorado, bringing snow, rain and a hard freeze.