Oath Keepers Leadership Indicted for Seditious Conspiracy for Role in Jan. 6 Attack on the Capitol Several members of the right-wing organization the Oath Keepers have been arrested in connection with the Jn. 6, 2021 attack on the Capitol. This includes Stewart Rhodes, the founder of the Oath Keepers, who has been indicted for seditious conspiracy. He was arrested by the FBI this morning in Texas.

Other members of the Oath Keepers organization, arrested earlier on other charges have now also been charged with the same charge of seditious conspiracy for their roles in the overtaking of the U.S. Capitol. But this was the first time that Rhodes and another Oath Keeper member, Edward Vallejo of Phoenix were charged. 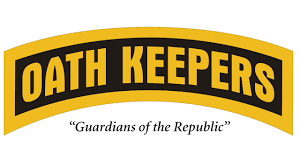 For an outraged, significant portion of the public waiting for more arrests in connection with the attempt to stop the certification of the Presidential election, Rhodes’ arrest is one of the most significant so far.  Among his many comments inciting violence, Rhodes allegedly wrote in a “Leadership Intel Chat” on Signal on Dec. 31, 2020, just days before the Capitol attack:

“We aren’t getting through this without civil war. Too late for that. Prepare your mind, body, spirit,” he wrote, according to the indictment. “It will be a bloody and desperate fight. We are going to have a fight. That can’t be avoided.”

According to a news piece by the Huffington Post, he added that there was “no standard political or legal way out of this.”

It’s been six months since another Oath Keeper member agreed to cooperate with the federal investigation, which apparently implicated Rhodes. The cooperator, Mark Grods, was part of the Oath Keepers military “stack,” the formation that moved deliberately through the mob, and on up to the doors of the Capitol, becoming part of those who first charged into the building. He testified before a grand jury on a plea deal.

Around that same time, the phone of one of the Oath Keepers’s attorneys was seized in connection with the federal seditious conspiracy probe. The case against the Oath Keepers lays out how former President Donald Trump’s rhetoric fueled their actions on Jan. 6. In fact,  the Feb. 2021 article points out that the Oath Keepers website told members it was “CRITICAL that all patriots who can be in D.C. get to D.C. to stand tall in support of President Trump’s fight to defeat the enemies, foreign and domestic who are attempting a coup, through the massive vote fraud and related attacks on our Republic.”

The Oath Keepers were not the only militia groups in Washington, D.C. taking part in the attack on the Capitol. As prosecutors and independent reporting have indicated, the Proud Boys and members of the Three Percenters, had also planned out their activities for that day as well. This move comes only a week after U.S. Attorney General Merrett Garland’s speech in which he said that the Department of Justice (DOJ) would continue its investigation and would work to ensure that all those, at whatever level, would be brought to justice for the attack on the U.S. Capitol and the attempt to halt the certification of the election.

The U.S. does not have an actual criminal law defining domestic terrorism; which is why the charges are identified as seditious conspiracy.  This makes an interesting situation given that the Department of Justice just last week announced the formation of an individual unit specifically to address domestic terrorism. Since 9-11, the DOJ has been focused on international terrorism, but the number of domestic terror investigations launched by the FBI has more than doubled since March 2020. In fact, domestic terrorism has now been identified as the country’s number one security threat.

Featured image: Oath Keepers at the Capitol. Image Courtesy of the Insider.