Oct. 19 is Colorado “Slow Down, Move Over Awareness Day

A proclamation signed by Governor Polis, officially declares October 19, 2020, as “Slow Down, Move Over Awareness Day”.

Together with AAA Colorado, the Colorado State Patrol, Colorado Department of Transportation (CDOT), and law enforcement agencies across the state are teaming up this weekend in an effort to educate the public about new changes to this lifesaving law – and some of that education will happen through enforcement.

“When you see lights flashing on the roadside, that’s your cue to slow down or move over,” said Shoshana Lew, CDOT Executive Director. “Not only is it the law, but it’s also respectful to our first responders and maintenance crews who risk their lives on our roadways to keep us safe.”

All 50 states have some version of the “move over” law, with one existing in Colorado for over a decade. But 30 percent of American motorists do not know their state’s law.

For over 10 years, Colorado drivers have been required to move at least one lane away from any tow truck, emergency vehicle, road crew, or public service utility vehicle on the shoulder with its emergency lighting illuminated. That law was updated in Colorado on Sept. 13, 2020 to include specifics related to the speeds and speed limits when passing an emergency, tow, or maintenance vehicle. 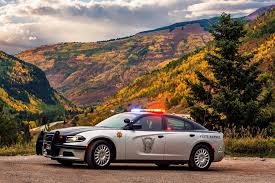 The Colorado Slow Down, Move Over law now states:

“Adjusting your driving when someone is on the side of the road is not only common courtesy, it’s the law,” said Chief Matthew Packard, Colorado State Patrol. “Follow the law and save a life. These tragedies do not have to happen if drivers move away and slow down near roadside workers.”

Agencies and officers are planning to use social media to put out reminders and education about the “Slow Down, Move Over” efforts taking place.  In addition, high visibility enforcement will be conducted by multiple agencies across the state throughout the weekend.

All of this leads up to Monday, October 19, 2020, “Slow Down, Move Over” Awareness Day.  The goal of the campaign is widespread education so every Colorado driver will be aware of the updates to the law that keep emergency personnel, tow operators, road crews, and public service utility personnel safe while performing their jobs.