As the COVID-19 pandemic deepens, and state and local public health departments and officials have come under attack by those who refuse to accept scientific evidence, struggling with slashed budgets, surging demand, and threats to their workers’ safety, another trend has emerged.  Public Health programs in the U.S. have begun to see a surge in enrollment across the country.

The pandemic realities don’t appear to be deterring this new crop of students who are entering Public Health Masters Programs at a rate 70 percent higher than prior to the coronavirus; determined to make a difference. 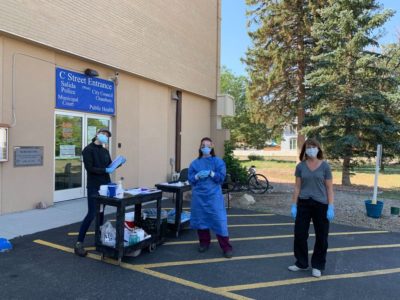 According to the Association of Schools and Programs of Public Health, as reported by WTKR television in Virginia, there was a 20 percent increase in applications to master’s in public health programs in that state for the current academic year, growing to nearly 40,000.

Some programs are seeing even bigger jumps. According to Brown University,  applications to Brown University’s very small master’s in public health program rose 75 percent. Demand there was so high as the pandemic hit full force in the spring that Brown extended its application deadline by over a month. Seventy students ultimately matriculated this fall, up from 41 last year.

Such dedication to a mission to help people is commendable, especially given the reaction of a segment of the population that is determined to believe that COVID-19 is a hoax and that their individual rights trump others right to live, in the face of a virus that has already taken more than 247,000 American lives.

Public health is not a field you would think would be vilified. After all, these are the people who do school immunization programs, conduct parenting classes, arrange senior living seminars, protect water safety, investigate food contamination, conduct hearing and visual programs, and give you vaccinations for exotic diseases so you can travel to Timbuktu.  They write grants such as the Housing + Health grant recently received by Chaffee County to help educate people on the importance of safe housing to family security. They run youth programs and partner with as many community entities as they can to fulfill their public health mission.

But this year as the pandemic has continued to impact nearly all facets of daily life, things changed. In county after county, and state after state, public health directors have been called names, vilified, their cars were broken into, their offices and homes vandalized, their lives threatened; all because their job is to keep the population safe.

The attacks on the reputation of public health professionals aren’t just coming from virulent anti-truthers; delusional COVID-truthers who don’t believe that the virus is real and have taken to trying to gain entry to hospital Intensive Care Units to “prove” that they are empty and that COVID-19 is a hoax.  The disrespect is coming from some elected leaders at local levels.

Only two weeks ago, Chaffee County Director of Public Health Andrea Carlstrom, mentioned that two more Colorado county public health directors had resigned, and they weren’t the first to do so. Carlstrom herself has faced social media harassment from some Chaffee Patriot Facebook group members.

In some counties that lean Republican, strident and vocal residents have attempted to force public health to back down on public health orders intended to reduce the spread of COVID-19; taunting them over facemask orders, refusing to limit in-person occupancy in restaurants, and holding rallies that exceeded crowd size limits. In Douglas County, CO, the Republican county commissioners were so incensed by Tri-County Health public health orders that they pulled out of the public health partnership, only to quietly rejoin it a few weeks ago.

The case of Emily Brown, the Director of Public Health in rural Rio Grande Colorado is one nearby example. She and her other public health officials were attacked on Facebook posts: including a photo of her and other health officials with comments about their weight and references to “armed citizens” and “bodies swinging from trees.”  Instead, when she needed more support, Rio Grande County Commissioners fired her for imposing public health orders that were, in their view, too hard on the population.

The majority of what Lori Tremmel Freeman, CEO of the National Association of County and City Health Officials called an “alarming” exodus resulted from increasing pressure as states reopened when public health cautions were seen as not needed. Three of those who resigned were members of her 27 member board of directors and well known in the public health community — Rio Grande County’s Brown; Detroit’s senior public health adviser, Dr. Kanzoni Asabigi; and the head of North Carolina’s Gaston County Department of Health and Human Services, Chris Dobbins, who was named Public Health Official of the year in 2017. At both the state and federal level, security details have been assigned to top public health officials, as one particular political party, egged on by no less than the president of the United States,  have participated in threatening public health officials.

Those challenges have not stopped the flood of people seeking to become public health professionals. Some of them come with majors such as biology, medical technology, and biochemistry. Others who had majored in diverse majors such as water engineering, who had been planning to work in global public health, have decided to get public health degrees to allow them to work closer to home in the U.S.

“People interested in public health are interested in solving complex problems,” said Annie Gjelsvik the director of the Brown University Public Health Program. “The COVID pandemic is a complex issue that’s in the forefront every day.”


The U.S. public health system has been starved of funding for decades

The interest in public health is strong, but it faces a headwind of funding as it confronts the worst health crisis in a century.

This funding crisis is facing a virus that has sickened at least 11 million in the U.S., killed more than 247,000 people. Yet public health employees persevere, even when state and local government health workers on the ground are sometimes paid so little, they qualify for public aid.

There are two sides to this public health coin: yes, there will be room for these new professionals when they arrive. The average age of the public health workforce is now more than 50 years old. The challenges are daunting, but the dedication of these new recruits is encouraging.

Given the current COVID-19 pandemic and the health crises that might be coming in the future  — we’re going to need all of them, and more.