As we begin a new year and a new decade, some perspective is in order. We have arrived at 2020; 244 years after the Declaration of Independence, 231 years after the ratification of the Constitution, 100 years after the passage of the 19th Amendment that finally gave women the right to vote, 50 years after the terms ‘global warming’ and ‘climate change’ entered our lexicon, and are now led for better or worse by our 45th president.

The next 100 days could shape several years of the United States. We are approaching our 24th United States Census. There are already attempts, by Republican-controlled state legislatures and foreign entities, to suppress the turnout. In 2018 we had a population of 327.2 million. Among many adjustments influenced by the new count, the results will likely shift congressional representation at state and federal levels.

President Donald Trump has been impeached by the U.S. House of Representatives, and we face a Senate trial. We are barreling toward the 2020 Presidential Election primaries.

This republic could still be called an experiment – a reference made by no less than 16th President Abraham Lincoln in his 1863 Gettysburg Address, during the depths of the Civil War. By all accounts, the nation is now at its most divided since the era of the Vietnam War. Division is not new in America. 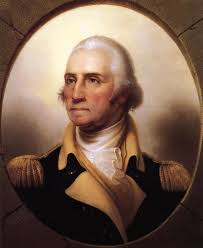 George Washington as leader of the Continental Army. Image in the public domain.

President George Washington, himself no stranger to divided times during the Revolutionary War, pointed out the rift between the Patriot stalwarts striving for liberty, and the percentage of the population undermining the revolution who remained Tories, loyal to King George III. These Tories and the colony/state entities in which they lived, profited off selling supplies to the British, while refusing to sell supplies to Washington’s Continental Army. They refused, even as Patriot soldiers with no shoes, clothing, or food were starving at Valley Forge, leaving bloody footprints in the snow as they marched.

It was at that juncture that Washington became a strong advocate of a federal government. He recognized that were it in place, it would have better supported the push for liberty and probably shortened the war for independence. It is also at that moment that Washington revealingly commented that “Anger is contagious and it breeds hatred.” He cautioned against the emotion because it meant that people were not listening to each other, while fostered prejudice. 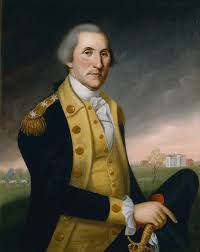 Washington as leader of the Continental Army. Image in the public domain.

The differences between then and now are many; but Washington was on to something. He was a citizen-statesman, whose watchwords were liberty, truth, and duty. In contrast, our current president seems to operate on the words of greed, lies, and self-interest.

It seems unlikely that our first president would have condoned the behavior that is being normalized by the 45th person to occupy the office of honor crafted by Washington. One wonders, if President Donald Trump had been around in 1780 during the Revolutionary War, what he would have been doing.

This year the Merriam-Webster Dictionary, based on extensive data, selected the word “they” as their 2019 word of the year. “They” is a plural pronoun to refer to a single person whose gender identity is non-binary. It can also be a word dividing one from another, marginalizing those who are different from us. It’s a word that stands for “other”, used incessantly by our president to blame others, to shirk responsibility, to justify incomprehensible positions, actions and prejudices.

“They” is a surprising word choice – but surely representative of the increasingly fractured atmosphere in which we are living and attempting to coexist. I wonder what Washington, the patrician Virginia planter who came to value his poor, desperate, barefoot and nearly naked soldiers more than his own life — for whom “we” was the collective “us” – would have thought of that word’s current use?

Washington resigned his commission leading the Continental Army at the close of the war in 1783, and assumed that he was returning to private life. Long before he was selected as our first president, his thoughts  and hopes for the new nation are laid out here in his Farewell Circular to his Army and State Governments: http://www.loc.gov/teachers/classroommaterials/presentationsandactivities/presentations/timeline/amrev/peace/circular.html

A noteworthy segment: “There is an option still left to the United States of America, that it is in their choice, and depends upon their conduct, whether they will be respectable and prosperous, or contemptible and miserable as a Nation … to give such a tone to our Federal Government, as will enable it to answer the ends of its institution … according to the system of Policy the States shall adopt at this moment, they will stand or fall, and by their confirmation or lapse, it is yet to be decided, whether the Revolution must ultimately be considered … a blessing or a curse, not to the present age alone, for with our fate will the destiny of unborn Millions be involved.”