Our Voice: Call Them What They Are — American Domestic Terrorists

At some point, we need to call them what they are: American domestic terrorists. They are angry, self-righteous, ill-informed, heavily armed and formed into their versions of militias —  increasingly subject to manipulation both by the right-wing of the Republican Party, the president, and our foreign adversaries, including Russia. 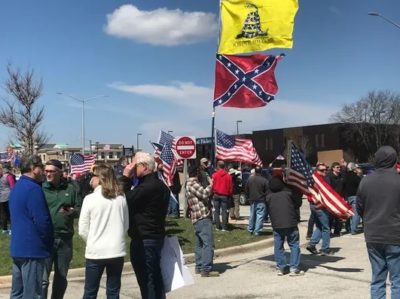 The protests in Wisconsin, a state that fought for the Union in the Civil War, oddly included confederate flags. Courtesy photo.

If anything they are more dangerous than Timothy James McVeigh, who blew up the Alfred P. Murrah Federal Building in Oklahoma City in 1995, killing 168 people and injuring more than 680 others. He was one man back in 1995, when there were isolated groups of American anti-government protest groups. Most of us — back then — tended to think of them as nut cases.

Now, across America, leaders and ordinary citizens need to recognize the threat that is organizing: hundreds of thousands of extremists, armed and beginning to affiliate, bent on causing violence, destruction, and chaos, the opposite of civil society. In Minneapolis, Denver, and multiple cities across America this week, peaceful protests in the wake of the death of George Floyd, have been highjacked by right-wing extremist militants.

This coming week, Ark Valley Voice begins what will likely be a long-term series on right-wing extremist groups, written by Stephen Hall with research and resource support by our Thinking Security columnist Adam Silverman.  The country is only 156 days from the 2020 election and their emergence is no accident.

Most of us aren’t trained to recognize their tattoos, their signals, their code words. We surely weren’t aware in 2016, that the favorite symbol of a circle made with his thumb and first finger made by President Donald Trump was a dog whistle; a signal to White Supremacists.  Not long after, the Charlottesville white supremacist rally occurred.

But then again, most of us are law-abiding citizens who understand that the world we live in is pluralistic, that facts are facts, science is science, and that we in America are actually blessed, compared with most of the world.

These extremist groups are moving beyond obscure symbols to action against a changing world they wish not to accept and against those who don’t agree with them. They are not “somewhere else.” They are here. 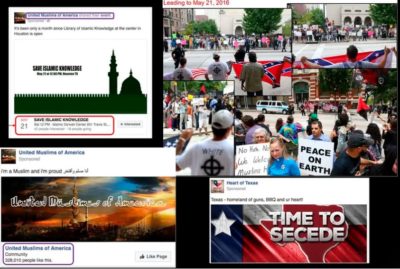 Screenshots released by Federal lawmakers of Russian linked Facebook Pages promoting anti-Muslim and pro-Muslim rallies on the same day in 2016 in Houston, TX.

They are menacing legislators doing their jobs, ignoring social distancing orders intended to keep us all safe, name-calling, and spitting on those wearing facemasks. They are roughing up news media for wearing facemasks who are there to report. In fact, facemasks have been made the symbol of extremist opposition.

Their latest statement where COVID-19 cases spike; refusing to cooperate with contact tracing, a proven public health method to contain the spread of disease.

These groups spout a favorite word “Boogaloo” –far right slang for the civil war against our government advocated by extremists. And they have other names for their wished-for violent uprising — “Big Igloo” and Big Luau” (complete with Hawaiian shirts and body armor) are examples.

While the pandemic is not “red” or “blue”, increasingly across the country, anti “Stay-at-Home” and anti “Safer-at-Home” protesters are ramping up their calls for violence against Democrats, even as states relax the coronavirus restrictions they are protesting.

The pandemic public health crisis has become not the reason — but an excuse — to assert grievance.

Now, it seems, protest isn’t enough  — they want those who don’t agree with them to die. Anti-lockdown protesters in North Carolina, a husband and wife team Adam and Ashley Smith (co-founder of “Reopen NC”) a North Carolina Facebook group devoted to opposing pandemic-related restrictions, have incited violence. Adam Smith posted a Facebook Live video last Friday saying he and other activists were “willing to kill people” over coronavirus restrictions.

“Are we willing to kill people? Are we willing to lay down our lives?” Smith said in the video. “We have to say, ‘Yes.’ Is that violence? Is that terrorism? No, it’s not terrorism. I’m not trying to strike fear in people by saying, ‘I’m going to kill you.’ I’m gonna say, ‘If you bring guns, I’m gonna bring guns. If you’re armed with this, we’re going to be armed with this.'”

Another man, Couy Griffin, who happens to be a New Mexico County Commissioner and calls himself the leader of “Cowboys for Trump” is a self-described Trump superfan. On, May 17, he made the case that Democrats should die.

“I’ve come to a place where I’ve come to a conclusion where the only good Democrat is a dead Democrat,” said Griffin, to cheers at a rally at a New Mexico church. He was there to defy a public safety order pertaining to the coronavirus.

Griffin let that sink in, then telling The Daily Beast on Tuesday that he only meant Democrats who were dead in “the political sense”. The tactic of shock language followed by feigned contrition is a common Trump tactic.

“I could’ve chosen different verbiage, you know,” he told The Daily Beast on Tuesday. “I guess I need to be more careful when I choose the words that I speak. But you know, it’s just so hypocritical of the left how they’re blowing this up like I’m some hate-speech murderer.”

He repeated his claim that “the only good Democrat is a dead one” and signaled that he still thinks some top Democrats—such as governors Ralph Northam (D-VA) and Gretchen Whitmer (D-MI)—could be guilty of treason and the punishment that comes with it. “You get to pick your poison: you either go before a firing squad, or you get the end of the rope,” said Griffin. When asked whether anti-lockdown protesters are increasingly considering violence, he replied “I’ll tell you what, partner, as far as I’m concerned, there’s not an option that’s not on the table,” Griffin said.

Yesterday, Trump actually retweeted that message under the title “The only good Democrat is a Dead Democrat”.

While these extremist groups might sound silly, they are anything but. As this coming week’s series will present, it’s time to take their threats seriously.