Our Voice: Lacking Words to describe the Russian Siege of Ukrainian Cities 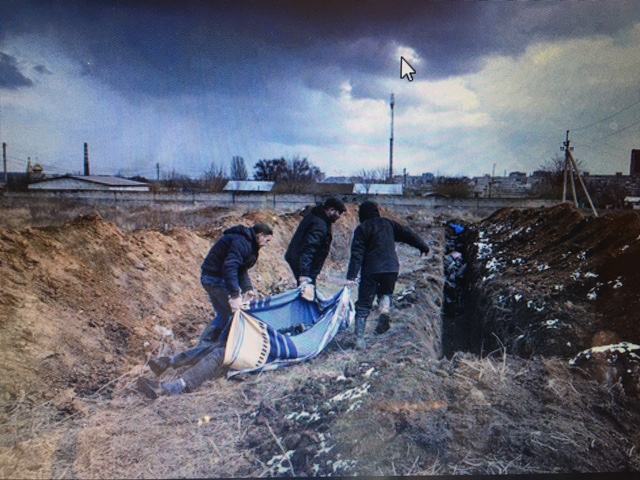 We try, but words fail us here in the West, as we witness in real-time the destruction of Ukrainian cities, the 21st-century annihilation of a people, a culture, a democracy. Some 31 days into an unprovoked war that threatens the carefully-constructed world order after World War II, we all wait, whether within Ukraine or thousands of miles away in the safety of our own Colorado community, to see what will happen next.

We are witnessing siege warfare. This is a military tactic popularized in medieval times; surround a castle or a city, block the exits, prevent food and water from entering, and wait them out. If they wanted to hurry up the process, for good measure toss over a few dead bodies riddled with the plague or smallpox. It is designed to crush a civilian population through violence, disease, starvation, and despair.

As one news anchor said in a shocked voice, “God-forbid — this is genocide.”

It used to be that armies met armies. Since World War II, most casualties of war are not soldiers – they are civilians — women and children. Time and terror do the work of invading soldiers, and it is the civilians who are dying. In this case, Putin’s goal appears to be willing to eliminate the Ukrainian people. He doesn’t want the people; he’s after the territory and the resources.

His cruelty is landing most heavily on Ukrainian children. More than half of Ukraine’s children, 4.5 million children, have been displaced by this unprovoked war. An untold number will be orphaned. 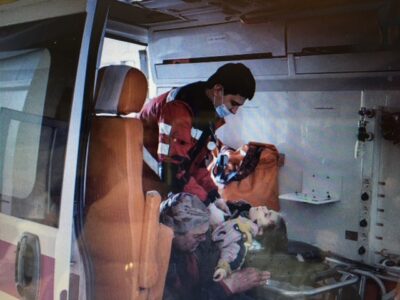 Mariupol child dies as her father looks on. Photo by Associated Press photographer.

The beautiful port town of Mariupol, on the Black Sea, is under siege. Half the city’s population remains trapped. The Deputy Mayor of Mariupol Serhiy Orlov, predicts that there is worse to come. “People are dying without water and food, and I think in the next several days we will count hundreds and thousands of deaths.”

The photos of Mariupol accompanying this story are all provided by Associated Press photographers, who are risking their lives to tell the truth.

“Journalism is the first draft of history” is a quote generally attributed to the Washington Post’s former president and publisher, Philip L. Graham. This history will be written in the blood of children, and in the heroic efforts of ordinary Ukrainians to defend their country.

Mass graves, bodies in the streets, tiny children ripped to shreds by shrapnel. The targeting of residential areas, schools, hospitals, food storage depots, shelter areas clearly marked as a sanctuary for children bombed to rubble. This is purposeful.

Ukrainian President Volodymyr Zelensky, in a speech to the U.S. Congress this week, asked for more weapons. His speech (transcript provided by The New York Times) implored President Biden to be the “leader of peace.” 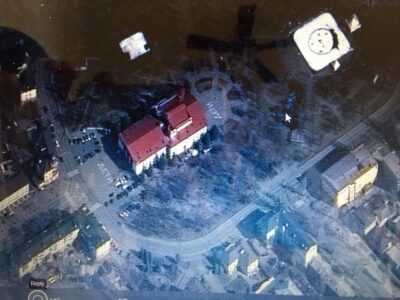 Mariupol Theatre with the words children painted on the ground around the building. More than 1,000 people were inside when it was bombed. There is still no estimate of the number killed. Photo by the Associated Press.

So many people are wringing their hands, some saying none of us could envision this occurring. This is not true. Given what we know about Russia, about President Vladimir Putin and his warped ambitions, this was not a matter of if, but when. He hates everything about the democracy that we hold dear.

A War Against Children

As Ark Valley Voice Managing Editor I truly hate that I predicted Putin’s moves based on my more than 27 years of experience dealing with Russia. This includes eight years as the national chair of the nonprofit Families for Russian and Ukrainian Adoption, Including Neighboring Countries (frua.org).

Putin’s policies and decisions since 2008 have revealed an unquenchable thirst for territory and subjugation that satisfies an alternate reality of empire; one that recreates the Czarist or Soviet empire. In 2008 Russia invaded the Republic of Georgia, and took the region of South Ossetia; as he claimed to “protect persecuted Russian people.” FRUA got involved in moving orphan children out of the war zone.

In 2010 I began two years of consulting with our Dept. of State on a new inter-country adoption agreement with Russia. It was signed in July 2012. In Dec 2012, I witnessed Putin’s cruelty when without warning, he shut down inter-country adoption in Russia. The children became pawns. Hundreds of our adoptive families were in Russia, and their adoptions were canceled. Most of those children remained in Russian orphanages, never adopted. Many of them are likely among the conscripts now fighting Putin’s War against Ukraine.

In 2014 I was invited to join a meeting at the Russian Embassy in Washington, D.C. to discuss reopening inter-country adoptions. They canceled it and the next day Russia invaded Crimea. Once again, FRUA, which had a good working relationship with the Ukrainian government, worked to support orphans.

I witnessed hypocrisy for several years as a delegate to the U.S.-Russia Forum both in Washington, D.C., and in Moscow. In Moscow, I was yelled at by a member of the Russian Duma, and accused of lying about the welfare of Russian-American adoptees and the intent of America; as if the government is something more than a facilitator of what in reality are private adoptions.

Truth did not matter; they saw adoption as some subversive plot. Somehow they couldn’t believe in the human right of every child to grow up in a family that loves and protects them and gives them the support they need to reach their potential. It was a side-impact of the powerful Russian propaganda machine that spews the Kremlin agenda.

At the request of the Department of State over the past 25 years, I have hosted dozens of Russian officials here to inspect the U.S. adoption system. In 2015 following the Russian invasion of Crimea, I walked through the Moscow subways with a friend, who works with disabled Russian orphans, who wore prominent blue and yellow Ukrainian colors. I was nervous. She was defiant. Her attire earned us suspicious looks from our fellow commuters. I worry for her now.

I’ve hosted several members of the Russian media, showing them how free news media reports on government actions; how we support transparency and demand accountability. Sadly, at least a few of them were sucked into state-controlled media (one became a quite prominent RT anchor) and others are believing their own lies.

Biden went on to call out Putin as “a murderous dictator.” This is not a hard argument to make right now, as Russian soldiers continue to indiscriminately shell Ukrainian cities filled with civilians.

After Ukraine, Putin could go on to the Republic of Georgia, Moldova, which are non-NATO countries, then he will eye the Baltics, which are NATO countries. The question becomes: If Putin has nothing to lose, and he isn’t stopped, what comes next?

Featured image: With nearly constant shelling and mounting civilian casualties, the residents of Mariupol have resorted to leaving bodies in the streets and parks until they can bury them in mass graves in Mariupol. AP photo.