Our Voice: The cult of Trump and the ‘quid pro quo’ 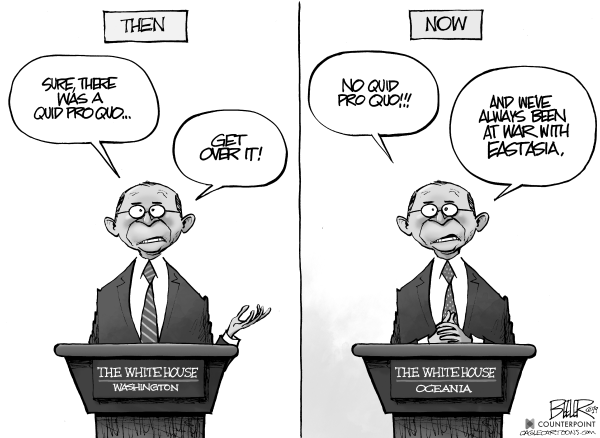 Even The Washington Post has arrived at the point where it calls President Donald Trump’s mind control over his followers a cult. By definition, a cult is a slavishly loyal group lead by a messianic leader, whose followers remain mesmerized and obedient even as his acts grow evermore outrageous.

As the impeachment hearings move into their next phase, the facts in this story are not in dispute; at least not among honest people. Witness after witness testimony before the House Intelligence Committee, made it clear that the president orchestrated a cohesive bribery attempt to coerce another foreign country to interfere in the 2016 U.S. election, putting his personal agenda ahead of the national security of this nation.

The founders of our country, having recently fought a war to free themselves from the tyranny of a king, rightly feared abuse of power by leaders. Article I of the United States Constitution says that the President, Vice President and all civil Officers of the United States, “shall be removed from Office on Impeachment for, and conviction of, Treason, Bribery, or other high Crimes and Misdemeanors”. Treason is only applicable if the country is at war. What constitutes “High crimes and misdemeanors” is left up to Congress to describe. Bribery is simple: the offering of something of value to influence the actions, judgement or conduct of a person holding a public or legal duty.

What used to be the conservative Republican party appears willing to protect Trump at all costs, no matter the loss of their moral compass, the erosion of their character, or their constitutional oath.  The more often they repeat the falsehoods, the more they appear unable to comprehend them as false. In so doing they are actually spreading Russian propaganda. Putin and his Putinites must be dancing on the Arbat these days.

Rep. Devin Nunes (R-Calif.), ranking member on the House Permanent Select Committee on Intelligence, in his opening remarks during hearings two weeks ago said “What we’re seeing among Democrats on the Intelligence Committee is like a cult. These are a group of people loyally following their leader as he bounces from one outlandish conspiracy to another.”

Did he actually hear what he said?

As the congressional impeachment hearing moves into its next phase before the Judicial Committee, the political party that appears to be upending their constitutional duty is not the Democrats.

It hasn’t seemed to matter that Trump’s hand-picked European Ambassador Gordon Sondland threw Trump under the bus to save himself in his congressional testimony. Sondland said he, Energy Secretary Rick Perry, and Mayor Rudy Giuliani, in concert with Secretary of State Mike Pompeo and with the knowledge of White House Chief of Staff Mick Mulvaney and Attorney General William Barr, were following Trump’s direct orders.

The quid pro quo, known in plain English as bribery, wasn’t one July 25 phone call; it was months worth of coordinated pressure. The ask; holding back already appropriated military aid and a meeting at the White House, in exchange for Ukraine cooking up investigations to dirty Trump’s likely political opponent for president, Joe Biden. It should be noted that Trump appeared more fixated on getting the Ukrainian President in front of the mike of a legitimate news organization (CNN) to announce that investigations were being opened on Biden, than actually pursuing an investigation. This is a classic move from the Russia playbook; designed to whitewash mal-information propaganda via a credible media source.

It should be noted that Trump and Republicans are dumping on Ukraine while it is in a hot war with Russia, which invaded its eastern territory in 2014. Ukraine has lost 14,000 citizens to that war. It stands as the fledgling democracy between Russia and our own European, NATO allies and the free world.

A fictional narrative of tribal Trump-ism bubbling along the sidelines also comes straight out of Russian intelligence; that it was Ukraine and not the Russians who interfered in the 2016 elections. Unbelievably, that false narrative is being repeated and mainstreamed by Republican congressional members.

Career foreign service officer and Russian policy expert Fiona Hill, told congressional Republicans to cut it out. “They operate like a super pack – Russian Security services and their proxies are gearing up to attack our election … Please do not promote Russian falsehoods as they only further Russian interests.”

Steven Hassan, one of America’s leading experts in cults and mind control recently provided an eye-opening analysis of Trump and the indoctrination tactics he uses to build a fanatical devotion from his supporters. The first is slavish repetition of only a few phrases, combined with a healthy dose of victim-hood, a distinctly whiny tone, and a startling ability to take a situation, no matter what it is, and divide people. His divisive rhetoric is typically ‘us versus them’, ‘me versus you’. It is about winning at any cost – but only for him.

According to Hassan, “His need to squash alternate information and his insistence of constant ego stroking are all characteristics of other famous cult leaders … there are parallels between our current president and people like Jim Jones, David Koresh, Ron Hubbard and Sun Myung Moon … this presidency is in many ways like a destructive cult …even sane, rational, well-adjusted people can be persuaded to believe the most outrageous ideas.”

Trump is given to unstatesmanlike hyperbole– everything is fantastic, wonderful, fabulous, unless he has decided to attack you. Then you are terrible, hateful, stupid, scum. He does it regularly to his insiders; tweeting away like some dervish, sometimes dozens of tweets per day, the ruder and cruder the tweets, the better. He has refined his pattern of yelling in a loud voice with helicopter blades roaring behind him… it’s an act to make him look more threatening.

As Pulitzer Prize-winning journalist Bob Woodward wrote in “Fear, Trump in the White House”, don’t expect him to remember what he said – or promised. People Woodward interviewed said, “the man is a constant f—ing liar who appears incapable of telling the truth.”

Over the past two years, Trump’s behavior has become both more disturbing and yet increasingly familiar. He rants, He rages. It’s like watching a 14-year-old having the temper tantrum of a two-year-old. There was another 20th century authoritarian dictator that comes to mind as his increasingly unhinged behavior continues. It didn’t end well for Germany, and it put the world through an awful lot of trouble.

Woodward’s carefully documented book reveals insiders say that Trump does not listen, can take no criticism, projects all his failings on to others. They say he has become more authoritarian, more raging, more outrageous, and yet many of his followers remain blindly devoted. Why?

This isn’t a singular event – this is a cohesive case of abuse of power, obstruction of justice and bribery involving the highest levels of the executive branch. I find myself wanting to walk up to the Republicans on the Intelligence Committee to repeat the words of Republican Senator Joseph Welch to 1950s Communist-scare crusader Joe McCarthy, who instituted the Red Scare across 1950s America.

“Have you no sense of decency?” asked Welch. But then again, if he were alive, he might be asking his fellow Republicans the same thing.