Our Voice: The responsibility of the press in a free society

Journalism is the only profession protected by the American Constitution; one of the five fundamental freedoms outlined in the First Amendment. Our responsibility is to tell you the truth – unbiased facts that inform, educate, entertain, celebrate, caution and reveal the actions, and inactions, of our government and our leaders. Journalists also cover community news. This is such a big deal that our founding fathers thought it necessary to write it into the document establishing our rules of law.

In doing so, they clearly communicated that a free press is necessary to assure a free society; transparency being one of the pillars of democracy. And the free press is under attack.

As we go about our work of gathering factual information and reporting, we are called “fake news” by no less than the man currently occupying the White House. His willingness to substitute fantasy for facts undermines the public’s confidence in the media – perhaps by design.

Our role in providing factual and unbiased information is being infiltrated by public relations influence operations, masquerading as news organizations both here and by foreign operators. They spout party lines and marketing messaging, rather than truth.

We point out that some foreign governments such as Russia and China have decades worth of experience in disinformation campaigns. It’s enough to undermine real news organizations as we face what is expected to be a grueling news year. Russia tried out an “influence operation” in Estonia in 2007, which looks suspiciously like their attack on the 2016 U.S. elections. Those same eyes are on the 2020 election.

In country after country, including this one, even our lives are threatened simply for telling the truth — reporting on the events shaping our lives and futures. Most often, if we think about this, we think of danger for reporters in war zones, in drug-invested countries, or working in information-controlling dictatorships like Russia. But in June 2018, a gunman burst into the Annapolis, Maryland newsroom of the historic newspaper, The Capital, killing five employees with a shotgun. It’s down the block from the state capital. I visited it last December.

It’s not just our reporters being attacked. Our news sources are targeted by hackers who attempt to change the news feeds coming to us. They take our stories published in the digital medium and try to alter our words, and the meaning of our articles. And while this attack on the truth is growing, there are a few odd things about the methods in place to protect us – and defend the truth.

I thought about this today as I attempted to load a photo representing the typical airport security process into our WordPress newsroom. The photo was to accompany today’s “Thinking Security” column written by Adam Silverman. They were free images: what is sometimes referred to as “opensource.” But for photo after photo, the action was prevented by my posting room. I switched to a simple illustration of a security checkpoint. Every image was rejected as “this file is not permitted due to security reasons.”

Well – imagine that. Free images, obviously available in a Google search, but not available to attach to a journalistic article about our security measures. 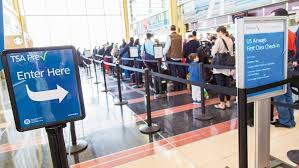 The image that “the system”  finally allowed me to upload.

After finding and saving a few more free images to my laptop (silently chastising myself for not having taken a picture going through airport security at DIA and Reagan National a few weeks ago), I was unsuccessful in uploading them to our press room. Each prompted the same security message. I changed my tactics. I decided to explore whether the labels that I attached to the photos made a difference. Finally, I hit on one featuring a TSA checkpoint, which I labeled mildly as “check-in area.” Success!

Then I got a warning that the size of the image meant it probably wouldn’t be picked up by social media. At that point, I didn’t care – at least one image was working.

But then I thought – maybe it finally let me upload it because it wasn’t big enough to be picked up by search engines.

That experience prompted me to wonder: was this a WordPress thing, or had I, a journalist, somehow found myself on a watch list because of the topics and images that I Google? And, that caused me to wonder: is anything in place related to the violent, threatening, hateful, racist disinformation pouring over social media these days, that might prevent that from reaching us? And is anyone watching who is uploading that filth under the guise of — news?