Our Voice: Victim-hood, Money and Lives Underlie the “Them” versus “Us” Divide 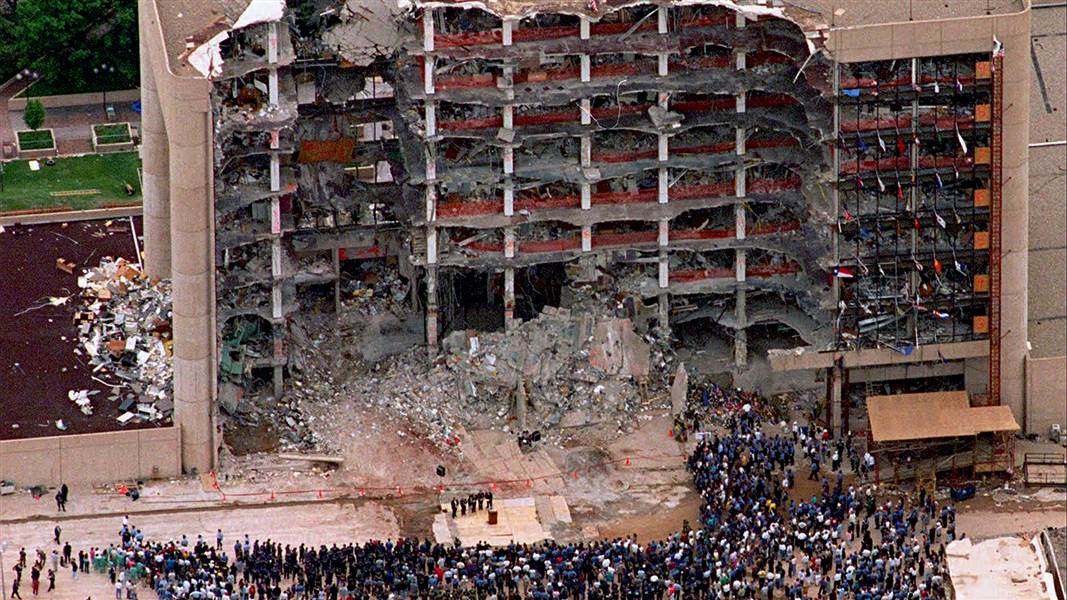 Some of the same forces that brought about the single largest act of domestic terrorism in our county – killing 168 people, including dozens of children, and injuring hundreds more – are percolating below the surface today. In fact, last year was the second highest year for domestic terrorism, with attacks that killed 31 people.

An ABC special report about the bombing anniversary made this stark point: “While threats from [domestic terrorists] have continued to evolve since the Oklahoma City bombing, many of their significant drivers have remained constant. The bulletin pointed to “‘perceptions’ of government ‘overreach,’ reactions to immigration policies, and the advocacy for ‘the superiority of the white race.'”

Lest anyone think this is just a historically fringe element; it is very much alive and well. The images of Trump supporters mobbing the steps of state capitols this past week, adorned in MAGA hats and shirts, demanding “Liberate Michigan”… “Liberate Virginia” … “Liberate Minnesota”… was no accident.

The sight of people with guns on the steps of state capitals, egged on by a barrage of Trump tweets is a warning to the rest of us, of what could be. A procession of cars swarmed the Republican-dominated statehouse in Oklahoma City on Wednesday, with signs that read “stop killing our economy”.

According to The Chicago Tribune these political rallies harken back to the Republican TeaParty efforts, and they are funded and fueled by business power brokers like the Koch brothers, the Hunt family and the Devos family (Billionaire Republican Devos is Secretary of Education), which has benefited mightily from the Iraq War and our military build-up. Big business is behind the fervent push to “reopen America” before we have anything remotely resembling accessible testing for the coronavirus known as COVID-19, or contact tracing so that we can have even a minimum of confidence that it is safe to be in public spaces. 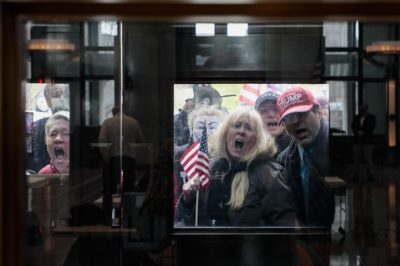 But it is not these business tycoon families out on those capitol steps. These are ordinary people who are believing the falsehoods, and risking their lives – who want to risk ours. Why?

Big business isn’t all that is behind the protests. Street-fighting, far-right groups are also funding and organizing these rallies. Groups with names like the Proud Boys, conservative armed militia groups, religious fundamentalists, anti-vaccination groups and other elements of the radical right.

I’m surely no expert on the motives of fringe elements, but history provides at least two aspects of power fixation, documented in Bill Shirer’s “The Nightmare Years: 1930-1940”, an accounting of the rise of fascism in 1930s Germany, witnessed by a working American journalist.

In 1930’s Germany, the far-right (National Socialist German Workers’ Party, or Nazis), led by Adolf Hitler, got a foothold and took power because business elements there saw fascism as a bulwark against the Russian revolutionaries of communism and socialism, which they feared would disrupt their factories with notions of workers’ rights. Whatever Hitler wanted, he got; the business power elites exhibited a boundless willingness to perpetuate the myth that growth and the economy are worth the loss of freedoms and real human life.

They enabled what history records: throughout the 1930s, their tolerance increased for the “sacrifice of a few undesirables” (Gypsies, Jews, the crippled, mentally handicapped, gays and lesbians, artists and free thinkers, minorities and any Christians who got in the way) who were considered expendable to bring Germany back to its “rightful role” as a business powerhouse. Hitler’s right-wing thugs like the Brown Shirts were happy to enforce the purity myths. In German, the “Sturmabteilung” meant literally “Storm Detachment” and it was the Nazi Party’s original paramilitary wing.

This was justified not just to “make Germany great again,” it fed the second negative aspect of the power structure which needed to be seeded among the masses: victim-hood. To organize a movement around negative emotions and fears, there always needs to be someone to blame. There also has to be an unwillingness to accept responsibility for one’s own actions – it’s much easier to blame someone else.

And blame “them” the German people did; continuously and through a war that tore the world apart. Shirer documented their steadfast refusal to believe that Germany was systematically murdering millions of people – until American generals who liberated the concentration camps made the German people march through their government’s concentration camps — so they could see what they had refused to believe.

Blame is what U.S. President Donald Trump does continuously; a mantra picked up and magnified in a constantly shifting maze of accusations and falsehoods aimed at anyone considered an enemy, including, but not limited to, Democrats, most of our state governors, and American journalists.

I’m not equating one person to another. There are surely some who will tell you that what happened in 1930’s Germany couldn’t possibly happen now. I am not so sure. Human beings and human emotions, especially the negative emotions fueling the current day, are susceptible to manipulation. A real threat to our health and safety is being politicized and turned into a fear-mongering circus.

“So you’re immuno-compromised – stay home. How is it fair that the rest of us have to stay home and can’t work because of a minority?” said one woman marcher at a “Liberate Texas” rally on Saturday, recorded by MSNBC. One wonders if she had a child going through cancer, a parent with Parkinson’s, a sister with diabetes, a neighbor with rheumatoid arthritis, a husband with asthma, would she say the same thing? Would she value their lives over money?

Our country has been locked in fierce debate over whether healthcare is a basic human right. While we all need money to live, what does it say about our society’s values if America actually does begin to value money and power – power and money – over lives? I heard that shocking suggestion this past week from elected officials with old TeaParty connections and from certain media outlets. If this country actually does value money more than lives, then no wonder a certain segment of society fights so vehemently against healthcare for all.

How can blame be assigned by those who need victims, unless the “right to life, liberty and the pursuit of happiness” for those they chose to blame, is denied?