Palace Hotel to Close and Reopen as Condo Residential Building

For the past nine years, Fred and Vicki Klein have owned and operated the Palace Hotel, which was established in 1909.  The Kleins say they have decided to step down from the hospitality business and implement their original plan for the Palace as a residential building.

The suites will be sold off as individual condominiums starting at $165,000. For sale are 14 fully furnished turnkey suites on the top two floors of the building. The Klein’s say they plan on keeping ownership of the back suite and lobby for the time being.

Vicki Klein told Ark Valley Voice “It’s about going back to the original idea. When that building came into our lives (which it did — it came to us), we didn’t go looking for it. We saw it and we loved it and we were able to refurbish it.” The couple started refurbishing the building in 2009 and opened in 2012. The Kleins planned at that time to sell each suite as a condominium. However, there was no condo market in the economy then.

“Fred and I looked at each other and we said ‘well it says hotel on the side of the building’ and Fred looked at me and said ‘go buy beds’. So I did and we got furniture together, but we had never really intended to become hoteliers,” said Klein.

“It was a fluke in many ways that it ended up as a hotel but Fred and I are the type of people that if we’re going to do something we’re going to do it big and bright,” she added. “So we just barreled on into it and got it up and running and it was a huge success. It was really a surprisingly wonderful experience.” 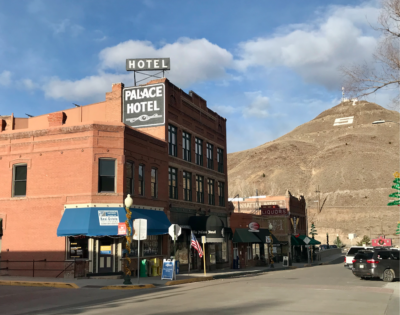 After completing the project, the Klein’s grown children stepped in to help with the hotel. Klein explained  her daughter, son-in-law, and son have “been the driving force behind the business and making it the success that it is today.” Klein hopes that her children will now get to pursue new goals and ambitions.

Klein said that as news of the closure spread, there have been mixed opinions from community members and former hotel guests.

“I know that we’ve had very mixed reviews today [about the news]. There are people upset. If we could be so fortunate to keep it going it would be awesome, but it doesn’t make sense to do that.”

Though the hotel will close, Klein expressed hope for the future of the building.

“We feel it will still afford the opportunity for people to buy those condos which are all livable spaces. Maybe it’s a good place for a young couple to live. The pricing is much more attainable than most real estate in town. So we feel that maybe we can offer that to the community as well as someone wanting to buy it, being a “Front-Ranger”; for a second home, or a vacation rental which is where I think vacation rentals should be is downtown.”

Reflecting on the hotel Klein said “We’ve come full circle. I’m grateful we got to do what we got to do with that building and keep it alive. It was going to burn down when we got it, so I think we made a good and better change for the building and for downtown Salida.”

For more information on the condos email William Roberts at williamrobertsrealty@gmail.com.