Passing the Torch: Four new HRRMC Board Members Sworn In

The torch of leadership was passed Tuesday evening at the Heart of the Rockies Regional Medical Center (HRRMC) board meeting.

Newly-elected board members Dr. Lydia Segal, Bill Alderton and Dean Edwards were sworn in for three-year terms, as was Susan Dunn, elected to a one-year term, and were seated. 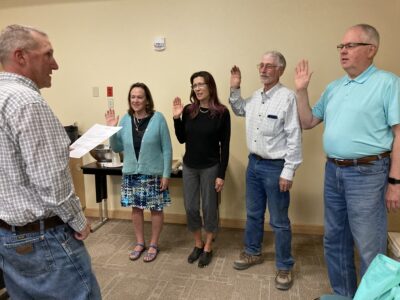 Current member Jeff Post was elected board chairman, replacing Debbie Farrell who was term-limited, as were members Tom Eve and Dr. Harry Payton.

Post then made appointments to various board and committee positions, including Edwards as vice-chair, Dunn as secretary-treasurer, Alderton to the HRRMC Foundation and Strategic Planning Committee, and Dr. Segal to the Performance Improvement and Joint Conference Committees.

Farrell, Payton, and Eve spoke about their long experience on the board developing the hospital district and expansion, for as long as eight years in some cases. Payton remembered back when ‘the financial reports were in the red,’ and described the satisfaction of seeing plans come to fruition. He gave recognition to Vice President of Nursing April Asbury for her work in gaining Gold Star accreditation for the district.

Eve complimented the administrative and hospital staff, saying his experience as both a board member and as a patient showed him their skill and dedication.

Farrell remembered her first exposure to the hospital was in the Emergency Room where a serious medical condition was discovered.  She summarized her long board experience saying, “It’s been an honor to be part of it.”

Morasko also thanked the outgoing board members for their service, having previously said they were the best board he’d worked with in his 35 years as a health administrator.

For the month and year-to-date, revenue variances were seen in three departments; Surgical Services, Pharmacy, and Patient Supplies.

Finance Committee member Edwards echoed Fagerberg in saying they were working on accounts receivable issues she termed ‘challenging,’ as well as the logistics of meeting new requirements for hospitals to begin posting procedure prices online on the hospital website.

In his written report, Julio Nunez, Director of Human Resources, indicated that HRRMC had more than 60 open positions at the end of the month; four each in patient financial services, laboratory, and housekeeping; three each in admissions, cardiopulmonary, surgery, the Buena Vista Health Center and Clinics administration. There were a total of 41 applicants for positions in April, Nunez reported.

HRRMC Foundation Director Lezlie Burkley reported the annual Jewel Ball fundraiser event will be held in person again this year, on Oct. 29 at Mt. Princeton Hot Springs Resort. She also said the foundation received $130,000 from the sale of the Buena Vista Community Health Board Clinic, to be used for a scholarship fund and in-house training for Certified Medical Assistants and Respiratory Therapists. High Country Bank also donated $10,000 to the foundation as a first corporate sponsor and will help sponsor the Jewel Ball.

The Mary Ann Banach Trust issued two more financial transfers to the Foundation, bringing the total to around $358,000. The monies will be used to help fund a hyperbaric wound care center at the hospital, which the foundation will recommend being named for Banach.

The board also heard from a couple, Robin NeJame and Zach Zeiset in the public comment period, regarding procedures and protocols in the Emergency Department, after an emergency visit for Zeiset in 2021. Without disclosing medical details, his treatment by staff was questioned and board chair Debbie Farrell said the matter would be taken under advisement.

In other action, the board approved the purchase of a used Bobcat Skid Steer unit with a sweeper broom attachment. It will be used for cleaning campus roads and parking areas, hauling, and other work at the campus, local clinics, and at campuses in Buena Vista and Westcliffe, at a cost of just under $50,000.

Also approved was the purchase of a new blood transfusion management software system at a cost of $121,018.

The board also approved replacing four 7.5-ton rooftop units for heating, ventilation, and air conditioning at the U.S. 50 medical building at a cost of $64,486.