Peter Hylton-Hinga appointed to BV Board of Trustees

After hearing presentations from and asking questions of three interested applicants at their regular meeting on Tuesday, May 10 , the Buena Vista Board of Trustees appointed Peter Hylton-Hinga to fill the open trustee seat left vacant by the resignation of Norm Nyberg.

Hylton-Hinga, who has been a resident of Buena Vista for a year, will take his seat at the board’s next meeting at 7:00 p.m. on Tuesday, May 24. Hylton-Hinga, Robert Toevs, and Brian Conway had put themselves forward for consideration, sharing statements and taking questions from the trustees. 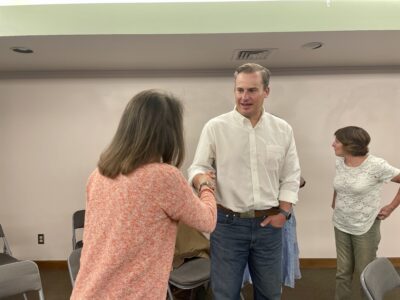 Peter Hylton-Hinga shakes hands with Trustee Gina Lucrezi after being appointed to the BV Board of Trustees. Photo by Hannah Harn.

During the portion for public comment, two attendees spoke in support of Hylton-Hinga.

“Peter is a quiet leader. He’s thoughtful in his approach and he’s so, so bright,” said Wendy Hall. “He and his wife moved here just one short year ago, yet they are already involved in the community and are helping out as much [as they can] where they can. The town and the surrounding county will benefit enormously if Peter is selected to fill the vacated trustee seat… I simply cannot speak strongly enough in support of him.”

Her comments were echoed by Michal Rosenoer, who said the town “[needs] folks like Peter who listen to all sides and are really thoughtful about their community’s future. He’s my neighbor and I’d be so happy to have him on board.

“I understand the difficulties that we’re facing as a community and the kinds of attitudes we need from leaders who can address them,” Rosenoer said. “I’ve known Peter for a long time and I think he’d be a wonderful choice for the town trustees.”

Another attendee spoke in favor of Robert (Bob) Toevs.

“Bob cares about Buena Vista and its future as much as anybody that I know,” shared Mike Thurman, joining the meeting via Zoom. “Bob has a unique gift of… intellectual honesty that supersedes party affiliations and special interests…Buena Vista like every other mountain town in Colorado is facing a very complex future, and it’s one that is going to take a lot of creativity, thoughtfulness, intelligence, and intellectual honesty to get past special interests and figure out what we do to protect our community so that it has the feel and the integrity that we all love…I think Bob would make an excellent candidate for the board.”

In his candidate statement, Toevs spoke about his history in Buena Vista, his work in communications, and his experience “taking on complex issues in high stakes circumstances, gathering the key stakeholders, and doing the hard, collaborative work needed to achieve the best answer for the long haul.”

“Whether you grow up here or take this as your new home, Buena Vista should ultimately be welcoming, accessible, and a thriving community for all who choose to be a neighbor here. We’re all neighbors. That’s of vital importance to me. So if I were to be able to serve on this board, that’s an attitude I would raise.” 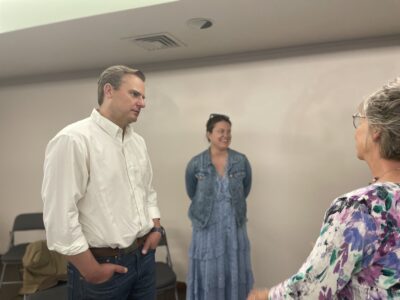 Peter Hylton-Hinga chats with Town Clerk Paula Barnett after being appointed to the BV Board of Trustees. Photo by Hannah Harn

Hylton-Hinga took the floor next, sharing how he and his wife fell in love with the community and decided to raise their family here.

“It’s not just affordable housing and it’s not just asking how we attract any certain industries so that you can have a diversification of industry and have jobs, but also how we manage our resources,” he said. “It’s up to us now, and how we plan for that 10 years from now, 20 years from now, 30 years from now. So, you know, for my future family, I want to be a part of that conversation.”

Conway, who hails from Austin, moved to the valley during the pandemic and has been working in real estate.

“I don’t know how qualified I am for the position but I’m totally a sponge and really enjoy working with people and learning all the new processes,” Conway said. “The first three weeks I was here, I got to meet all the town staff, and that was quite an experience. I got to understand how the rules work and it’s been great working with them in the future.”

When asked what they felt their top two or three priorities were, the candidates discussed growth, sustainable employment, and housing.

“You talk about housing, you talk about affordability, you talk about water,” Toevs said. “Where my eye lands is growth … housing for us … That leads to how we have a sustainable service economy. We can’t have people here that can access the community 365 days a year. We can’t house teachers, we can’t attract talent…Having the most impact on the sustainable, thriving working community is what we need to promote here.”

The board then voted, utilizing a ranked-choice model, and appointed Hylton-Hinga to fill former trustee Norm Nyberg’s empty seat. Later in the meeting, the trustees chose the advisory boards they will be joining. Hylton-Hinga joined the Beautification Advisory Board, Trustee Sue Cobb joined the Airport Advisory Board, and Trustee Gina Lucrezi decided to join the Chamber of Commerce.

Hylton-Hinga will officially join the board at their next regular meeting on Tuesday, May 24. Meetings are held at 7:00 p.m. at the Community Center, 715 East Main Street, and are accessible on Zoom. For more information on meetings, including packets and agendas, or trustees, visit the Buena Vista website.