PfCA Message to the Community: “Stop This Hate” 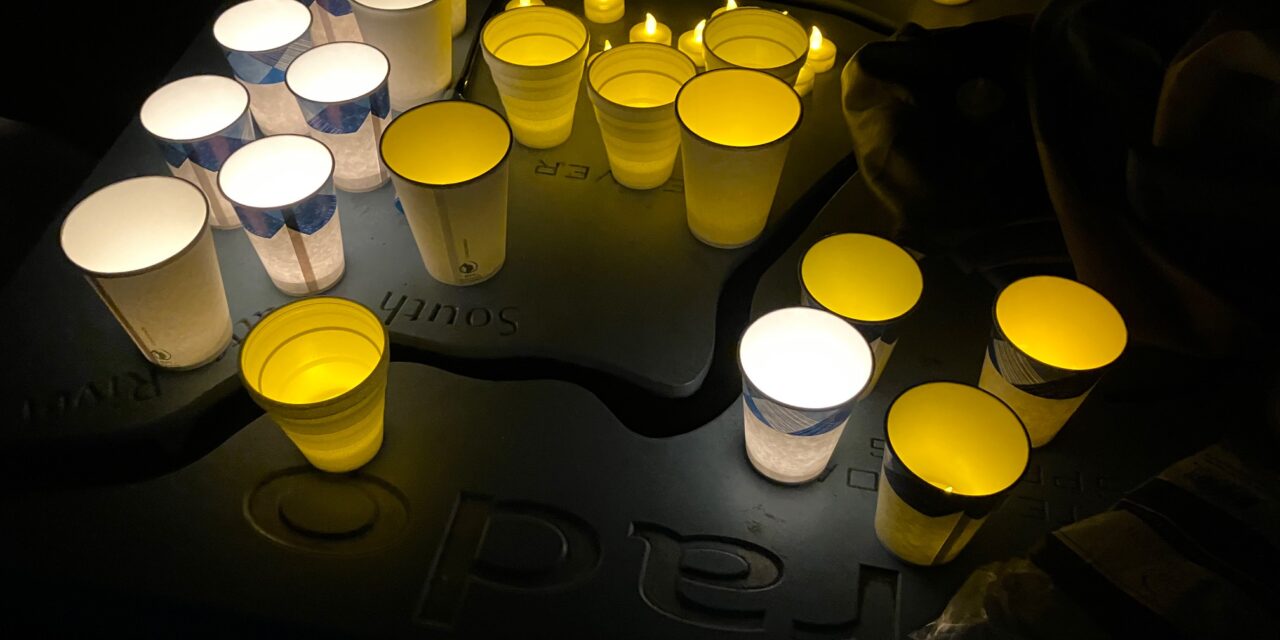 The crowd of about 45 people gathered quietly on Sunday evening along the banks of the Arkansas River in Salida as the Partnership for Community Action (PfCA) has each year, in honor of  Transgender Remembrance Day.

The event was planned, but it took on added significance as the state and the LGBTQ+ community dealt with the murder of five and the injury of at least 25 others at Club Q in Colorado Springs on Saturday evening.

As groups of two and three people quietly joined the small gathering, the sounds of the river were louder than the hushed words of those huddling in the cold darkness. Around us, there were hugs and snatches of conversations that met the sounds of flowing water, expressing shock, grief, sadness, fear — and rage. One by one, candles lit the night and the faces of those gathered became points of light in the darkness.

“Stop the violence that is being fueled by ignorance and privilege,” said PfCA Director of  Policy and Programming Jimmy Sellars about society at large. “We are steeped in a diet of hate – hate is strong energy and it has no other way to leave the body than to harm ourselves — or one another. LGBTQ+ people are told through action, through the news, that we do not matter.”

There has been a massive spike of LBGTQ+ hate speech online in this past year, directed to gays and lesbians. There has been a rise in attacks on the LGBTQ community. Why?

Well, there are probably many supposed reasons but they boil down to this — pure hate directed at people simply for who they are — not for anything they’ve done to anyone else. That difference, it seems is the distinguishing factor — just as Jews, Blacks, immigrants, and anyone that they deem as not acceptable are targeted by hate.

Some of it comes from groups described as Christian —  nationalist groups that these days espouse more hate than Christian love; instigating and joining acts of discrimination, harassment and violence that most of those from mainline Christian churches do not recognize.

Sellars lead the remembrance to those assembled on the banks of the Arkansas River, reading off the names of those trans people who have been murdered because of their differences. For the public, this is the message:

“Last night a 22-year-old man walked into Club Q in Colorado Springs, a place for gathering, joy, and community for Queer People, and began shooting. Our own community in Chaffee County frequents this space and we are still not sure everyone is accounted for.

Five are dead and 25 are injured, some seriously, and our entire world is affected.

These acts of hate affect us rippling out around this world in ways none of us can imagine. We are steeped in a diet of hate – Hate is strong energy and it has no other way to leave the body than to harm ourselves or one another. LGBTQ+ people are told through action, through the news, that we do not matter. That we are to be ‘disappeared’.

Well, we are enough. We are more than enough. And we will not be disappeared.

No matter your beliefs or your spiritual practice, you are not here by accident. It is my belief that we come here together! We make a great pact to learn and grow. We made these plans long before our first breath on our great Mother’s back. As a society, we have been driven to disconnection and we must collectively find our way back to one another. We belong to each other.

So I say NO MORE! Protect trans and nonbinary people! Protect the queer community! Stop the violence that is being fueled by ignorance and privilege. We have so many allies here with us tonight,

Thank you for being here.

I want to say this directly to all of you. The violence that you see perpetrated towards the LGBTQ+ community, the harassment and shame we experience, they do not come from us! All of this that you see around us and what we face every day – does not come from us merely existing. It comes from the non-queer community looking to maintain power and privilege. Non Queer People here tonight…become disruptors! Stop this HATE! You have the power! It MUST come from you.

We are here to honor the deaths of transgender, nonbinary, and Two-Spirit people across the U.S.pfcs who were taken from us through violence. People of color, particularly transgender women of color, face a disproportionate rate of hate, violence, and incarceration. And many of them have been erased – their trans and nonbinary identities lost into the darkness and one way to pull them out is to read them here aloud tonight, to recognize them and their contribution for simply being, and to also to recognize that this number does not include everyone who has been lost. How do we know this? Because one of these beautiful souls that are not listed here was a member of our own community. Her identity was stripped after losing her life – found in a ditch in Texas.

You will notice there are no police here tonight. That is on purpose. Many of the people on this list have been murdered by the police as many of the LGBTQ+ community have been. The youngest on this list is 19 and was killed by her father and the oldest was in their late 50s.

Tonight, we will honor these people and those not listed here. Please say their name after me. For some of these beautiful souls, it may be the last time their name is said aloud.

If you go to the PfCA website you can follow the link to read about each of these beautiful souls and how they were taken from us.

Reading these names brings such a profound deep sadness to me. I work all day every day to find a path forward for our community. To find a way to protect us and yet I can’t. No matter how hard I try.

Hate — is hate. Sellar’s message is that all people matter.