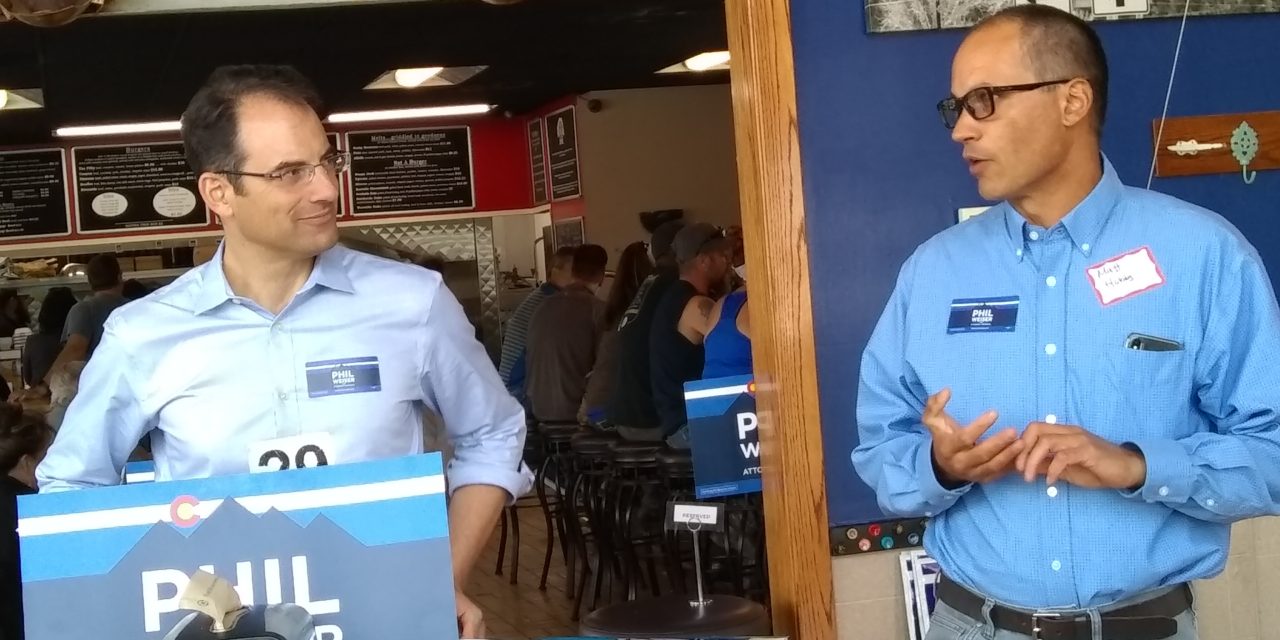 A crowd of about 20 people turned out Wednesday for a meet-and-greet at 50 Burger in Salida with the Democratic candidate for state attorney general, Phil Weiser.

“I am running a people-powered campaign,” said Weiser, referring to the attorney general’s role as “the lawyer for all of Colorado.” Weiser, a specialist in technology law and former dean of the University of Colorado – Boulder law school, served in President Barack Obama’s administration as deputy assistant attorney general in the Department of Justice’s Antitrust Division. Weiser recently won Obama’s endorsement for the Colorado job. 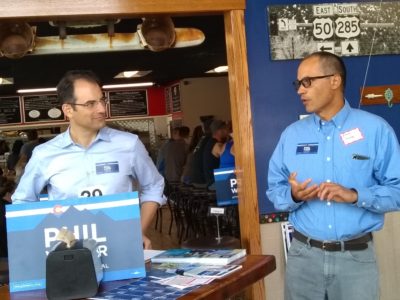 Candidate for Colorado Attorney General, Phil Weiser, left, is introduced during his visit to Salida by local attorney Matt Hobbs.

In his opening remarks, Weiser stressed a commitment to issues that face rural Colorado, including the opioid crisis. “I was speaking with the sheriff of Alamosa County, who told me that 90 percent of the inmates currently in jail there are (heroin) addicts. We are throwing addicts in jail instead of getting them treatment – that’s just wrong.” Weiser said if he becomes attorney general, he will make sure Colorado joins the multi-state lawsuit pending against the manufacturer of OxyContin.

Weiser also referred to taking a strong stand on environmental issues faced by rural Colorado, noting he recently visited Crowley County, which sold almost all of its water rights during the 1970s and has been suffering a small-scale version of the Dust Bowl ever since. Crowley County is facing drastically reduced agricultural production, environmental degradation and dwindling population, he said, emphasizing he would seek creative solutions to interstate water compact issues, as opposed to pursuing lawsuits. “If we are suing other states for water, we are already in trouble.”

Weiser answered questions on a variety of topics. One was on the concept of restorative justice, which seeks alternative solutions to sentencing and jail time for offender rehabilitation. He said supports it because it saves the criminal justice system money while still providing crime victims what they want most – knowing “that the perpetrator is being held accountable.” Weiser said Colorado’s current state attorney general, Cynthia Coffman, is “missing in action” on restorative justice, as well as a variety of other legal issues, including challenging the federal government’s actions to overturn environmental and health care regulations.

When asked how he would have responded to the federal request for voter data, Weiser said,  “I would have advised the secretary of state that the Kobach Commission (on alleged voter fraud) was operating illegally, and not to comply.” Colorado, under Secretary of State Wayne W. Williams, did comply with the request, unlike many other states.

Weiser will face Republican candidate George Brauchler, district attorney for the 18th Judicial District, in November. Coffman, a Republican, declined to run for the office in order to pursue a run for governor.