The Larks Perch Major Subdivision Preliminary Plan came before Planning Commissioners again on Nov. 5, and again, major concerns related to the plan kept it from moving forward. Planning Commissioners chose to continue the decision to a Jan. 14, 2020 meeting, allowing the applicant time to provide answers before making a decision whether or not to recommend approval to Chaffee County Commissioners. The motion to continue was made by David Kelly, seconded by Hank Held and passed unanimously.

The proposed subdivision, southeast of Poncha Springs at 9479 Hutchinson Lane, has been reconfigured to include 14 lots, but still contains steep slopes and multiple major drainages. Staff says that all are thick debris flow areas, especially across lots 13 and 14. 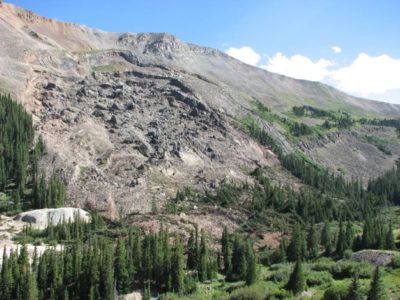 The staff report noted that some of the channel drainage areas along the road are 10 feet deep and that most of the property can’t be accessed from the west side of the Hutchinson Lane. “Flows are observed in all cuts along the drainage,” said Chaffee Planning Manager Jon Roorda. “We need a debris flow assessment and plan.”

Chaffee Engineer Gary Greiner reviewed his concerns about the debris flow areas. “My biggest design concern is that [Project Engineer Tracy VanderVeer] said today he might move the cul du sac to the east. This doesn’t solve the debris flow.”

“Debris flows have a tendency to not stay in their channel,” said Planning Commissioner Bill Baker. “That happens all the time. The channels that you have today may not be where they were.”

VanderVeer said that engineering could address all the concerns that had been raised. He added that this project has been slowed down for months and that he wants a clear direction to allow it to reach Chaffee County Commissioners for a decision. 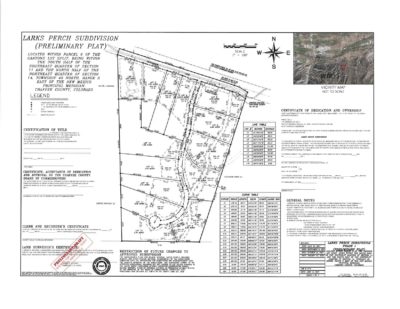 “We are being put in the position of dueling engineers,” said Planning Commissioner Marjo Curgus. “You say you can mitigate. The Army Corps are saying there isn’t enough engineering. I’m not an engineer, but I can say what concerns me.”

During public comment, concerns were raised related to wildlife corridors and the county’s viewshed.

“There is a visual impact for U.S. 50, 285 and 291, and this area is a big game corridor with an east-west corridor,” said Roorda. “The BLM [Bureau of Land Management] requests that a new trail out of this subdivision into the area be prohibited.”

“I live in Little River Ranch – who sticks up for the consumer?” asked Maureen Murphy. “When you have a development like this with so many issues, we’re not educated. We buy these lots. It says ‘engineered soil’ …we don’t understand water or soils….these lots are sold and resold and when people find out they have to bring in 80,000 pounds of soil to prevent their house from falling into a river or ravine – who sticks up for consumers?”

The Planning Commission established a list of information they want the applicant to have ready for the Jan. 14, 2020 meeting:

In other business, the Chaffee County Planning Commissioners agreed upon the wording of a notice of decision approving the AVA Seasonal Employee Campground, limiting it to 70 people, with AVA holding the decision on how to identify those people. A motion was made by Planning Commissioner Hank Held, seconded by Bruce Cogan and passed unanimously.

The approval comes after a Limited Impact Review process, which saw the Planning Commission and Chaffee staff encouraging a public process allowing neighbors of the campground to voice their concerns and have those concerns addressed by AVA.

The Planning Commission also approved the Virga Minor Subdivision Final Plat, located at 6644 CR 110, following a public hearing. The request subdivides 9.4 acres into two lots with minimum lot size being three acres. Applicants Sacha Halenda and Diane French said their purpose was to create a buildable lot next to their residence so that Halenda’s parents could move closer to them. The lot presents challenges, because of a drainage area coming off CR 110, that flows around and into the lot, within the area designated as the building envelope space.

Discussions revealed that the area, which the owner wants to protect with a berm so the residence can be built, is impacted by flow coming off the road. This is a condition created by the construction of the road, not by anything the resident is doing. Halenda said they aren’t intending to irrigate the area and don’t now do so, that they “only water to protect wildflowers that hold the soil together.”

The motion to recommend approval to Chaffee County Commissioners was made by Held, seconded by David Kelly and passed unanimously.