In a marathon meeting that stretched from 6 p.m. Wednesday, September 25 to nearly 1 a.m. Thursday morning, September 26, Chaffee County Planning Commissioners reviewed three development and land use code applications. The fourth, the RGP Industrial Park Major Subdivision Preliminary Plan, was continued to Oct. 29. The majority of time was devoted to two public hearings, including significant objection by neighbors to the one project, the Cool Clear Water Townhouse Major Impact Review, as being outside their expectations for the rural area along CR 160 and CR 161. 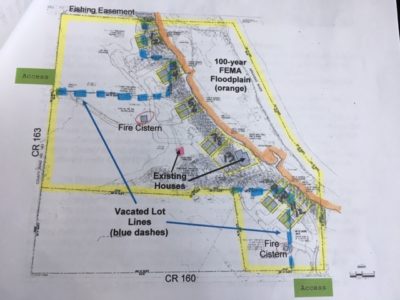 Staff reviewed the proposed site plan: 12 townhouses (six, two-unit town houses) and one lot for the existing single-family home for a total of 13 dwellings on a little more than 26 acres. The proposal protects 90 percent of the parcel as open space.

Staff discussed the changes in the plan since a prior session, including the removal of “inclinators” and concrete patios providing access to the floodplain area and three, long earthen berms proposed to further screen the buildings from the road.

The applicant has agreed to a 25 ft. building height limitation, as well as a 12 ft. in-ground placements for two-story structures, to reduce the view impact.

“This is a first [of its kind] – it’s a site plan [ for town homes outside a municipal area],” said Asst. County Attorney, Daniel Tom. He reminded planning commissioners that once the site plan is approved, then that is when the staff can look at the proposed plat to see if it can be approved. The plan has to move ahead for the other agencies such as Colorado Parks & Wildlife to weigh in. That is also the point when Homeowner Association covenants, maintenance agreements, and shared well and septic system agreements enter the discussion.”

Dozens of neighbors and area residents object to the development during the public hearing. Their reasons varied, with an overriding impression that such a development was out of character with the surrounding rural, single-family home environment. At least one was quite emotional, causing Chair Mike Allen to remind the audience that those who could not maintain civil behavior would be removed.

Several objections were raised; that the view corridor would be disturbed, that traffic, including construction traffic wasn’t wanted and that the project violated the minimum two-acre lot requirement. Objections were raised to a development that might disturb wildlife, that clearing any of the many dead trees on the steep slope down to the wetlands would damage bald eagle habitat,that the placement of the townhouses was objectionable to nearby neighbors, that those who might live or stay there would violate the fishing rights of neighbors. Some raised the prospect that the units would be “sold for a million dollars and turned into short term rentals, not likely to be good neighbors.”

“We live 30 ft. from the northern end of this property,” said Joan Pray. “We own a quarter mile of riverfront. We are also aware that the Cooper property is off limits to all serious anglers.  I am concerned this new proposed development of high-rises and their pets will bring tons of garbage to this area … what are you going to do to assure that the owners and new folks respect our property?”

“This development is wrong on so many levels – this is a rural zone, the intent says to remain rural – this doesn’t do it,” said Doug Welch.

During deliberations, planning commissioners indicated that they feel as if the county is doing more work to design this project than the applicant. They reiterated that the 13 units proposed for the site do average to two acres per unit.

“He could have done a major subdivision with two-acre lot are and that would be allowed,” said Allen. But that would cause significantly more land disruption. He chose this different sort of development, preserving open space.”

It was pointed out that if the parcel were to be divided into 13 single family lots (assuming that many lots could be created given the land conditions) that each single family home is allowed to have an accessory dwelling unit (ADU). This could potentially place more people within the space than town houses.

In the end, with some major conditions, planning commissioners voted to allow the sketch plan to continue to County Commissioner review. The vote on the motion, made by David Kelly and seconded by Bruce Cogan, was five to three. David Kelly, Bill Baker, Mike Allen, Bruce Cogan and Hank Held voted to recommend approval of the sketch plan to county commissioners. JoAnn Allen, Anderson Horne and Terry Lucas voted against it.

The proposal will go before County Commissioners during their Oct. 10 regular meeting.

Planning Commissioners made quick work of the Rio Frio Minor Subdivisions Sketch Plan , submitted by Steve and Laurie Jacobson to subdivide a roughly 27-acre parcel bordering the Arkansas River, into four lots each approximately five acres in size, and two out lots, which will have no residential development.

“Basically we have four children and we’re dividing this to give each one of them a lot,” said Laurie Jacobson. “The out lots are for open space that can be shared by the family. The building lots are flat, with basically no trees.”

She explained that the two planned out lot areas are lower, with trees, some wetlands and springs. Trees on the acreage are on the steep slope going down toward the river; Ponderosa, Pinon and scrub oak, with willows down closer to the river.

Planning Commissioner Bruce Cogan recused himself from deliberations due to his family connection. The vote to approve the subdivision was unanimous, with a motion made by Hank Held, and a second by Bill Baker.

Deliberations for the final item of the night, for Arkansas Valley Adventures Rafting Seasonal Employee Camping Limited Impact Review did not even begin until 10:55 p.m. The seasonal employee campground is located on commercial property at 40671 U.S. 24 . It has been operated by the AVA Rafting Company since 2010. The application is transitioning the permit type from a five-year, “Special Land Use Permit” to a permanent approval as a Limited Impact Review; a change required due to changes in the county’s land use code in 2014. The parcel is zoned “Rural Commercial Recreational”. 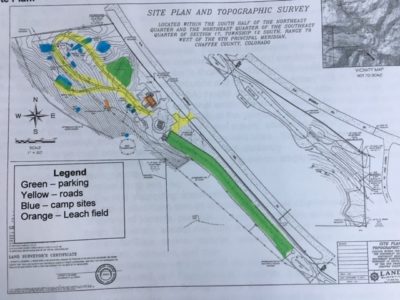 The roughly 40-acre AVA Seasonal Employee Campground is long and narrow, but camping is only allowed in a few small areas.

The staff report said that the seasonal employee campground meets all county requirements, with the exception of the screening or fencing that the county says should be put up to shield the parking area from view of the road.

During the public hearing, neighbors voiced their concerns about noise, trash that attracts bears, trespassing on their neighboring property, and the general unsightliness of the campsite, which is permitted to house 70 employees in tents or campers (the limit of 70 is based upon the parcel’s permitted water supply.)

“It looks more like a homeless camp than a campground,” said Mike Miller. “It isn’t attractive, or orderly – people using the outside areas for their personal sewage … there is always leftover trucks, cars, trailers left by employees….over the winter, that is visible from the highway … the noise comes from them all the time.

“We’ve lived there since 2012,” he continued. “They light fires — doesn’t matter if there is a fire ban, or a designated area — sometimes fire so high I can see the flames over the hill. We been worried about that since we moved there.”

Another neighbor, who borders the campground on the north, said that they had instances of trespassing and wanted fencing put in.

Manager Michael Sheppard, of Breckenridge, said that AVA is very willing to install all the fencing the county says is needed. He noted that the complaints voiced by the neighbors had not gone to him, or his camp coordinator, so they can’t address what they aren’t told is a problem.

Planning Commissioners pointed out that there were conditions related to any approval showing the camp is a responsible community partner, including cleaning up and fencing the property so it looks like an efficiently-run campground. They encouraged neighbors to talk directly with the AVA camp manager regarding concerns and incidents, rather than attempting to pull in county staff or the Sheriff’s Dept.

AVA agreed to install seven-foot high fencing on its northern boundary and to screen along the highway. It is directed to organize over-winter parking of AVA commercial vehicles (and the vehicles they allow to remain on site) in a more organized or more discreet area. The camp will enforce more stringent camp rules (developed with county staff according to state statute), and arrange for periodic campsite inspections during the rafting season

Planning Commission Chair Mike Allen made the motion to approve the permit based upon the conditions, with Bill Baker seconding. It passed unanimously.