In a statement, Polis said “we are taking action to protect individual freedom and protect the privacy of Coloradans. This important step will ensure that Colorado’s thriving economy and workforce are not impacted based on personal health decisions that are wrongly criminalized in other states.”

The executive order also provides protection from criminal or civil judgements against the professional licenses of those who care for women traveling from other states for reproductive care. 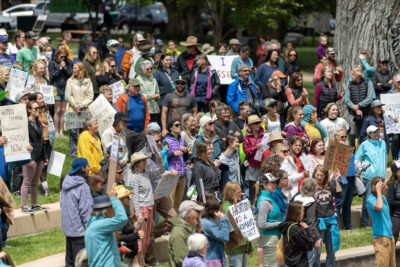 A staunch advocate for abortion rights, Gonzales championed the landmark Reproductive Health Equity Act which updates Colorado’s laws to protect reproductive rights and establishes a fundamental right to choose to continue a pregnancy and give birth or to have an abortion.

“Abortion is health care, and I’m proud that Democrats protected every Coloradan’s ability to make their own reproductive health care decisions free from government interference by passing the landmark Reproductive Health Equity Act this past legislative session,” she said.

“In the wake of the wrong and misguided decision in Dobbs, numerous states have moved and will move to ban abortion outright, and many other states already have “trigger laws” that will ban abortion within 30 days of the Dobbs decision,” reads the Executive Order. “This impending loss of freedom for people around the country poses a threat to the people of Colorado to the extent that other states may seek to infringe on essential rights protected by Colorado law, and impose criminal penalties or civil liability for conduct that is now outlawed in other states, but remains legal in Colorado,” the Executive Order issued by Governor Polis states.

The action further makes it clear that Colorado will not cooperate with criminal or civil investigations in other states for health decisions that are legal in Colorado.

“I will exercise the full extent of my discretion to decline requests for the arrest, surrender, or extradition of any person charged with a criminal violation of a law of another state where the violation alleged involves the provision of, assistance with, securing of, or receipt of reproductive health care, unless the acts forming the basis of the prosecution of the crime charged would also constitute a criminal offense under Colorado law,” the Executive Order concludes.

“I appreciate Governor Polis’ executive order to protect patients and providers because, with abortion access now in jeopardy, or outright banned, in too many Republican-controlled states across the country, this is a crucial time in which we all must do everything that we can to defend these fundamental rights,” added Gonzales. “I’ll continue working alongside providers, advocates, patients, and my colleagues to ensure that every Coloradan, and everyone who travels to Colorado for care, can access the care they need, no matter what.”

The move is made as Republican governors in other states have already taken action to attempt to punish women who may travel across interstate borders to other states to seek medical care.  Polis’s move was mirrored today by North Carolina Governor Roy Cooper (Democrat), who signed a similar executive order. This makes North Carolina an outlier in the south, where surrounding states trigger laws banning abortion are already in effect or will be shortly.