The final agenda item during the July 23 regular meeting of the Poncha Springs Board of Trustees was consideration of the annexation and zoning of a 27.5 acre-parcel at 9991 U.S. Highway 50, also known as the Bagwell Annexation; the total project of 144 dwelling units will include a multifamily housing area that will add 64 smaller townhouse units to the local housing stock. It passed unanimously on a roll call vote.

The Petition of Annexation was submitted during the June 11 Planning and Zoning Commission meeting, and the decision to annex was tabled at the June 18 Board of Trustees to give the board time to hold a work session about the project. Density was one of the major concerns that arose during the work session.

Project Manager Joe DeLuca from the Crabtree Group discussed details concerning the development’s density. The townhouse lots will be duplexes with a 15-foot ditch easement along the lots. He stressed that these lot sizes exceed minimum regulations for both T-3 and T-4 zoning. The multifamily housing zone will have a centrally located park area. Multifamily units will be four-plexes, with one-bedroom apartments sized at 600 square feet per unit, and two-bedrooms that will be 750 square feet per unit. Rental rates for the complex of 64 units have not been determined.

DeLuca addressed the findings of fact regarding concerns that emerged during the work session and the public hearings on the development. The summary of requests for project infrastructure included a four-way stop at Poncha Springs Lane and Poncha Avenue to include a painted crosswalk, with the possibility of a three-way stop upon approval; a six-foot privacy fence along the southern boundary with emergency access gates and signs; and a curb and gutter on the west side of Poncha Springs Lane. The lot on the corner of Poncha Springs Lane and Poncha Avenue is required to be zoned for a duplex.

Based on the infrastructure requests made in the findings, DeLuca asked that the density of the Bagwell Annexation development be approved at annexation. In response, Mayor Ben Scanga noted that code called for a density of 10 units per acre.

DeLuca said the entire parcel was 27.5 acres and there would be 144 dwelling units total – 30 single-family, 25 duplexes and 16 four-plex apartment buildings, which would give a density of 5.6 dwellings per acre. 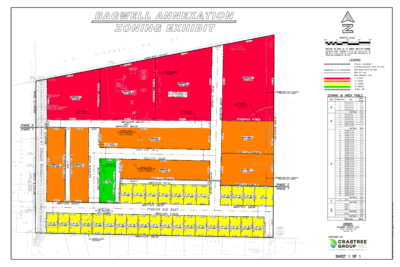 Trustee J.D. Longwell asked about the proposed privacy fence. “Will there be sound-proofing as well as visual barriers? What materials are available? And can this construction go early in the project to help cut down on construction sights and sounds?”

DeLuca replied the fence will go up as part of Phase 1 development – before construction starts but after lot grading. In response to a query from the audience about parking area lighting, he said outdoor lighting will be solar-powered, LED, downward-facing, dark-sky compatible and can be put on timers to dim or bring to full brightness as needed for different times of night. He said lighting would not be tied into the grid to allow for more control on the types of poles and lights that can be installed.

Approval occurred in three stages. First, Scanga made a motion to approve Resolutions 2018-6, the finding of fact. After that, he called for a motion to approve Ordinance 2018-3, the annexation of the property with above-noted improvements to begin in Phase 1 – “owners shall agree that all improvements required by CDOT will be borne by developer, not the town.” Mayor Pro Tem Adrian Quintana seconded, and it was approved.

The third step was a motion by Trustee Darryl Wilson, with Trustee Longwell seconding, to approve as presented Ordinance 2018-4 on the zoning map. All motions were passed unanimously on a roll call vote.

In other business, the Trustees heard presentations from the Upper Arkansas Water Conservancy District and Envision Chaffee County and approved a bid for a water infrastructure improvement project. Scanga called for adjournment at 9 p.m.