During Poncha Springs Board of Trustees meeting on November 23, the board received an update on a geothermal discovery. A geothermal reservoir has been found under the Farrow’s land and near the Poncha Springs water tower. Hank Held and his team believe the reservoir could be used for electricity and other potential economic benefits.

The project started in 2011 with a former Salida City Administrator who received a grant which enabled them to contract with Hendco Services. Held was conducting magnetotelluric surveying at Mount Princeton. In layman’s terms, this is an electromagnetic surveying method used to “map subsurface resistivity variations by measuring naturally occurring electric and magnetic fields on the seabed, or the Earth’s surface.” 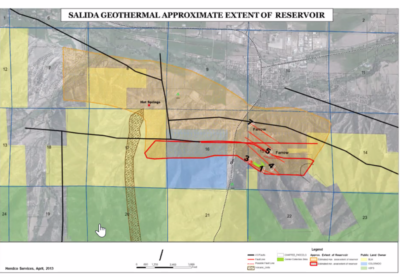 The graphics shows the Ariella extent of reservoir or a prediction of how big and where the reservoir sits. Image Courtesy of Hank Held.

While this research was being conducted at Mount Princeton, the team worked with the City of Salida to conduct further research on properties in Salida, Poncha Springs, and on land owned by the Farrow family. “We got a pretty good result from that,” said Held.

The City Administrator soon changed, and many early City Council supporters of the project stepped down, thus the emphasis on the project shifted. Around 2016 some of the investors also began to back out of the project due to the expiration of investment tax credits and production tax credits, both of which are incentives for exploring geothermal energy resources.

“Obviously we are going into a new era. President-elect Biden has a lot more emphasis on green power and carbon reduction,” explained Held. “The tax laws coincidentally have changed, and the investment tax credit has come back in at the three percent level which is raising investor interest once again.”

Since the project has once again picked up interested, Held reached out to Salida where the city had expressed interest but was unable to take the lead.

Poncha Springs has since taken the lead on the project and plans to move forward with the project. A presentation was given to the Poncha Springs Board of Trustees and since then the Trustees have talked among themselves. Held says they have asked him to prepare a consulting agreement that will run between the Town of Poncha Springs and Mount Princeton Geothermal (MPG). The contract terms state that MPG will work with the town, with no expense to Poncha Springs, to prepare grant applications in the name of the town which, if received, would allow for continued exploration.

“It’s not necessarily the hottest spot. So, while there may be a bigger area, it may not be the hottest water. Basically, what happens in geothermal development is the same thing that happens with oil and gas,” said Held. “The first person that drills in, in this case hopefully the Town of Poncha, would essentially control the resource; however you have to do a reservoir analysis to determine where the water is under the property.

The process of determining where the water lies is called “pooling”. Held explained where they currently predict water to be “A big part we think is further north under the town of Poncha [Springs] and possibly northwest. We determine where the pool is and who above it has the rights.”

In order to generate electricity, water in the reservoir needs to be around 350 degrees.

“What we’re looking for is the hottest water because that’s what you need to develop electricity,” explained Held. “Based on the present work that we have, we think the resource there can only produce two megawatts of power which isn’t very much. We need it further explored to determine the true extent. It could be bigger; we think it’s bigger but it needs more work.”