An incident of careless driving last Thursday afternoon around 1:30 p.m. caused the power outage that paralyzed much of Chaffee County on Aug. 13; from the south end of Buena Vista all the way to the north end of Salida. (Ark Valley Voice reported the outage on the AVV Facebook page within minutes of the occurrence). 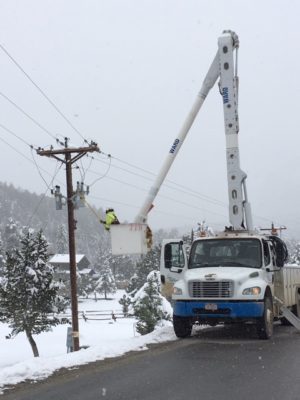 “We had most customers back up and with power in a couple of hours with a temporary fix,” said Sangre de Cristo Electric Association CEO Paul Erikson, speaking to Ark Valley Voice on Friday morning. “But to do a permanent fix my crews are still out there repairing this ten hours later. We expect to complete the repair work early afternoon [Aug. 14]. These were what we call ‘system hardened’ poles and circuitry and they contained significant equipment protecting the power structure for the area.”

The driver was charged with one count of careless driving. The full report by Colorado State Patrol Trooper J. Pikul is still pending. He confirmed that there appeared to be a malfunction of the cement truck boom, which snagged the power poles along CR 162 near the resort. He said witnesses to the accident reported the boom catching on the power lines, power poles being pulled over, live electric lines, and fireballs sparking grass fires along the road.

The witnesses, who gave a statement to Colorado State Patrol, were on their way to a wedding at Mt. Princeton Hot Springs. They got out of the car and stamped out the fires, noting that the driver appeared to be oblivious as to what was occurring behind his truck.

Erikson was brutally honest in his assessment: “It appears he was recklessly driving a piece of heavy equipment in an area that is a 20 miles per hour zone. Our poles are system hardened – they don’t just come out of the ground. We’re extremely lucky that there was no loss of life and that those wedding guests were so brave. Think of the fire danger – the fires he started due to carelessness could have swept right up the canyon!”

ACA has not yet responded to a request for comment.

With the incident report still pending, the name of the driver of the ACA truck has not yet been released. Also not known, the estimate of the length of line that was damaged, or the cost estimate of the damage. Pikul said the incident with the power lines in the early afternoon, coincided with two other accidents he was covering. Both were on U.S. 285; one in mid-county, and the other near Poncha Springs during the heavy traffic from the detour due to the closure of Interstate 70.