Apparently, the manner in which Colorado’s Independent Redistricting Commission is going about redrawing Colorado’s election maps is getting attention for the right reasons. Ark Valley Voice has been in touch with the National Coordinator for Princeton University’s Gerrymandering Project (PGP) to discuss their work and our almost-final maps. 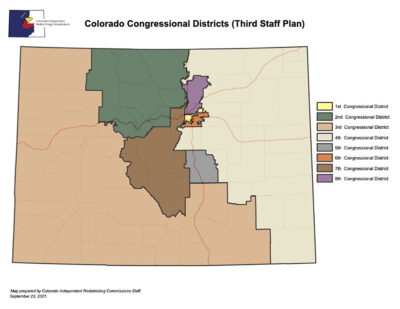 The project is part of a watchdog effort, identifying and tracking regions and areas across the United States where gerrymandering may be occurring. As a nonprofit, the group’s mission is to help fair redistricting in all fifty states.

“This redistricting cycle is the first in which an independent commission, approved by voters in 2018, is in charge of drawing new election maps in Colorado,” explained project coordinators. “Colorado, which was one of the states that willed a commission into law, should be studied closely by other states, and by friends of redistricting. That’s the big takeaway, how Colorado used its commission to come up with decent maps.” 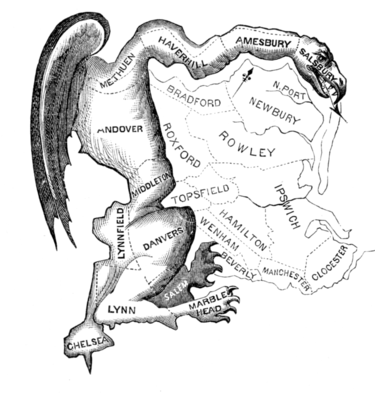 Printed in March 1812, this political cartoon was made in reaction to the newly drawn state senate election district of South Essex created by the Massachusetts legislature to favor the Democratic-Republican Party. The caricature satirizes the bizarre shape of the district as a dragon-like “monster”, and Federalist newspaper editors and others at the time likened it to a salamander. Image courtesy wikipedia.com

For those unfamiliar with the term “gerrymandering”, it means to manipulate the boundaries of (an electoral constituency) so as to favor one party or class. The term is named after Elbridge Gerry,  a powerful voice in the founding of the nation, but today he’s best known for a political practice with an amphibious origin.

To break up the hold of the Federalist party on the state of Massachusetts in 1812, Gerry had the election districts redrawn. The result created a creature-like district stretching from near Boston to the New Hampshire border, where it hooked east along the Merrimack River to the coast. It broke up the stronghold of his rival political party, the Democratic-Republicans.

Over the ensuing centuries, and decades, Gerrymandering has been used to achieve (a result) by manipulating the boundaries of an electoral constituency, for instance; creating a completely safe, reliably Republican or Democratic district.

Colorado’s redistricting rules specifically set Constitutional standards for the redrawing of the maps. The Princeton mapping exercise is tracking our present-day redistricting as maps are being redrawn specifically to match the findings of the 2020 U.S. Census.

The project uses law, data, and outreach to fight for fair districting in the United States. (A list of the full set of Colorado maps that the Princeton Project has studied since June 2021 is below.)

The Princeton Gerrymandering Project does several different things: it provide numbers that prove gerrymandering, draws maps, designs tools to help gerrymandered communities, uses legal analysis, and builds networks of activists and organizations in all fifty states. It also has a program that analyzes and assigns letter grades to redistricting maps.

As the mapping has progressed, the report cards that have graded the effort in Colorado show they have become increasingly fairer. In fact, the most recent map — the 2021 Colorado Third Draft Commission Congressional Map — received an overall grade of “A”, a stronger “A” than it received on the map it drafted only the week before.

Beneath that overall rating, the scoring was broken out as:

Partisan Fairness          A  Giving no advantage to either side

The issue of fairness being paramount, it should be noted that following the link above, one of the first maps to be seen is the mapping of the districts. It is color-coded to show whether residents within the proposed districts may favor Republicans or Democrats, with the eastern plains more heavily Republican, the Western Slope leaning Republican, and the central mountains and Front Range metro area leaning Democratic.

But beneath these rankings, the voter shares for the proposed 7th District, of which Chaffee County is a part, are:

Colorado’s commission has released three draft Congressional plans. The last two both received As in the @princetongerry Report Cards, in cooperation with @representus.  Colorado isn’t the only example where the redistricting maps have been studied -so has Ohio’s effort.

According to PGP’s Senior Legal Analyst Adam Podowitz-Thomas, “These two states both passed reforms to their mapping process in the past decade. Colorado created a citizens commission, truly independent of the legislature, whereas Ohio created a commission staffed with politicians, but trying to bind their hands.”

In the Colorado example,” These maps have been changed over the process, taking into consideration public feedback. For example, the most recent iteration moved Ft. Collins out of the more rural Fourth and into the more urban Second, based on public comment,” wrote Podowitz-Thomas in a recent Twitter post.

Ohio’s maps show quite different grades. “In contrast, Ohio’s statehouse map received an F,” explained Podowitz-Thomas. This map is a Republican gerrymander and, in my own personal opinion, does not comply with the state constitution.”

Sara Swann of the Fulcrum wrote a story about the first round of maps: https://thefulcrum.us/redistricting/redistricting-map-grades.

Commenting on the difference between the Ohio and the Colorado process, Swann wrote: “In contrast, watchdogs highlight Colorado as a leading example for how to curb partisan gerrymandering. This redistricting cycle is the first in which an independent commission, approved by voters in 2018, is in charge of drawing new election maps.”

The lessons that can be learned from this examination are three-fold (at least) says Podowitz-Thomas:

For more information regarding the study methodology, go to: https://gerrymander.princeton.edu/redistricting-report-card-methodology