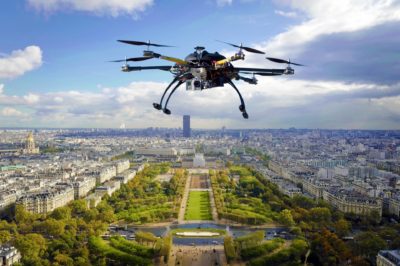 An unmanned aerial vehicle, or drone, in flight. Courtesy photo.

They are only seen at night, flying in mysterious grid patterns in northeastern Colorado and Nebraska, and defying authorities’ efforts to identify who is flying them … and why.

The mystery surrounding the nighttime flights of a squadron of drones in and around Morgan County in Colorado began several weeks ago.

The coordinated flights, reportedly involving up to more than a dozen drones with wingspans estimated by some authorities at six feet, flying in large grid patterns, have been witnessed by residents and law enforcement. Despite inquiries to the military, organizations and businesses, no one has come forward to say the drones are theirs.

A task force of officials met Monday, Jan. 6 in Brush, Colorado to discuss the situation.

The investigation, now involving federal and state officials, including the FBI, has lately focused on finding a command vehicle – a van or truck with antennas visible – controlling and coordinating the squadron’s movements. The Denver Post reports at least one possible such vehicle has been spotted, leading officials to hope it will provide the answer to who’s flying them – and why.

Albrecht and others noted a recent news story may have come close to an explanation of why the flights are occurring.

Sunday, the Colorado Springs Gazette reported on a possible origin of the drones, saying the Air Force Global Strike Command, based in Louisiana, confirmed that it conducts ‘counter-drone exercises’ out of  Francis E. Warren Air Force Base in Cheyenne, WY.

It reported that the command monitors underground Minuteman missile silos spread across northeastern Colorado, southeastern Wyoming and western Nebraska, exactly where the drones have been spotted nightly the past several weeks.

The Gazette reported the Air Force didn’t claim ownership of the drones, but also didn’t deny it. It also didn’t respond to an inquiry whether the sightings were part of the counter-drone program.

An FAA map of the region where the drones have been spotted shows areas where drones are forbidden; this is restricted airspace, presumably above nuclear missile silos.

The Gazette report said the Air Force counter-drone program is operated by the 90th Security Support Squadron at Warren, which includes extensive testing of civilian drones, and using innovative technology including Dedrone, a European system that can track small civilian drones using the radio signals they require for control.

The counter-drone program is one of several the United States Defense Department uses to monitor the unmanned aircraft. The Gazette reported that for missile forces, the cameras on small drones could present a threat; giving an adversary clues on how to attack intercontinental ballistic missile silos, for instance.

Taylor Albrecht, who heads the local Unmanned Aerial Vehicle organization told Ark Valley Voice he had seen reports about the possible military connection to the drones, and feels that may be closest to solving the mystery of what purpose they serve flying those nighttime missions. He added that the suspicious nature of stories surrounding the drone flights isn’t necessarily good for drone’s public image.

“The Central Colorado UAS club exists to help answer the public’s questions, to help expose the positive attributes of drones and what they are doing to the world,” said Albrecht. “The concern I have, whether these operations are military or private, is that they’re a mystery, and we don’t want drone operations to be a mystery to the world. Maybe from a military standpoint they should be ….” he added.

“What we’re doing and what they may be doing, in looking at the (missile) silos or other installations that they have out there …. The Warren Air Base is part of a burgeoning industry called counter-drone, and it’s big. I don’t like the fact it’s a mystery, it’s not serving out industry very well by having it continue to being a mystery, and I’ll be happy to know who it is as well,” he added.

Is this the answer to the nighttime drone flights, or would security concerns keep the military from revealing the truth?

Only time – and further investigation – will tell.