Process of plowing broadband conduit toward Chalk Creek Canyon has begun, sort of

The process of bringing broadband to Chalk Creek Canyon, long lacking in 21st-century connectivity, has had more than a few bumps in the road. After a couple of false starts over the past few years, a public-private partnership of Colorado Central Telecom, Chaffee County and Princeton Holdings (parent company of Mt. Princeton Hot Springs Resort) was the proposed structure behind a $1.62 million CCT grant application to complete broadband in two phases, between U.S. 285 and Alpine. Now it appears that at least one of the partners has grown impatient and is forging ahead on its own.

While Colorado Central Telecom has been awaiting Chaffee County’s negotiations with the U.S. Forest Service for an easement to run fiber optics in the county’s CR 162 right-of-way from Cascade to Alpine, Princeton Holdings, the other private partner in the project, appears to have embarked on phase one on its own. 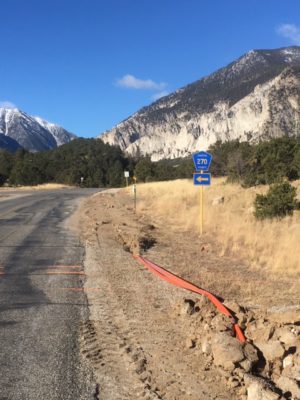 Mears Engineering, on behalf of Mt. Princeton, began plowing in broadband along CR 162 between U.S. 285 and Mt. Princeton Hot Springs Resort, as evidenced in this Oct. 22 photo. (File photo)

Work crews were observed on Monday, Oct. 21, plowing in conduit containing fiber optics on the flat area along CR 162 right-of-way between U.S. 285 and Mt. Princeton. The work, being done by Mears Engineering & Construction services, is unrelated to Colorado Central Telecom. That day it did not appear that Chaffee County had been given much information about the activity either.

“We’re waiting to hear from the county on potential opportunities related to the section above Mt. Princeton, and have no idea what Princeton Holdings is doing,” said CCT Spokesperson Maisie Ramsey. “We’ve been trying to set a meeting with them for the past few weeks, so far without success. Some communications would be good.”

But communications are precisely what hasn’t happened. “The first phase was just to the resort,” added Ramsey. “But it looks like they’re laying it to our [CCT] tower at the top of the hill above Mt. Princeton so that you could surmise from that they are expecting to connect with us.”

Conversations with CCT and Chaffee County reveal that the county is focused on the somewhat delicate steps that must be taken with the U.S. Forest Service, related to the county’s road right-of-way through U.S. forest lands.

“This first phase is being handled by Mt. Princeton’s parent company on their own,” said Commissioner Keith Baker. “It’s the next phase that we’re working on from Mt. Princeton on up to Alpine. The grant came through, but there are issues with getting the forest area easement…getting U.S. Forest Service approval requires impact work, engineering drawings and a lengthy approval. We want DOLA (Dept. of Local Affairs) to advance the money to get through the Forest Service approval process.” 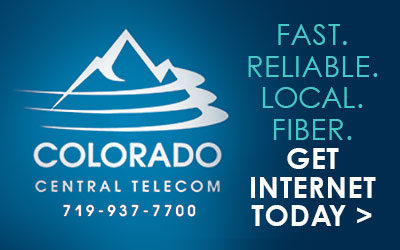 This past spring, Chaffee County and CCT sought public comment to help bolster the chances of a $1.62 million grant application to bring broadband service up CR 162 past Mt. Princeton Hot Springs, to Alpine and other Chalk Creek Canyon locales. The application, submitted in January by Colorado Central Telecom with the support of Mount Princeton Hot Springs Resort and Chaffee County, had to be approved by the Colorado Department of Regulatory Agencies (CDORA).

Fiber-based broadband service is currently unavailable to Chalk Creek Canyon residents west of Mount Princeton Hot Springs. The proposed project would deploy fiber along approximately 13 miles of CR 162 west from the U.S. 24/285 intersection as far as the village of Alpine. The canyon is a dead-end past St. Elmo; much of it with only one road in and one road out, unless one is hearty enough to hike over the Tin Cup trail.

The problem, it appears, is differing views on how broadband should be advanced to Alpine while the county had assumed (erroneously it appears) that it could be laid in the county road right-of-way through the federal forest. The Forest Service says that it should go off the road right-of-way where it meets U.S. Forest land and then proceed up rugged terrain to ride utility poles far above the roadway.

“But that isn’t possible,” said Ramsey. “It’s like two to three miles from Cascade Falls to Alpine. We can’t use the aerial runs there; the terrain is incredibly difficult. We’d still have to go through Forest Service land to get to the poles, which could potentially cause even more impact. Adding to the approval process they say is required is a massive delay in a project that requires grant completion in 24 months. We can’t sign the grant until we know we’ll get Forest Service approval. And saying that CCT is responsible for this is asking a private company to take on an open-ended financial commitment.”

Ramsey said that while CCT hasn’t formally bailed on the project, “We’re basically back to the drawing board on the second phase, and Princeton Holdings is going it alone on the first phase.” She added that they would continue to try to set up a meeting with Mt. Princeton to keep the lines of communications open.

Mt. Princeton chose to refer Ark Valley Voice to Mears Engineering for comment, but calls to them have not yet been returned.

For his part, Baker confirmed that several other Colorado projects had vied for the CDORA broadband grant funding that CCT has been authorized to receive. He said that the county and CCT share the goal of completing fiber up Chalk Creek Canyon.

“The prospect of bringing broadband — which today is an essential utility, even if it is yet to be regulated as such, to an under-served area — is exciting,” said Baker. “There is a significant public safety dimension to the project. Many homes now rely on voice-over-internet (VoIP) for their telephone service, and the St. Elmo-Hancock-Tincup Pass area is one of our most heavily-visited destinations for heritage tourism and backcountry exploration.”

The grant, as initially approved, addresses broadband only as far as Alpine. Once the fiber is installed as far as Alpine, county officials say it could make future broadband deployment more likely. At this point, due to the thousands of tourists who flock to St. Elmo and to the recreational trails in the canyon, the lack of wireless or landline services in the canyon makes it vulnerable should emergencies arise or rescues are needed. The lack of communication access is considered a significant challenge for emergency first responders.