The Chaffee Board of County Commissioners got a crowd surprise on Tuesday, Feb. 18 when the small meeting room of the Chaffee County Annex office in Buena Vista was packed with people spilling out into the hall, wanting to make their opinions heard about the Sleeping Indian Mobile Home Park.

The county had scheduled the public hearing to receive evidence and public comment concerning unoccupied and potentially unsafe mobile homes. Following the public hearing, commissioners made the decision, based upon residents’ concerns, to move forward quickly to take control of the public health and safety issue.

The park, located at 29320 County Road 361, once housed 33 mobile homes and trailers, occupied by senior citizens, single mothers and people on fixed incomes. But in 2013 as the site’s septic systems began to fail and began polluting neighboring wells, civil litigation began. In 2014 neighbors won a judgement and in Feb. 2014 the Department of Public Health announced the park would shut down by summer. But since then the park has sat there unsecured, covered with debris, with deteriorating mobile homes and leaking septic tanks.

“I live next to this and the park is the entire western border of my land,” said Robert Taylor. “ My immediate concern is this is a safety issue. There are pieces of roofing and siding of the trailers flying onto my property – I’ve got photos. There’s probably asbestos. We are having to test our [well] water.” 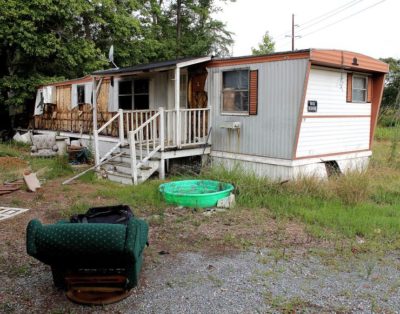 Old, abandoned mobile homes can be magnets for squatters, adding to the unsafe conditions they represent to communities.

Chaffee Fire and Rescue Chief Robert Bertram concurred with Taylor. “With this park initially this was a problem – vacant buildings are the most dangerous things for fire fighters. When we have squatters, we have to decide what to do if something starts. We keep an eye on cars going in and out … we’d like this resolved. It brings the risk of fires, life safety issues, and squatters. It’s structurally unsafe… it’s not a secured area.”

The Sleeping Indian Mobile Home Park is owned by a trust, now led by Darlene Dennis, the daughter of the original owner. Tuesday’s public hearing follows communications that began 18 months ago with the trust by Chaffee County attorney Chip Mortimer, who clarified that the park is in violation of Chaffee County Land Use Code, Article 1 – General Administration, sections 1.5.2, 1.4.1, 1.4.2, 1.4.3, 1.4.5 and 1.5.3.

Neighbors say they are concerned about flying debris, well water contamination, and safety, including people illegally staying in the deteriorating mobile homes.

Earlier that morning, the trust’s lawyer Ryan Robinson sent a letter to Mortimer, stating that the site now holds 29 trailers, only one of which can be renovated, sold and moved. It laid out a plan over the next several years, in which, it is proposed, the income from the trust would be put toward clearing the mobile homes and cleaning up the site. The public was not impressed with the timeline.

Members of the Home Owners Association next door to the park called it “an eyesore. It should be removed. It’s an attractive nuisance for kids. I think a lot of cars are parked in the corner behind the trailers at the end that you can’t see.”

Sharon Miller, who owns several properties around Buena Vista said “I’m very concerned about this … this is blight.”

Another added “there is a leaking septic system from that park – it is broken, all the dirt around it has to be disposed of.”

Bart Cain, the neighbor who has lived across the road from Taylor since 1982 spoke, adding “There are old defunct tanks full of poo all over that property – they just buried them. We’ve got the leech fields from them coming on our property.”

County Engineer Gary Greiner sounded caution for the county, saying “It’s not just the [septic] tanks. You’re forgetting the topsoil – if human waste was pumped on to the soil, that will need remediation too.”

In answer to commissioners’ questions about the legal framework for the county to step in and force action, Mortimer said the county has several options. “We could direct [Director of Development Services] Dan Swallow to go to the property and verify unsafe structures for things like asbestos. We could use the junk ordinance. We could go to the state Department of Public Health about the leaking septic. If we do this, then if the owner does not pay, we’d have the right to sell the property to recover our costs.”

Mortimer, looking down the road for how the county can more quickly address such situations in the future, added, “No one disputes these are abandoned homes…but in other cases, there could be title disputes. At state level, more rights to be able to dispose of these would be good. Also — this should inform our affordable housing discussions for the future. With what we’ve got now – we can get this done.”

“Our first step is to send Chip to negotiate a year or two at most, that’s it,” said Commissioner Greg Felt.

The county’s next steps were set: Swallow will do a property inspection in the next week and Mortimer will be in contact with the trust’s lawyer. The county has scheduled another public hearing on this topic for its Wed. March 4  meeting.

Chaffee County isn’t alone in dealing with an abandoned mobile home  park — the trend of abandoning mobile home parks is growing across America.