“Are you A Member of Antifa?” This was the question Kimi Uno found posted to the window of her Salida storefront Tuesday morning. Kimi, an Asian American, owns the Howl Mercantile at 130 West First Street in downtown Salida.

“I thought it was going to be worse,” said Uno, whose Japanese-American family has experienced this kind of racism before. She thinks the note resulted from her placing a Black Lives Matter (BLM) poster in her storefront window last week.

Yet, the note did not just reference the now universally misidentified Antifa, its author further personally attacked Uno. 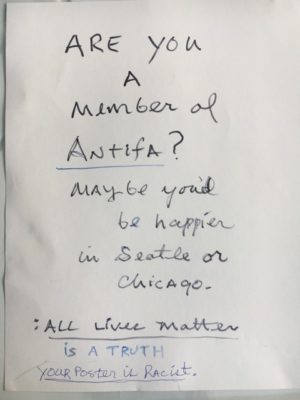 “Maybe you’d be happier in Seattle or Chicago.” the next sentence read.

This was even more alarming to Uno, given she is from Seattle and that is where many of her family members still live.

“This is personal and I think it is a local who knows me and my employee,” she said. Her manager is from Chicago.

In fact, Uno mentioned her aunt and uncle who still reside in Seattle. She said they recently had to postpone a much-anticipated RV trip around Washington State due to racism. This was because of at least one report of a local militia group surrounding and harassing a mixed-race family looking for a RV camping spot thinking they were Antifa. This is a conglomeration of the hyphenated word anti-fascist and has recently been used to mislabel far right extremist groups. “Doesn’t anti-fascist kind of mean pro-democracy, anyways.” Uno said as an aside.

The specific incident Uno referred to occurred in Forks, Washington. Forks is a rural town on the Olympic Peninsula with a population of little more than 3,800 about a three and a half-hour drive from Seattle. Uno couldn’t help but make the comparison to Salida especially given the presence of militia groups identified by Ark Valley Voice. Unfortunately, this personal attack was not the end of the note, either.

The note ends with a stark correlation, “: All Lives Matter is a TRUTH[.] Your Poster is Racist.” Uno, who has an education in multiculturalism and is an experienced anti-racism educator, says this shows a lack of understanding in BLM and the overall systemic problems facing American institutions. She says without acknowledging the problem, well-intentioned white Americans only promulgate its systemic nature. Also, because of her background, Uno, a five year Salida resident has spoken out before on social media about racism in Salida. She believes the note was a culmination of her outspokenness and mixed-race heritage.

While Uno says she has experienced this before, her ten-year-old son has not. He had joined her at work, as he usually does on Tuesdays. She has addressed racism with him before in an academic setting but she says this time was different. Given the personal nature of this note, she initially wanted to hide its painful ugliness. However, she realized this would be hard to avoid. 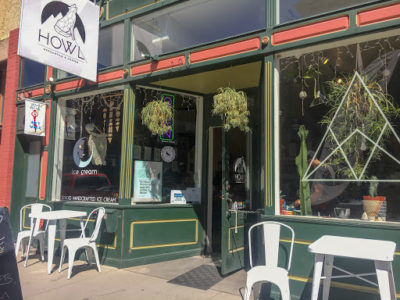 So in a sober and pragmatic tone, she read him the entire note and then showed it to him. Uno said, like most of us he was a little confused, angry, and asked if the store was going to get damaged. Uno reassured him that further damage was unlikely but in any event, it could all be replaced.

At this point, she contacted a friend who recommended she file a police report. She contacted the Salida Police Department and an officer arrived within minutes. She said she was extremely impressed with the officer’s professionalism and empathy toward what had happened to her. The officer collected the poster as evidence but since nothing was broken he said he could only make an incident report. However, he was proactive and encouraged her to see if any similar incidents had occurred with business owners she knows.

Once the police report was filed, Uno took to social media to report the racist note. She said the outpouring of support was almost immediate. People flooded into her store asking questions and offering support. While the support was welcome, she believes apathy toward racism and the BLM cause is still very strong in the community.

According to Uno, this note and its suggested personal attack plainly show Salida is not immune to the systemic racism being protested throughout the nation. Uno says she hopes it becomes a rallying cry for locals to start having difficult discussions about race. Furthermore, she has been surprised by the lack of attention or even acknowledgment concerning the BLM and systemic racism by local leaders.

Uno is currently working with the Ark Valley Equality Network (AVEN) to encourage anti-racism discussions. She also recommends reading some of Colorado Senate Candidate Stephanie Rose Spaulding’s writings about inequality. Ultimately, she hopes to make this painful event a turning point in our community’s understanding of BLM and systemic racism. Ironically, her many visits to Chaffee County and the interaction that helped her and her husband decide to move to Salida may lie at the heart of the problem, as well as the choice now faced by the country.

“We were walking along Riverside Park and one of the middle schoolers looked my husband in the eyes and said, ‘Hi there.’” That sincerity coming from young people Kimi concluded, “The children that grow up here must be different. Like, in a good way.”