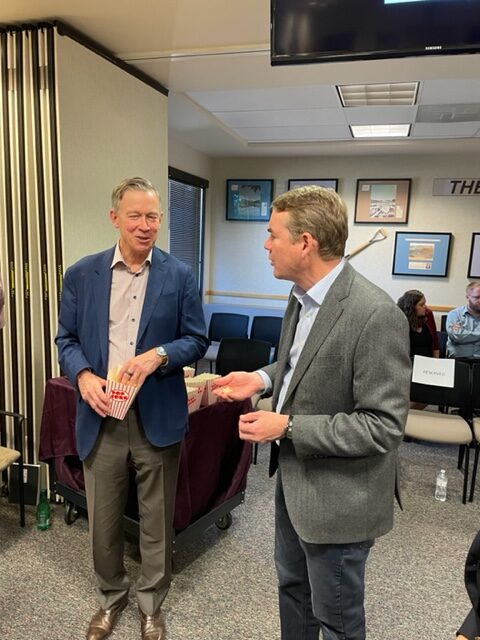 “Colorado’s public lands, especially those that honor our past and diverse history, make us great. That’s why we fight so hard for the next generation,” said Hickenlooper. 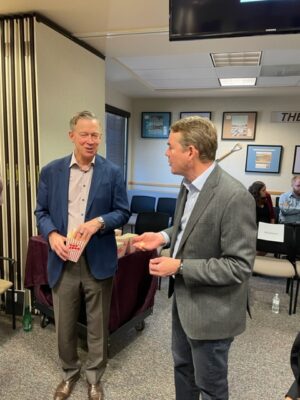 Colorado’s U.S. Senators John Hickenlooper and Michael Bennet joined together with the southeast Colorado Water Conservation Board to announce major funding from the National Infrastructure Bill for the project. Photo by Greg Felt.

“The Sangre de Cristo National Heritage Area has been an incredible resource in helping preserve and restore historic sites within the San Luis Valley,” he added. “Without the resources provided from the National Park Service, we would not have had the means available to make these projects happen.  It has definitely been a blessing to this area.  The economic impact to our counties has been tremendous.”

“On behalf of the Board of County Commissioners of Park County I would like to thank Senator Bennet for his work in obtaining funding for the South Park Heritage Area. Preserving our history for future generations is extremely important to the County, and this will allow us to complete the restoration of the Paris Mill and carry on other projects to ensure we don’t lose the history that has made Park County what it is today,” said Park County Government Commissioner Dick Elsner.

“We are absolutely thrilled to have been included in the reauthorization of several other National Heritage Areas nationwide for another fifteen years. A special thank you to Senators Bennet and Hickenlooper for their support and efforts in this success,” said Sangre de Cristo National Heritage Area Executive Director Julie Chacon. “We would also like to thank our elected officials, board members, previous board members and our many partners in the San Luis Valley and beyond  for their letters and emails of support during this huge team effort.”

“Getting S.1942 passed has been the culmination of bipartisan work across our country. We at the Cache la Poudre River National Heritage Area are thrilled to see our private-public partnerships continue to benefit the region. We are grateful for the leadership of our incredible legislators who championed the heritage areas of Colorado and the 55 National Heritage Areas across this great country,” said Poudre Heritage Alliance Executive Director Sabrina Stoker.

Colorado’s three NHAs were first authorized in 2009 following years of grassroots organizing from stakeholders in their respective regions. NHAs leverage federal NPS funds for historic and cultural preservation projects with the support of counties, tourism, and historic preservation organizations.

Colorado’s National Heritage Areas have all completed notable projects since they were authorized in 2009. At the South Park NHA, NPS funds have helped to restore the endangered Paris Mill near Alma. Within the Sangre de Cristo NHA, funds have helped share the story of the first desegregation case in the nation, Maestas v. Shone. At the Cache La Poudre NHA, NPS funds were leveraged to develop a water education curriculum at the Poudre River that can be accessed across the West.