A standing room only crowd of around 140 Chaffee County residents crowded into the Buena Vista Community Center on Tuesday afternoon, March 19, to join Chaffee County Commissioners for a public work session on Colorado House Bill 19-1177 Extreme Risk Protection Orders, otherwise known as the “Red Flag Bill.” The topic of whether to safeguard the public against people with both mental health issues and access to guns is a public opinion flash point. 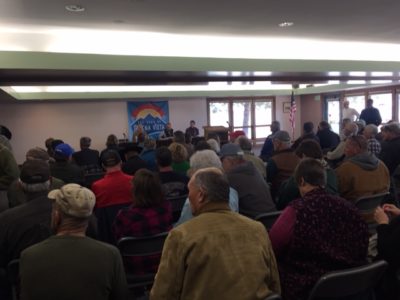 As could have been expected, the crowd was overwhelmingly against the bill, which would put protections in place for families and neighbors of mentally ill gun owners to remove the guns from the gun owners control during an acute episode. Many of the objections focused on the reality that there is little in the bill that addresses the critical shortage of mental health treatment options, no funding for mental health and a token amount available to address any lawsuits which might be brought against local governments, or to help those whose guns might be confiscated during an episode to get their guns returned to them.

“There will be cases where this will be used to kill someone,” said John Cooper. “I’ve been there, I’ve seen it, I was involved.”

If one had a phobia about guns, this public hearing was not the place to be. The room buzzed with an overwhelmingly male audience of gun owners, exchanging more than a few photos on their phones of their gun collections. Their public comments were peppered with references to the second and fifth amendments, while others waved printed copies of the constitution. No one brought up the first amendment.

“It’s just another attempt by the liberal socialists to confiscate our guns,” said Gary Roberts. “They don’t seem to have any regard for the Constitution and the Bill of Rights – presumed innocent until proven guilty doesn’t seem to mean a thing anymore. The burden of innocence falls upon the accused. How does one clear a mental health accusation?”

Many in the room appeared to agree that the combination of mental health issues and guns is a bad combination. But passionate objections swirled around how the law could be used to cheat gun owners out of their homes and inheritance, separate them permanently from their guns, or used by vindictive neighbors to punish neighbors they don’t like. Others said they considered it would be the first step in more government control, while others raised questions about other family safety issues.

“You’re grabbing guns of a suspected dangerous citizen – but do you just leave the children in the home if you suspect a homicidal maniac?” asked Melissa Scott. “How is an unsuspecting citizen to protect themselves from accusations?”

The crowd was generally respectful of other’s opinions, but by hour two, some comments were receiving applause lines from which commissioners had asked them to refrain.

There was no official action taken by the commissioners at this work session, although there were some strident calls for the county to declare itself a “sanctuary county” against enforcement of the bill if it were to pass. 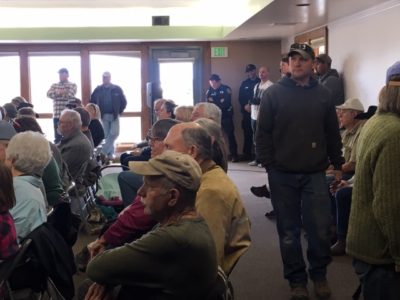 Commissioner Greg Felt cautioned the public about such an approach. “ I have to say that I am deeply conflicted on an intellectual level about the calls for a sanctuary and constitutional county,” said Felt. “I do feel that at the core of the United States Constitution is the separation of powers — before you get into the amendments. In that regard, I do feel that as a county commissioner and the executive of this subdivision of government, it is not my place to decide which laws that come out of the state are to be obeyed.”

He explained that he viewed his role to exercise the law to the best of his authority.

“I was reading a note from a commissioner from another county who said (with this bill) a person must defend their innocence against an action that hasn’t been taken,” said commissioner Rusty Granzella. “We can’t put our first responders in positions where they have to defend themselves.”

Commissioner Keith Baker said he’d been asking questions of the justice department regarding the meanings of terms in the bill and had concerns about the difference in proof between “a preponderance of evidence” and “clear and convincing” evidence.

“There’s a lack of clarity about whether this thing is nailed down….the intent of the law is good,” said Baker. “We do have some mental health issues in the state – it’s a good idea to separate people in acute situations from firearms. But the tough part is how do we do that? We need confidence in a bill that protects people — and protects people’s rights.”

Chaffee County Sheriff John Spezze spoke, saying that he’d been in support of such bills in the past, and believes the state needs something to address the combination of guns and mental health situations with which his office deals, but he can’t support the current bill in its current form.

“Right now I have three people (with mental illness) in custody and we have no facility for them to see anybody. If we take someone in – now we have to release them because we don’t have the facilities or the providers to give them the care they need,” said Spezze. “The funding is lacking and we’re at a crisis stage … the burden of proof is low. The bill language says if the judge decides they need to be held for evaluation. We don’t have the facilities for that!

Asked if the bill passes, what his department would do, Spezze said; “For the sheriff’s office, it’s the safety of people, the safety of the public, the mental health issues, the civil liability. I can’t tell you if we’d enforce it because we’re still seeking legal advice.”

Spezze paused. “The idea behind it is good, but from a sheriff’s standpoint, it has some serious issues and with no funding for mental health care and $119,000 for legal assistance – the commissioners are in a tough spot here. I’m for sending a message in some form that says ‘we need to fix this bill.’ From my professional standpoint give them the chance to make a good decision based on what this law is.”

Felt said that the route he believed the county should take would be to spell out, based on the Constitution, where we stand and get that position to the legislature so that if the bill in its current form doesn’t pass, then a good workable bill could be crafted for a future session. “I think all senators need to hear from us, not just Kerry Donovan,” said Felt. He added that if it were to pass, “a class-action type of lawsuit could be filed by several counties – that would put it in the courts where it belongs.”

There were many requests for county commissioners to schedule an evening hearing on the issue on the southern end of the county, but no decisions have been made at this time about an additional meeting.

The public can view a summary of the text of the bill dated March 8, by going to http://leg.colorado.gov/bills/hb19-1177.

For the record, as of Wednesday, March 20, 26 Colorado counties had declared themselves to be sanctuary counties.

As of Thursday morning, March 21, New Zealand — in the space of one week — following last week’s mass shootings in two mosques in its capital city which killed 50 people and wounded another 50, acted swiftly. It has enacted a ban on all semi-automatic guns and automatic weapons.

Previous articles by Ark Valley Voice on the topic can be accessed here: