Over the past several months, state after state with Republican-controlled legislatures have passed highly restrictive early abortion ban laws. But polls show that passage of the most restrictive abortion laws in decades, go against the views of most Americans, including in states where the bills are being passed. How then are they being passed?

The answer is that in state after state, state legislative districts appear to have been purposely manipulated to reflect Republican agendas and out of sync with the people they are supposed to represent. Take Missouri, where a recent ballot initiative overwhelmingly passed by voters to correct long-term district gerrymandering, just narrowly missed being over-ruled by the Republican-controlled Missouri legislature in the last session.

Missouri is also where some of the more egregious legislation related to women’s rights has been proposed, making it a case study in the behind-the-scenes, state-level hi jinks by Republicans to maintain local and state control. 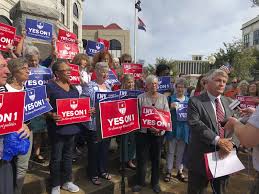 Missouri voters demonstrating in 2018 for passage of the Missouri redistricting ballot issue.

Following the 2016 election, a movement known as Clean Missouri began to gain traction in Missouri, reflecting the public’s dissatisfaction with the highly partisan process shaping the state’s voter districts. That partisan process protects entrenched stronghold areas, with the result that it artificially inflates the Republican presence in the legislature and fails to reflect the state’s population. It became a 2018 ballot issue.

While the ballot question had several components, Clean Missouri’s focus was designed to create a nonpartisan demographer role, taking a stand against partisan gerrymandering. The ballot specified that role to work with separate Missouri House and Missouri Senate committees, charged with overseeing state legislative redistricting to more accurately reflect the population distribution.

Passage meant that by 2022, Democrats were more likely gain seats in Missouri’s Republican-dominated legislature. But in April of this year, as implementation of the public’s decision began, the Republican-controlled legislature set out to undo the Clean Missouri Amendment. With super majorities in both houses, The Missouri House passed HB 48, a resolution reversing the ballot initiative to redrawn Missouri legislative districts, approved only months earlier by two thirds of Missouri voters. But a late May vote in the Senate failed when Senators were suddenly absent for the vote, causing an unforced procedural error.

“Voters made it 100 percent clear in November that they want fair maps in Missouri,” said Sean Nicholson, of Defend the Win, an organization that backed Clean Missouri. “And we aren’t going to sit back as politicians in Jefferson City try to overturn the will of the people.”

In an attempt to add some transparency to the power grab, an amendment, proposed by Rep. Peter Merideth, (D – St. Louis) had been added to the resolution, requiring that the “committee” make public its plan for the map and sharing the data used to create it. 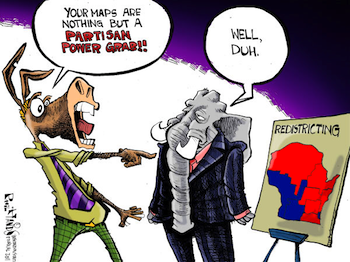 “If what the body feels is that the voters just got it wrong and that politicians in Jefferson City know better, then let’s say that and that we’re going to do our own thing and that we’re going to delete everything that they did. Because that’s what [HB48] does,” Said Rep. Jon Carpenter (D – Kansas City), who admits he’s worried that passage of the resolution would threaten voters’ confidence in their government.

Such actions at state levels underscore a flash point: by 2019, nine states have moved to explicitly outlaw abortion when performed after a certain point early in the pregnancy: Utah, Ohio, Missouri, Kentucky, Arkansas, Louisiana, Alabama, Georgia and Mississippi. More states appear to be considering similar legislation.

The latest poll from the PBS NewsHour, NPR and Marist, show that only 33 percent of Americans support so-called “heartbeat laws” that have gained traction in several states this year. This means 77 percent of Americans are against these laws, which NPR predicts could spark a backlash during the 2020 elections. The same poll found that less than a quarter of U.S. adults support making it a crime for a doctor to perform an abortion, a provision included in the recently-passed Alabama law that bans nearly all abortions.

By and large, these laws prohibit abortions after cardiac activity is detectable, at around six to eight weeks, which can be before a woman realizes she is pregnant. Many of the state-level laws do not even make an exception for cases of rape and incest.

So how is this happening when Americans have shown themselves solidly behind the 1973 Roe v Wade decision: what Supreme Court Justice John Roberts has called “settled law”?

Shortly after their power grab attempt, the Republican-controlled Missouri State Legislature passed a highly restrictive early abortion ban. Then in June, they launched an all-out attempt to shut down the state’s last Planned Parenthood clinic. Then these politicians determined themselves to be doctors, by requiring a second unnecessary and highly invasive pelvic exam and a waiting period before a woman is entitled to an abortion in Missouri. The clinic remains open, for now, under court order.

The conflict highlights the interwoven efforts to impact the nation’s policies, as well as entrenched bias woven into state governments, especially, but not exclusively, in southern states. While there probably is not conclusive proof, let’s state the obvious: it would appear that all these efforts, not just the polarizing surface conflicts, are part of a strategic agenda, designed to protect a power base and thwart the will of the people.

Beneath that lies this: there is a minority in this country that would greatly like to tell the rest of us what to do, especially if one is a woman. (Here’s a challenge – name one law designed to tell a man what to do with his body. If you can, let me know. I’m sure men everywhere would label it enslavement, which is what it is.)

Their insistence that I toe their line can only be seen as an attempt to limit my life, my liberty and my pursuit of happiness.

For more about Missouri redistricting and public sentiment on restrictive early-abortion laws: