Salida City Council received concerns from the citizens around the powers and decision-making process of the Salida Historic Preservation Commission (HPC) during their 6 p.m. meeting June 18. 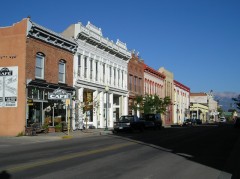 The public hearing was set to hear comments from the citizens on the amendments made to the Salida Municipal Code regarding the powers and duties of the Historic Preservation Commission (HPC). Specifically, the changes concerned the approval process for major and minor activities.

With no further questions from the Salida City Council, the public hearing commenced with the recommendation by the HPC staff for approval of ordinance 2019-10.

Ray Kitson, a Salida business owner and resident, signed up to give comments to the city council in the public hearing before the voting on the second reading of the ordinance.

“I find the process not so great…it’s become a staff decision and not a historical one,” said Ray Kitson during the public hearing. “I find giving them more power and teeth to be ridiculous.”

In response, the council members unanimously explained the benefits in streamlining the approval process on changes to historic buildings. They pointed out that the revisions of Chapters 2 and 16 of the Municipal Code are meant to improve the process. They acknowledged their disappointment around the public criticism of the HPC.

“The HPC is at surface level, with no teeth,” said Councilmember Justin Critelli. “It’s a sharing of the load much like the planning commission…giving more power to this group gives them more responsibility.”

“The criticism of that group should be taken under advisement…I am in support of this [code changes],” said Councilmember Mike Bowers.

The public hearing and discussion closed with the passing of the ordinance and the reassurance that the Salida City Council will work to educate new members of the processes and developing a training like process.

“We took the job seriously and made sure we took good care of interpreting the code by not putting our own personal agendas forward,” said Mayor P.T. Wood. He reminded the audience that he served on the HPC board for 10 years and spoke from experience.

For more on the Salida Historic Preservation Commission go to www.cityofsalida.com/boards-commissions/historic-preservation-commission.