Rise in Crime Throughout Salida, Some Youth-related

July of 2020 was the busiest month on record for the Salida Police Department. There were 720 calls through the city police department. Crime has been going up throughout the city, according to Salida Police Chief Russ Johnson, with one of the biggest issues being car theft. The department is reminding the community to lock their cars. 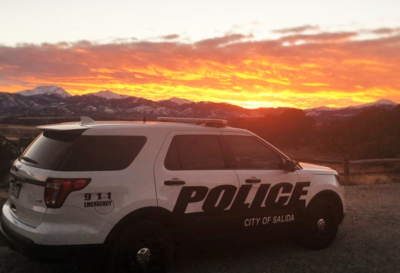 “In the case last week we recovered one of the stolen vehicles with a suspect inside it with the gun sitting on his lap that was stolen out of another car,” said Johnson. “That could have turned into a bad situation if the guy had not put his hands up immediately when he saw the officers. We could have been in a bad situation over the people not locking their vehicles.”

Salida Police have also investigated multiple suspects in relation to the vandalism that has occurred downtown. Signs promoting wearing a mask were slashed and many citizens around Salida have reported their signs promoting and supporting social change and justice have been stolen or tampered with.

The Salida SteamPlant Event Center has seen vandalism from kids riding bikes or skateboards wielding sharpies, and trees have been carved. The event center viewed from Coors Boat Ramp. Photo by Merrell Bergin

Johnson said the department has been dealing with kids down by the SteamPlant riding their bikes or skateboards on city property and using sharpie pens to write on walls and the stairs. Kids have also been carving into the trees in parks across the city as well as writing on the park’s equipment with markers. Though these are not large crimes it causes more work for city staff to go and clean them up.

After interviewing suspects Johnson said the department is no further along with solving the cases. Crimestoppers has posted on their website asking if anyone has any information on the signage vandalism to contact them for a possible reward.

Johnson said in relation to the vandalism occurring throughout town that “It seems to be kids in our opinion. One thing is about masks and one thing is about pride flags, so I don’t think they’re intertwined.”

With school now in session, Salida’s school resource officer will be speaking with youth about this vandalism which should help get more information into the schools.

According to Johnson, with many teenagers being cooped up for half the summer due to the COVID-19 pandemic, there appears to be a rise in bad decision making. COVID-19 has limited after-school programs. Combined with students not being able to frequent the rec center or other activities that traditionally have kept the younger members of the community busy, plus the lack of part-time jobs, this appears to have furthered this behavior.

“I think a lot of that has gotten to a boiling point in the past couple weeks,” said Johnson. “Kids are making some bad choices.” If kids are caught doing so they will be put into a restorative justice program to help clean up vandalism as punishment.