River as teacher: The formation of watersheds, rocks and stewards of the land 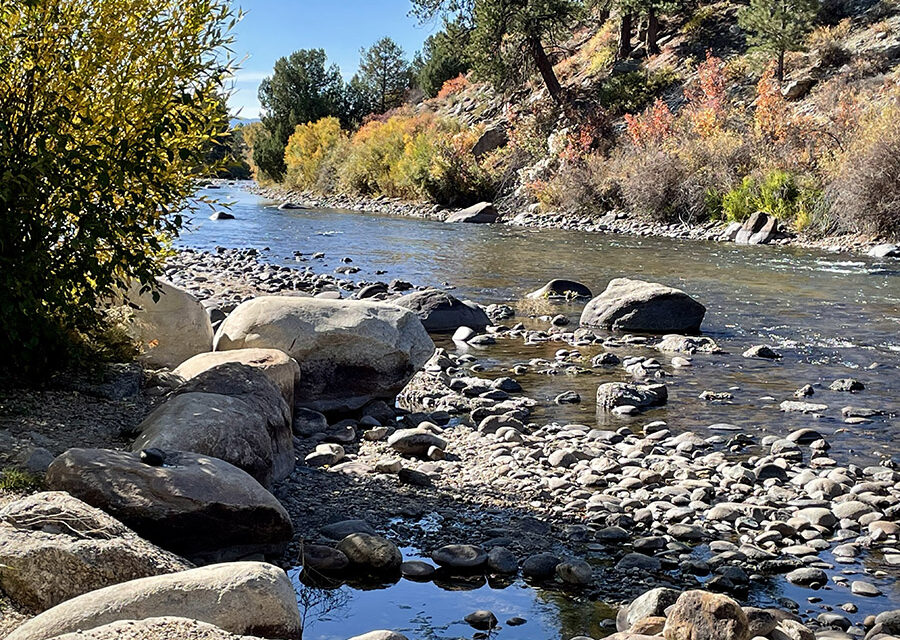 “We must begin thinking like a river if we are to leave a legacy of beauty and life for future generations.” — David R. Brower

In a little slice of paradise alongside the Arkansas River, kids run back and forth from the water, the adults warning them, unsuccessfully, not to get their feet wet.

They’re learning about erosion and how water moves, and their assignment is to create a model watershed in a plastic box. They learn how water and soil interact, and to that point, some of the little watersheds, like some of the big, real ones elsewhere, aren’t faring so well. In the end, the contents of the boxes get rinsed away in the river. 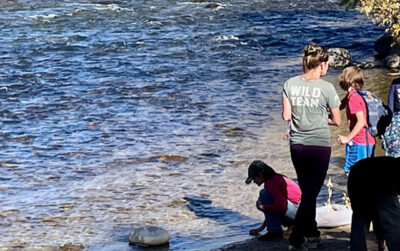 “Can we see erosion?” asks Kelsey King, Programs and Youth Coordinator for Greater Arkansas River Nature Association (GARNA). “What does it look like on the landscape?”

“I think it could look really dirty and destroyed,” another says.

Elsewhere at the Ruby Mountain Campground at Nathrop, Bob Hickey talks to the fourth-graders from Buena Vista’s Avery Parsons Elementary School about geology and how river basins are created. Well known hereabouts as a volunteer geologist who leads hikers to a better understanding of how rock formations and things work, Hickey is prepared when young hands shoot up.

“Are any of these mountains volcanoes?” a boy asks. It’s clear he isn’t going to take no for an answer. Hickey says yes, and that Bald Mountain, part of the Nathrop region, is a dormant one as opposed to a volcano that is extinct. There is hope, in other words. 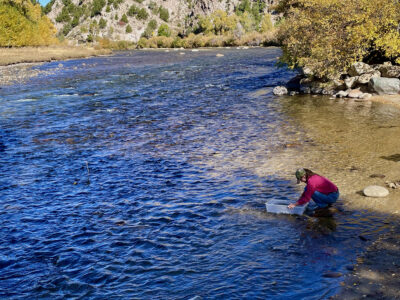 A young student completes a project on water erosion at the Ruby Mountain Campground on the Arkansas River. Photo/Tara Flanagan

The Oct. 7 outing echoed a growing trend toward outdoor education. A bright and often necessary spot in some schools during the tougher days of the COVID-19 pandemic, outdoors learning showed what research had already established about kids developing confidence and using their senses to learn.

While the field trip wasn’t entirely focused on water, the Arkansas River was, as always, a teacher.

King says kids in Chaffee County are able to look at where they are – relatively close to the Arkansas headwaters that flow out of the Sawatch and Mosquito ranges near Leadville – and learn about the river’s path and purpose as it flows to the Gulf of Mexico.

On Thursday the kids examined a mobile model of the Upper Arkansas River Basin, which shows the basics of trans-basin water diversion, storage and hydropower. Students talked about the Mount Elbert Forebay and Powerplant near Leadville, for example, and were able to answer questions about where the water travels and the many ways the scarce resource gets used.

On a sadder note, perhaps, she notes that three-quarters of the kids on the trip had not been to Ruby Mountain before.

“Part of our goal is to show youth it’s there for them,” King says, adding that it can only help the river’s story if kids buy in as protectors. Next week, a similar trip is planned for sixth-graders, who will dive deeper into river ecology. 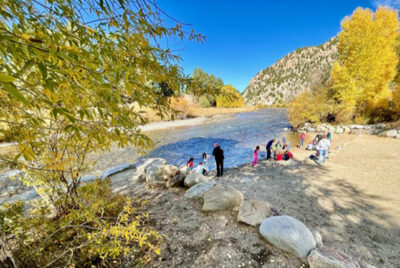 A group of students and advisors gathers on the shore of the Arkansas River. Photo/Tara Flanagan

Part of the deal, King says, is keeping a fish alive for a week. She says this probably gets the kids in a more reflective frame of mind when they head out to fish in their fourth and final session. 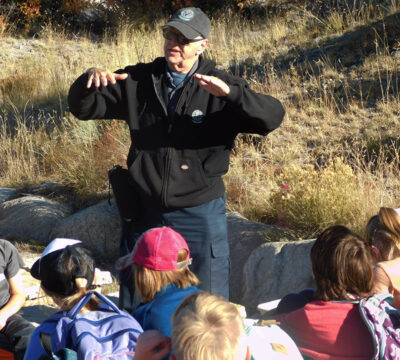 Bob Hickey talks to students about local geology and how the Arkansas River Basin came to be. Photo/Tara Flanagan

These days, education concerning rivers or anything pertaining to the planet usually collides with the emerging realities of climate change: warmer air, snowpacks, that when melting, get drawn into parched soil instead of flowing to waterways, and challenged water resources as a result.

King says there are ways to enter that conversation and set off fewer political alarms. “I like to refer to it as ‘global weirding’,” she says. “When it’s weird, it’s notable. I find when I use that wording that I don’t get the pushback.”

Thursday’s field trip was perhaps as much about connection as it was about science. “I had a student say today how nice it was to hear the river,” King says. “I think there’s this primal, biological thing that we tap into when we’re near running water.”

Editor’s note: In late July, Gates Family Foundation and the Colorado News Collaborative announced that Ark Valley Voice (AVV) Journalist Tara Flanagan was awarded a water fellowship, to participate in a statewide newsroom effort to strengthen water reporting at newsrooms across Colorado. The Power of Water looks at the all-important role of the resource in people’s lives.