The Bureau of Land Management Royal Gorge Field Office has issued a decision that will reroute a severely damaged section of the Rainbow Trail near Coaldale from the adjacent San Isabel National Forest to BLM-managed land. The trail, previously located in Wolf Creek drainage, was damaged beyond repair in flooding that occurred after the 2016 Hayden Pass fire.

In addition to routing approximately 3.9 miles of the trail through BLM lands, an access point will allow space for trailer-friendly turnaround and limited parking beyond the end of Fremont County Road 40. The reconstructed section of the Rainbow Trail will be open to foot, equestrian, bicycle, e-bike, and motorized single-track use, consistent with the section of trail being replaced. 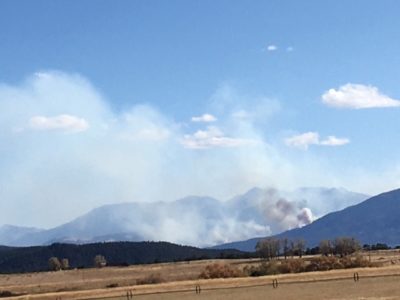 The Decker Fire jumped the Rainbow Trail on Methodist Mountain, with dark smoke plumes visible even on Monday, Oct. 14, 2019. Photo by Jan Wondra.

Royal Gorge Field Manager Keith Berger explained “The Rainbow Trail is an important recreational resource for the local area and for the region. This was an unusually complex resource decision that will make the trail sustainable and provide access for trail users into the future.”

The Hayden Pass Fire burned part of the Rainbow Trail’s original route near Coaldale in 2016. Post-fire flooding in the Wolf Creek drainage in subsequent years destroyed a 3.3-mile section of the trail.

Alternative routes were explored to keep the trail on US Forest Service lands but those were found to be unsustainable due to steep terrain, erosive soils, and continued risk of flooding. Construction on the rerouted section of trail is expected to begin in 2022.

The Final Environmental Assessment and other documents can be found on
the BLM’s ePlanning website.