Ruffled feathers on Pinon Ridge create a flap over chickens

Up on rural Methodist Mountain, it appears that 11 chickens have ruffled a whole bunch of feathers. Their owner, full-time resident Tres Jones, has been served a citation violation from the area’s overlapping property owners associations (POA). Jones says the chickens are pets and will provide eggs for the family when they begin to lay.

The citation says that Jones has to remove his chickens from his property located at 5614 Pinon Ridge Trail. It claims that if he does not, they (the Property Owners Board) have the right to enter his property within 14 days of written notice of their intent to do so and remove what they deem as a covenant violation. It was served in an Aug. 2 letter from the President of the King Gulch POA (on behalf of Pinon Ridge West and South POA) Ken Matthews, following a POA meeting that Jones says wasn’t properly noticed. 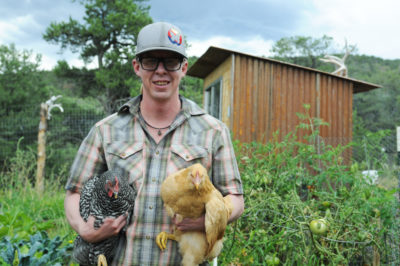 Tres Jones with his pet chickens, Grey Girl and Trixie. Chickens owned by Jones are at the heart of a property use conflict up on Pinon Trail on Methodist Mountain. Photo credit. S. Hobbs

The City of Salida has no limit on the number of chickens on city lots, as long as the directive is followed that “any fowl cannot become obnoxious by reason of odors, uncleanliness, disease or omitting loud noise … so as to disturb the peace of any neighborhood and family”.

Buena Vista allows up to six chickens in town with a farm animal permit and Chaffee County itself has no limitations on the number of chickens that can be housed on rural residential lots.

Poncha Springs allows up to six hens without a permit (Although Town Administrator Brian Berger said there is one subdivision HOA that has stricter rules than the rest of the town). None of the municipalities allows roosters. Both Murdoch’s in Salida and Tractor Supply in Buena Vista sell baby chicks every spring.

In serving Jones, it appears the POA leaders are choosing to enforce one of two portions of the POA covenants referencing birds: “No animals, livestock or poultry of any kind shall be raised, bred or kept on any lot except as permitted.” But after that section, the covenants include birds as among the approved pets in the roughly 143-acre subdivision.

The area on Methodist Mountain lies past the end of the BLM trailhead along CR 110, becoming Pinon Ridge Trail, dead-ending in the subdivision. The subdivision of rural-zoned lots, that range from around three acres to more than six acres, with an average lot size of 6.5 acres, was created by the late Jeff Auxier.

Jones, a Salida Schools special education teacher, bought his 3.3-acre parcel in 2012 and built his first structure on the property three-and-a-half years ago. His chicken coop, which matches the house finishes, has a bird run that contains the hens. He now has two, GPS-wearing coon hounds to protect against predators.

Jones is a member of the board of two of the three overlapping POAs; Pinon Ridge South and West POAs. He says he is completely shocked by the uproar over his pet chickens.

“Herb [Smith] trespassed on my property to even know my pet chickens were there. It isn’t like I have a rooster,” said Jones.

There are 22 total lots in greater King Gulch, and Jones says that contrary to what the POA board says, many lot owners are in support of his chickens and several wrote letters of support. He doesn’t know if the board considered that at all.

“I asked my neighbors above and below me, and they both said fine – so were others — every one of them wrote a letter of support telling [the board] they are in favor of the chickens.”

Wayne and Sue Glascow wrote to the POA saying “We wish to state for the record that we have no issues with Tres raising chickens. Tres did not try to hide this from us and even asked us if we had any concerns with it. We have never heard noise from his hens, nor would we have known that he had them if he had not shown them to us.”

Jones says he doesn’t think the brouhaha is only about his chickens, it might be about his house. “This place is my dream. I biked here, that’s how I found it. I saved to buy the land. I built the accessory dwelling unit first. There is nothing in the POA that says I had to build the big house first. It was a sold to me as a right that I could build the accessory building first. I met the design requirements, but there were two people on the design committee who said they thought the home values were going to go down and accused me of trying to circumnavigate the POA. They even asked if I had the money to build the main house. So now I serve on the POA design committee to make sure they never did that to anyone else.”

According to Jones, it is not true, as some claim, that Auxier intended it as a wealthy enclave (some structures are second homes). “Jeff told me he was in favor of working-class Salidans buying here – to live into our dreams. After the house was built, then I got to know Jeff Auxier. He would come out here and sit on my deck and look out on all this. He told me he was glad I was here – that he wanted regular people like me to be able to live here. But when they objected to my design, they actually called Auxier and asked him what his ‘intent’ was when he created those original POA documents,” said Jones.

Jones said the disagreement is interpretation. He says that Smith came to his home “and chewed me out about this. I asked Ken [Matthews, POA president] why the chickens were a problem. Apparently, he didn’t know that Salida allows chickens. But he said, ‘No, the problem is you not respecting our covenants.’ Well I read the covenants and I read that I’m allowed to have my hens.” According to Jones [and several of the neighbors] “If you look up the definition of chicken in the dictionary, it’s going to say its a bird!”

Many of Jones’ neighbors agree. Andy Majeski wrote to the POA saying, “It has come to my attention that there has been some discussion about whether or not we can have chickens. According to the covenants, we can have pet chickens as long as it is not for commercial use and it is a reasonable number of birds. Jenny and I would like to have a small chicken coop once we get all settled in up here as well. Hopefully, we can all come to an agreement.”

Jones is deciding what his response to the citation will be.